Collecting information via a form embedded on a website

Posted on September 8, 2014 by Jason Ruffell

Collecting data via a form is easy enough to do. Google forms can be embedded in to any webpage that supports iframes. This includes stand-alone HTML pages, WordPress sites and most Content Management Systems (CMS).

Once you have created your Form go to ‘File’, then ‘Embed’. In the new dialogue box you will be presented with your iframe code which will look something like this:

Copy and paste this code in to your HTML code or code editor within your site. The width and height of the iframe may need altering to get the form to fit nicely on your page depending on how long or short your form is.

Any updates you make to your from will automatically be reflected on your site. Any data entered will be input directly to the corresponding Spreadsheet. 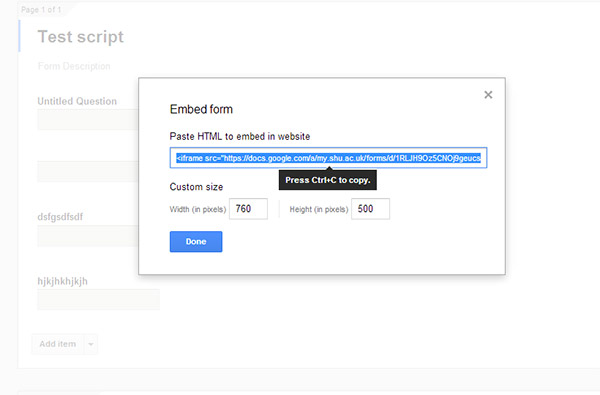 The East Sheffield awards are run every year to acknowledge the best independent restaurants, cafes, pubs and food and drink retailers in Sheffield and the surrounding area. Several of the categories are open to a public vote.

The Eat Sheffield Site was developed in WordPress, it lists the independent retailers that make the Sheffield food scene the success that it is. This meant embedding the Forms iframe was easy.

Google Forms were used to collect the public votes. Five Forms were created, each with a drop down selection of all the restaurants/organisations in that category. The lists were generated from the organisations listed on the Eat Sheffield website. A free text area was also included in each form to collect any nominations that were not included on the lists. These organisations, if they met the Eat Sheffield criteria were then contacted to see if they wished to be included on the site. 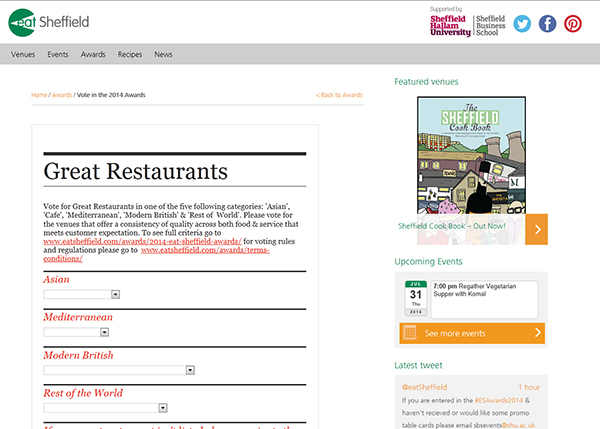 Five forms were embedded on a single page within the site to collect votes on the five categories the public could vote for, Great Restaurants, Great Cafes, Great Traditional Pub, Great Food – Retail & Producer and Best Event. Each form was linked to a different Sheet so that the votes could be easily counted.

The winners were notified and invited to an awards ceremony in October.