GoPro cameras have been around for a few years now, allowing the adventurous to capture their exploits in high resolution video. The latest incarnation has added Wi-Fi allowing the user to activate the camera from an app that can be downloaded to an iPad or Android device.

When I was asked to film the Managing Food & Beverage Operations students producing their concepts in the kitchen in Owen on the 12th floor it seemed like a daunting task. Filming multiple viewpoints at once whilst trying to be as unobtrusive as possible, allowing the students and customers to act natural so their behaviour could be assessed. 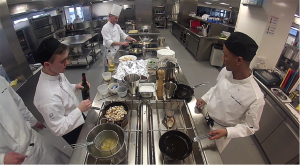 The new GoPro camera and range of mounts available provided the perfect solution. Cameras could be set up in both the kitchen and dining area using a range of mounts, such as mini tripods and suction cups to capture the action as it unfolded.

Six cameras were used, two in the dining area and four in the kitchen. Each could be set up with its own wife frequency via GoPro’s website. Once each camera was configured it allowed us to connect to it via the Wi-Fi setting on the iPad. After selecting the camera in the Wi-Fi settings the app was opened and the camera could be accessed. It could be turned on and off to save battery life and all the functions and settings changed to deal with the situation as things unfolded. This allowed us to stand to one side and watch the action, switching cameras and recording when things happened. We were also able to capture the students working ‘front of house’ without disturbing the customers. 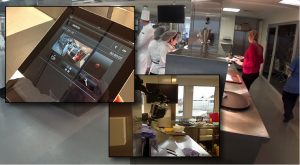 Recording on the GoPro via the app on the iPad

Short sequences were shot on a Nexus tablet to help break up the final edit and capture footage when audio was important, such as the ‘Chefs’ and ‘Front of House’ briefings. Due to time constraints the tutors filmed their feedback to the group on an iPod Touch themselves and this footage was then spliced in to the final edit.

After each session the footage was edited and stitched together to allow students to assess and peer review their performance during each concept so that they could improve in future sessions. Filming took place over six weeks, covering 30 sessions. The concepts were based around the themes of ‘American Diner’, ‘A Taste of Brazil’, ‘A Real Italian Kitchen’, ‘British Gastro Pub’, and ‘A Taste of Yorkshire’ and in the final week Christmas Lunch.

As the sessions progressed a marked difference in the student’s behaviour was observed as their confidence grew and they felt more comfortable in the working environment. Documenting these sessions has allowed both student and tutor to reflect on their performance and has become an important part of their learning process.

Like Loading...
This entry was posted in filming, Innovation, New features, peer feedback, peer reflection. Bookmark the permalink.
Logging In...