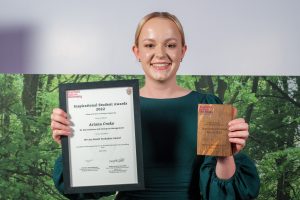 What they did​
They are one half of the founding members of Crags Radio a community Radio Station; they have been on the manging board as ‘Business and Marketing Manager’ since inception of the idea in 2019.  Crags Radio also works in multi-media and is based in Creswell, Worksop.  They opened Crags in January 2020 just ahead of the pandemic and we have recently celebrated their first birthday.

Crags Radio is an online radio station and can  be heard from around the world. Their top 5 countries are the UK, USA, Germany, India, and Argentina.  Listeners can also be found in Canada, Brazil, Russia and Spain.  ​

They are a not for profit organisation and raise money through sponsorships, advertising, events and donations. ​

Over the last 2 main events they have raised around £400 with the Christmas Lights Event, and at a recent coffee morning they raised £102.15.  This year they are also launching the Unsigned Music Awards to celebrate and support unsigned artists locally, they also have a nationwide and worldwide category planned. The aim is next year to launch the event as a ticket generated event with live performances and raise money for the station and local charities.”

What was the Impact?​
“The aim of Crags Radio station is to encourage local residents and businesses to be involved with the process of making the community stronger, connected and supportive.

They want people in the community to use the space for clubs, training, meetings and for the station to become a hub for the community. All the presenters are volunteers that want to become part of a team, and support the community in which they live and/or work.  With this in mind the student and their managing team organise events within the community to support local charities. For example; each month there will be a coffee morning, this month was in aid of Bluebell Wood Children’s Hospice raising £102.15. ​

They also are expanding and holding business networking events, where the aim is to support a different charity each quarter. They hold awards for example in 2020 we held their first ‘Community Stars Awards’ which gave recognition to people in the community that has made a large impact such as Best Keyworker, Best Local Business, Charity of the Year and Community Project Award along with some others. They are also running this award programme again this year.” ​

How it inspired others​
“They have developed strong investment links to support Crags station during its initial phases and to enable a growth plan to become a committed member of the community.  They have also developed the support for unsigned artists and created #TazzaTrack supporting artists globally with showcasing their music as a co presenter on The Saturday Hours.​

They allow people to design and run their own show.  There is always something for everyone all day and night for both listeners and volunteers being either educational or entertaining engaging all residents. With no other station targeting North Nottinghamshire. Some volunteers have been inspired to get involved with our charity events and even put themselves forward for the managing team working alongside the student and others.”