Awarded for Outstanding impact and/or contribution as an Apprentice 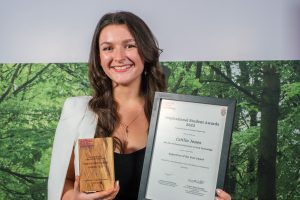 What they did​
They came on a visit from their local school (Sheffield All Saints) and made it quite clear that they wanted to follow Matty Desforges (who also came from All Saints) onto a degree apprenticeship role. After that visit, they kept in touch and some opportunities were passed to them. They applied for the role that was advertised with the Co-op and was apparently brilliant! They had a lot of applications but this student clearly stood out. They have simply gone from strength to strength and has flourished not only in their role as a food technologist with the Co-op but as an apprentice and a peer on the course. Played a fundamental role in developing allergen awareness training packs and a virtual allergen training course for Co-op academy students and the wider store operation in response to the recent introduction of Natasha’s [allergen] law.​

The campaign was supported by Steve Murrells, Co-op CEO, had national media coverage and involved the printing of allergen awareness training packs for every student across the Co-op academies. ​

In addition to the role the nominee is a great ambassador for the apprenticeship scheme. Having partaken in multiple apprenticeship campaign videos for the likes of Sheffield Hallam University and the British Retail Consortium (BRC).  As well as speaking to Co-op academy students about the apprenticeship route and advocating for the Co-op at the All-party parliamentary conference during the Governments annual conference in 2021.​

What was the Impact?​
“Dedication to the project’s success ensured effective and informative training for the students. The final training packs were well received by the academies and the students alike. ​

Complimentary feedback was received from the Head of Technical, the Head of Co-op Academes as well as Anaphylaxis UK who had aided the research element of the project. ​

The recent video that they did with BRC during National Apprenticeship Week was simply inspirational for all that understand the role of an apprentice in a retailer. Not only have they got to grips with the role but in the opinion of their employer is achieving far more after 1 year at aged 19 than some graduates are capable of when they start work. They embrace the work based learning of the apprenticeship and additionally, are happy to share this with their peers and potential students – a real role model for apprenticeships. Please do watch the video to be inspired! Dedication to the project’s success ensured effective and informative training for the students.”

How it inspired others​
“48,000 Co-op colleagues have access to the Allergen training compiled.  This has boosted store colleague allergen knowledge, increased Co-op diligence and fundamentally gives reassurance to customers that the Co-op instore made products are allergenically safe.​

The Co-op took on an apprenticeship as a trial – this student has exceeded expectations all round within and externally to the Co-op. They have taken on a category (or two) within the Co-op and is a fully fledged technologist working on real products, with real suppliers and customers. their work on sharing the benefits of the apprenticeship has been outstanding – internally at the Co-op, with BRC and even going back to school to work with current students. They are going to be a hard act for the Co-op to replicate when they take on their next apprentice!” 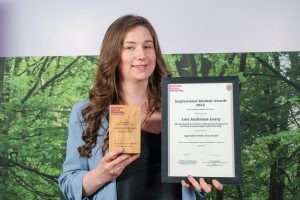 What they did:​
“Having transferred from cardio to respiratory after year one this nominee has shone and grown throughout their time with us.  They have shown true passion for the speciality and this is reflected in time spent with patients/staff/quality of clinic work produced and the pebblepad portfolio. Their levels of work ethic and attention to detail in-stills a shining example to other apprentices and trainees visiting the department on a daily basis.  This person will undoubtedly develop in to an excellent qualified physiologist the department and team at SHU can be immensely proud of.  They uphold a constant level of practice without fault on a daily basis.”​

What was the impact:​
“We were fortunate to employ this person on a long term basis purely based on their weekly placements from cardiology in first year.  They bring an excellent working attitude everyday  whilst continuing what was a swift learning curve after transferring to respiratory.  Their personality fits in perfectly with an already established team and will always offer above and beyond to help individuals and the service as a whole.  This person is a massive influence on the workplace in only a positive way.  As manager on the unit I have no quarms they will excel in the field of respiratory physiology.”​

How it inspired others:​
“As WBS it can sometimes be a slog to motivate trainees to fulfil certain aspects of the pebblepad, in this persons case it is the contrary.  Their will, interest and commitment inspires me to get the best out of the nominee.  I’d like to hope her SHU assessor Tracey is in agreement as they make our experience pleasurably and excited they are the ‘new generation’  As a result their impact inspires trainees and visitors around.  Exuding such a positive attitude and good work ethic only influences the team for the better.”​ 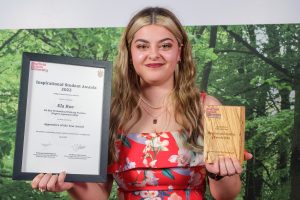 What they did:​
“This apprentice is a full-time police officer studying on the Police Constable Degree Apprenticeship (PCDA) who joined the first cohort of the PCDA in September 2020. I met this student on their very first day. One of the youngest, this student was very shy and nervous as to whether they would be able to cope with the academic study whilst working full time as a police officer. This student has ADHD and a learning contract for dyslexia and only completed the first year of their A levels before dropping out after being told by teachers they were not academic enough. This student’s ‘dream’ was to be a police officer.​

They have flourished on the PCDA, achieving a 2:1 at the end of level 4 and already have a project in mind for their End Point Assessment.​

Operationally this student has exceeded expectations, gaining independent patrol status early and being commended by South Yorkshire Police (SYP) Staff. They have dealt with some very harrowing incidents; a sudden infant death, death by suicide, been badly assaulted when arresting a suspect to name but a few. They have shown resilience and professionalism dealing with these incidents alongside their academic study.”​

What was the impact:​
“This student’s positive outlook for the PCDA has impacted on other students, and specifically me as course leader. They have been an excellent support, providing feedback to ensure the PCDA is the best it can be. The student has spoken candidly about their nervousness undertaking academic study and working operationally as a police officer to potential new recruits at several different events including the PCDA summer school. This has assisted both SHU and SYP in widening participation to potential students who would have otherwise thought they are not worthy of undertaking such a difficult course. The implementation of the PCDA to SYP has meant a change in culture for their staff. This has not always been received positively by operational police officers who did not join through the apprenticeship. This student’s positive outlook, hard work and determination has had an impact on the change in mindsets within an operational setting. I have been contacted by Sergeants and Inspectors who have told me what a positive impact this student has had at their District. This student was one of 60 who were disrupted by Covid but this student adapted to online learning and encouraged their peers to be more positive.”​

How it inspired others:​
“This student is an inspiration for not only the PCDA but for all apprenticeships. They speak positively about their experience with Sheffield Hallam University and the support they have received. At a recent celebration event they provided a video talking candidly about the PCDA and a senior officer commented on how they were such an inspiration for potential students. Speaking openly about their learning disability and the support they have received has given potential applicants the confidence to apply for the programme who would have otherwise thought their own learning disability would be a hindrance. Nationally the PCDA is coming under a lot of criticism by Chief Constables and staff who do not think it is the right way to train police officers, this student is why the PCDA should be the route into policing. Their growth both personally and professionally is inspiring, and this demonstrates how an apprenticeship programme can really benefit individuals. This student has gone above and beyond to develop themselves and make the most out of a challenging yet rewarding apprenticeship. They have been a real inspiration to the Course Leader and other teaching staff to ensure the PCDA is an excellent and inclusive programme.”