Debate refers to a discussion in which two or more people advocate opposing positions on a topic or question in an attempt to make an audience (or the other advocates) accept their position. Most people are familiar with participating in informal debates, such as trying to persuade friends why a particular film, song, book, artist, etc. is better than another; however, as these often devolve into circular arguments, personal ‘attacks’, tangents, etc., formal debates often have rules to ensure that the discussion remains on the original topic. Debate has long been an integral part of politics, particularly parliamentary politics, but has become increasingly high-profile over the past few years with televised debates on issues such as Scottish independence and continued membership of the European Union – though, as is frequently seen on the BBC’s Question Time debate programme, political debate is not immune to the potential pitfalls of informal debate.

A reasoned debate allows students to explore and gain understanding of alternative viewpoints and, for the participants, develops communication, critical thinking and argumentation skills. The approach is often used in disciplines where practitioners are required to present and defend particular positions against other parties, such as Law, Politics, and Social Work. However, while the use of debate as a teaching approach is clear for those subjects where it is a relatively common part of the working environment, the skills that it helps develop are widely applicable and so many other disciplines could also benefit from requiring students to develop debating experience. For example, students in design-based subjects, such as engineering, graphic or product design, could use the skills they have learned through debating to give well-qualified justifications for making particular design choices in response to a project brief. 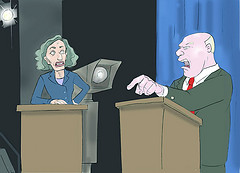 Debate in its simplest form requires a question, statement or idea with at least two opposing positions, each of which is defended against the others by an advocate, often with an impartial moderator ensuring that the discussion remains focused. This simplicity means that the approach can be used in a wide variety of settings and disciplines. While the advocates should be knowledgeable about the position they are defending, it is not necessary for that position to be their own – in fact, making students research and defend a position they do not personally hold is a powerful learning opportunity in itself. The approach can be used with individuals or groups as the advocate(s) for each position, with the advantage of turning the debate into a group activity being that more students can be involved and a more comprehensive argument can be developed. If using group debates, it is necessary to allow time for participants to confer between their opponent’s remarks and delivering their own rebuttal.

Debates can be competitive, where participants aim to create a consensus for their position among the audience, or non-competitive, where the discussion of the merits of different positions is most important. It is useful for all debates, but essential for competitive ones, to have some way of measuring the audience’s overall view after the debate in order to see which argument was the most persuasive. It is also important that the moderator ensures that the discussion does not become personal and that the participants remain focused and composed, and a set of ground rules is useful to reduce the possibility and impact of any problems.

While some disciplines lend themselves particularly well to debates, either through the nature of the subject itself or through current and past controversies, there are ways to start a debate in any discipline. For example, photography students could debate a statement such as “digital manipulation of images has no place in artistic endeavours and should be banned”; software engineering students might debate “object-oriented programming is a failed paradigm and should be abandoned”; or nursing students could have “with limited resources and increasing demand on time, nurses should prioritise the least sick patients over those who need more care”. It is unlikely that anyone in these disciplines would (completely) agree with these statements, but making students defend and attack the statements encourages them to explore their own views and understand the reasons why others could hold opposing views.

An important point to remember with debating is that the medium can often be more influential than the message – that is, a charismatic or slick advocate can be extremely persuasive regardless of the quality of their argument (the amount of money spent on ‘media training’ for politicians is a clear indication of this). Therefore, it is essential that the students are aware of this phenomenon and so can learn to either use it to their advantage or look beyond it.

Possible Technologies to Support the Approach

A virtual classroom tool, such as Blackboard Collaborate, or a videoconferencing tool, such as Skype, would allow participants to take part in the debate from anywhere in the world – in much the same way as a many of the debates on news programmes such as Newsnight. Using these tools also allows debates to include outside parties, a series of debates on the criminal justice system, for example, could have students debating with lawyers, convicted criminals and victims of crime, and allow each to present their view, perhaps even anonymously.

Tools such as online discussion boards and forums can provide the same opportunity to include participants from a variety of locations but also allow the debate to take place over an extended period of time. This would let the participants research their responses to their opponents and take their time in crafting their own statements. An additional advantage of using these tools it that a record is automatically created and can be referred to both during and after the debate – though it is important to make sure that participants are not able to change their contributions after a response has been posted. As this is a written rather than spoken medium, the students are able to develop some different skills than they would in a traditional debate; in particular, this method encourages the development of critical writing. 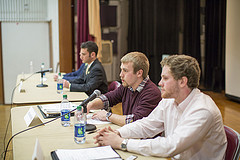 Other tools can also be used to enhance the debate. For example, the audience could use an Electronic Voting System (EVS) throughout the debate to gauge how persuasive each participant’s argument has been. By having the audience use the EVS to record their personal position before and after the debate it would be possible to gather useful data on how different demographics respond to particular arguments and techniques when discussing the topic. Recording the debate, either as audio or video, while not contributing to the learning activity itself, would allow the activity to be reviewed and analysed in greater detail than is possible in a live debate.

If you are interested in trying out Debate there are a few practical questions that you should answer:

Having thought about these questions, you should have worked out whether Debate is an approach that makes sense in your context and have some ideas about how to introduce it. If you are still unsure, you could try a small exercise in a single lecture or seminar and see how the students respond.

The following links provide further information on some activities and assessment outputs that can work well with Debate, especially for students who are part-time or not campus-based:

One thought on “Debate: An Approach to Teaching and Learning”