The following set of FAQs have been generated to support you around the transition from Crocodoc to Box View for inline grading in Blackboard.

When will Blackboard be unavailable?

The update and transition to the new marking tool will take place between 5pm on Friday, 1 December and 5pm on Saturday, 2 December. Blackboard is predicted to be unavailable most of this time, though the Bb admin team will endeavour to get it back up as early as possible, and it could be available again earlier on Saturday.

Why are we making this change?

The company which owns Crocodoc is called Box. It announced that Crocodoc will be no longer available as a product from 15 January 2018, and that users should change over to a new product called Box View instead. Blackboard has provided an update for all of its versions which allow institutions to switch from using Crocodoc to Box View. This update was only available for us at the start of November so we were unable to make the transition before the academic year began.

If we do not run the update by 15 January 2018, we will lose access to all of the existing feedback in Crododoc and lose the ability to add new feedback using inline marking. As this is unacceptable, we are trying to implement the update at a time when it will cause the least issues for staff. For this reason, 1 December was chosen as the best time to do the update and transition after looking at due dates and feedback return dates.

What will the interface look like for the new Box View tool?

We will be providing more information about the interface as it is released to us, though we have a screenshot (below) or screencast which shows what the commenting interface looks like. 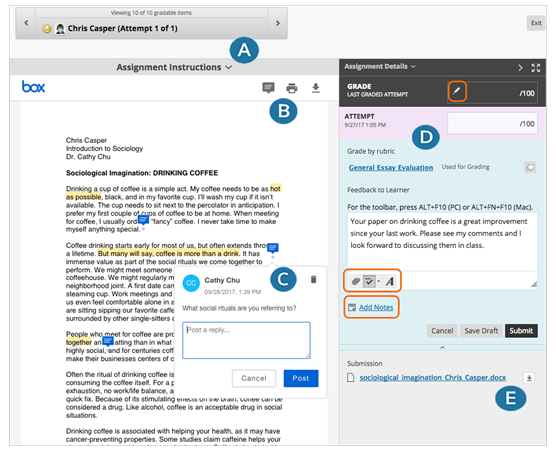 What differences are there between Crocodoc and Box View in terms of functionality?

Box View displays comments through an icon overlaid with the text, while Crocodoc displayed comments on the right side of the screen. Box View does not allow a free drawing option like Crocodoc had. Box View allows staff to select text, then icons will appear which allows you to either highlight or highlight and leave a comment. Box View does not allow staff to edit comments they have added, though they can be deleted and re-added where mistakes are made.

Box View does not allow users to download or print files with the comments visible, something Crocodoc did allow. We are working with Blackboard to lobby for additional improvements to the Box View service, such as this functionality.

What happens if I start adding comments in Crocodoc but do not finish marking the student work before the update 1 December?

I have been marking in Crocodoc. Will the feedback I have created be lost after the update?

Will there be any changes for students?

There will not be any changes in the way students submit their work in Blackboard. However the appearance of the inline feedback comments will be different in Crocodoc and Box View. Students will be unable to download their work with all of the annotations included, for any annotations made in Box View. Students will need to click on a comment in order to see the contents of it, rather than it being displayed on the side of the page as in Crocodoc.

How will the downtime and the changes be communicated to students?

Messages have been put up in multiple places in shuspace warning students of the downtime and that they should download any files they need during the downtime. We are hoping the downtime will be short enough to have a minimal effect on students.

Assessment4Students and relevant shuspace articles will be updated in the week after the change is completed to reflect the new look and functionality of the inline marking tools. Some video resources might take longer to complete. Anything you can do to communicate the changes to your students as well would be beneficial as well, as we know that students value messages from their tutors over all other university sources.

Does Box View work on a Mac?

Box View does work on Macs, though in some versions of the OS it may not work with Safari. We recommend using Chrome or Firefox as your browser on a Mac, particularly if you are not seeing the inline marking tools or feedback using Safari. Students may also have problems viewing their feedback using a Mac and Safari browser. However Safari browser appears to work when using an iPad or iPhone.

Will the Grader App continue to work when using Box?

Currently the Grader App does not display the student papers nor allow annotations when using Box. The features which allow input of marks, audio feedback, text feedback and video feedback all work however, and could be used side-by-side with another screen if this is desired.

We have reported this to Blackboard as a bug. There is also a new Instructor app available which should have marking features added to it during spring 2018, which will replace the Grader app.

Do I need to change any settings for the Assignments in my Blackboard site?

No, you do not need to make any changes to your Assignments or Grade Centre.

Will there be any changes to Feedback Rubrics?

No, there will not be any changes to the Feedback Rubric functionality in Blackboard.

Will there be any changes to the ways I can upload feedback files to Blackboard?

No, there will not be any changes to the functionality for uploading individual or multiple feedback files to Blackboard.

Will there be any changes to Grade Centre?

The only changes to Grade Centre will be the new inline marking tool – the appearance and functionality of all other screens will remain the same.