You have an odd perspective from the stage: the hall is darkened, so that even though you know all three tiers of Sheffield’s vast City Hall are packed with proud parents, children and partners, you feel curiously isolated. I’ve never appeared on stage in a vast, packed theatre – my occasional forays into student theatre were certainly not to packed houses – but I would imagine that it’s pretty much the same: you need to focus on the stage, where the action is taking place. And on the stage, over the two full weeks of graduation, something like seven thousand new Hallam graduates will receive their degrees.

They come across the stage one at a time. Almost all are slightly nervous, and the nervousness manifests itself in different ways. Some move across the stage a little too fast, others without quite making eye contact, others a little cautiously. But that’s a minority. For most, once they start moving, as the orator calls their name, nervousness disappears. They relax into a broad smile and almost glide across the stage with pride – as they should. 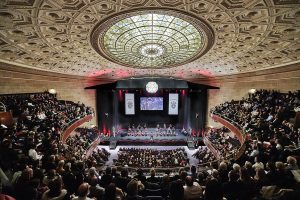 Over the graduation fortnight, something like 7,000 new Hallam graduates will receive their degrees.

Institutions, of course, thrive on rituals: apparently stable ways of marking the annual calendar and rites of passage. Our graduation rituals take place in the Autumn, a few months after most of our academic programmes end. They also, therefore, draw back together our graduates: they are a first reunion as much as a full stop on undergraduate or graduate study. The slightly mannered behaviours, the colourful academic dress, the slightly too bright lights are all ways of heightening the ritual, and it is to be relished and enjoyed. It appears unchanging – but of course it’s not quite so. There are endless minor adaptations, worked through by the graduation teams. This year, our resident string quartet has new processional and recessional music, the latter described to me as a ‘bit skippy’; and so it is. This year also marks the debut for our new Chancellor, Baroness Helena Kennedy QC, who has already begun to lead the ceremonies with her own style – warm, sympathetic and engaging. From my on-stage vantage point I see the brief spark of engagement as students cross the stage and receive her congratulations.

For a number of reasons, as Vice-Chancellor, I find myself taking the lead role in rather more ceremonies this year than I have done in the past two years. By the end of the second week, I will have been present at, I think, fifteen of the twenty-two ceremonies. Only Keith Dayman, our experienced mace bearer, brought back from retirement for this year’s ceremonies, will have done more. That gives me a distinctive perspective on the ceremonies. And a responsibility: I may be about to shake hands with my two thousand, four hundred and eighty-fifth graduate, but for them, it is a unique moment: every handshake needs to be fresh, every smile broad. I always try to use the graduate’s given name in a brief word of congratulations, and to strike up the briefest of conversations with a few – questions about their degree, their interests, their trajectory. I’ll always try to ask research degree graduates to tell me the essence of their research – though, on reflection, it’s an unfair question, to be asked to boil your thesis down to a single sentence in front of a full house.

I think we do graduations well at Sheffield Hallam: the right degree of ceremony and solemnity. One of my daughters graduated from a university which had decided to undercut the solemnity with too much humour – a bad mistake, I thought, and I’ve tried to learn from it. Better to be just a little bit too pompous on these occasions. I’ve always tried to think hard about the ceremony from the point of view of the audience. It’s for them that we do it. It’s important for them, and we have to do it right, allowing each student amongst the seven thousand to feel pride and to enjoy their moment.