The guns fell silent at the eleventh hour of the eleventh day of the eleventh month. The time and date of the 1918 Armistice acquired significance quickly. The first Remembrance Day was just two years later.  On 8 November 1920, Brigadier General Louis Wyatt had arrived at a makeshift chapel at St Pol in northern France.  The bodies of four unidentified servicemen, exhumed from military cemeteries and each covered in a Union Jack, were presented to him. He chose one to be laid in a tomb for an unknown warrior in Westminster Abbey. The coffin was taken across the Channel and arrived at Dover on the morning of Thursday 11 November 1920. There it was placed on a carriage, drawn by black horses.  It passed hushed crowds; many of them, it is said, weeping.  It was borne into the Abbey at 11a.m.  More than a million people filed into the Abbey to pay respect. The military chaplain whose idea it had been explained that the entombment of the unknown warrior could perhaps “ease the pain of father, mother, brother, sister, sweetheart, wife and friend”.  Remembrance made universal suffering personal.

So many of our ideas of remembrance were settled on that grey November morning in 1920: the military precision of the occasion, the grave formality, the hushed crowds, the emphasis on the massive significance of what—on the back of my own grandfather’s demobilisation Victory medal—was called the “Great War for Civilisation”.  And now we mark one hundred years since the end of the War. It seems extraordinarily remote. That prompts the question about how we should engage the generations to come in remembrance.  The grainy black and white images on stuttering film reels seem to present a world utterly different from our own.  But perhaps not so.  In the past few weeks, Peter Jackson, the director of the Lord of the Rings trilogy has released his painstaking work on archive film from the Imperial War Museum.  He has used state-of-the-art digital technology to restore those awkward, juddering monochrome films.  He has coloured them, put them into 3D, slightly slowed the frames.  He has used lip-readers to dub in what the men were saying. Suddenly the past leaps into the present. The images are as immediate as modern reportage.  You are reminded that these were real people, with hopes and dreams, laughter and tears, their lives utterly changed by war.  Sheffield Hallam’s 1918 Project, embracing outreach work with schools, offered pupils from three primary schools the opportunity to work with our Creative Writing staff to develop their own response to the war, their stories displayed in Sheffield’s Winter Gardens. Remembrance recalls. 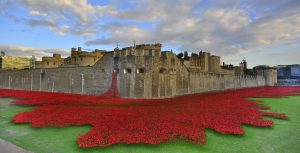 Poppies at the Tower of London.

The First World War ushered in the modern world.  We are recalling not just death and injury on a vast scale, but also the birth of our own time.  The technologies of modern warfare were developed in the years between 1914 and 1918. The demands of a war economy which saw women deployed in factories signalled the start of the recognisably contemporary way we think about gender equality.  The armies fighting in that European war were global multi-cultural armies, recruited from far-flung empires.  Political ideologies were shaped by the War: nationalism, socialism and globalism all assumed recognisable form.  The flawed political settlements at the end of the War created modern nation states and drew lines on maps which have dogged the world ever since.  As part of our 1918 Project, the University is running a series of post-16 lectures which explore the impact of the War on suffrage, on Eastern Europe, on global politics and on social class.  Remembrance reminds.

But remembrance is complex. David Rieff had been a war correspondent in Bosnia.  His book In Praise of Forgettingcatalogues the ways in which nations are held prisoners by the act of remembering, because, as he says “in affirming that remembrance is humanly necessary, we must not pretend that it is ever completely innocent”.  That horse-drawn carriage moving slowly from Dover to Westminster on this day in 1920 was not simply allowing for an outpouring of grief, but was shaping the idea of remembrance.   It was locking in the way the War should be remembered, defining a tone which has barely changed since.  Remembrance locks in attitudes, a reminder of ancient enmities as much as personal sacrifice. Perhaps too many nations have been shackled by these reminders. The “war to end all wars” was anything but.  The hundred years since have been drenched in blood. Remembrance confines.

As time goes on, remembrance becomes more weighted with ambiguity. Near the end of his book, Rieff quotes the Polish poet Wisława Szymborska. Her country was repeatedly riven by twentieth century conflict.  In her poem The End and the Beginning, she writes “Those who knew/what was going on here/must make way/for those who know little”.  Of course, as the last lines of Rieff’s book concede, forgetting is neither possible nor desirable; understanding is an obligation.  As the twentieth century philosopher George Santayana put it, “those who cannot remember the past are condemned to repeat it”. Time moves on. Remembrance changes.

Our 1918 Project encompasses remembrance and change. It includes activity exploring the transformation of Collegiate Hall from a teacher training college to the ‘Third Northern General base Hospital’, treating some 70,000 wounded soldiers and then transforming again, back into an academic building. One hundred years after the end of the First World War, we call to mind “the pity of war/the pity war distilled”. The lines are, of course, those of Wilfred Owen, the great poet of war, who was himself killed just a week before the Armistice. Perhaps we also have to consider something just as difficult: making our own sense of the relationship between the past, the present and the future.