Clausewitz famously maintained that war was the continuation of politics by other means. If the soccer World Cup had been around in the early nineteenth century, he would have worked football somewhere into his dictum. Almost every World Cup game is more than a sporting encounter: issues of national identity verging into national stereotypes, patriotic pride, history and geo-politics also come into play. It was always thus: England defeated Germany in the 1966 World Cup final just twenty years after the end of the Second World War, and the Argentinian striker Diego Maradona scored his now notorious ‘hand of god’ goal against England in the 1986 World Cup quarter finals just four years after the Falklands War. Europe versus South America. Northern Europe against Southern Europe. It was Bill Shankly, the great Liverpool manager, who said ‘football is not a matter of life and death – it’s far more important than that’. It’s a good thing that in the twenty-first century, young men tough it out on the football field rather than the battlefield, but old rivalries – enmities even – die hard. Now the relative success of the English team in Russia has produced an outpouring of national enthusiasm. St George’s flags festoon cars, vans and houses wherever one looks and, of course, the tabloid press has gone overboard. 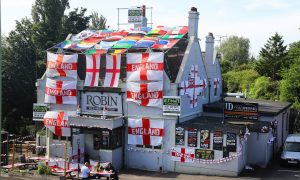 Sheffield played a critical part in the development of the modern game of soccer. The first association football club, Sheffield FC, was established in 1857, with Hallam FC the second in 1860 – I’ve always wondered who Sheffield FC played against for the first three years. The rules of the modern game were codified here. There used to be a saying in cricket that when Yorkshire cricket was strong, English cricket was strong, but the same might be true of soccer too: Lee Elliot Major of the Sutton Trust has done an analysis suggesting that Gareth Southgate’s England 2018 team is more Yorkshire – more northern – than any national team since Alf Ramsey’s victorious 1966 team. Indeed, Southgate himself lives in Yorkshire. And Sheffield Hallam is now one of the UK’s strongest sports universities across teaching, research and consultancy. The University has an outstanding record in educating elite athletes, in sports business analysis, understanding the economic impact of sport and in sports engineering research, exploring the biomechanics of sports.

In football, wrote Jean-Paul Sartre, ‘everything is complicated by the presence of the opposite team’. In World Cup watching, everything is complicated by the existence of everyday life. With appallingly bad planning, I have a commitment to speak at a teaching excellence conference in Glasgow on Thursday morning. I am in London the day before so this entails a flight from Heathrow which takes off just as the teams kick off in Moscow, and means that I disembark in Scotland. It does mean that in years to come, I will be able to say either ‘Oh yes, that semi-final – I was floating in the air’ or ‘oh yes, that semi-final – I came down to earth with a bump’. But all this lively national, and civic, enthusiasm is something to be part of and my real recollection will be of missing the game.

3 thoughts on “A beautiful game?”