To be honest, Friday evenings are not normally the most energizing time of the week. At the end of a long and tiring week at work, they are normally a time to flop out, hoping there’s enough in the fridge to make something to eat. So it was very good to have a different Friday evening last week, at the celebration which marked the culmination of the Catalyst Festival. Catalyst has been Sheffield Hallam’s distinctive contribution to Sheffield’s Year of Making: a festival which, as Professor Sally Wade explained on Friday evening, ‘celebrated how by working together we make a difference to our city, our environment and one another’s lives’. The Catalyst Festival attracted over a hundred proposals. It has funded twenty-two projects and commissions and supported a further twenty-one activities since its launch in 2016. If you visited City Campus at any point over summer 2016 you will have seen Gabriel Tang’s wonderful gridshell installation – itself a Catalyst project. 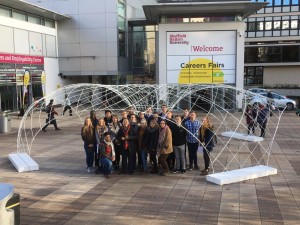 Staff and students with the Gridshell installation

The Catalyst Festival took place alongside the completion of the transformation of Sheffield’s old Head Post Office building in Fitzalan Square into the strikingly handsome new home for the Sheffield Institute of Arts, combining gallery, teaching and workshop space across the full range of the arts. The first exhibition in the new SIA gallery was a Catalyst project: the Post Office Faces exhibition, bringing together retired post office workers in an art and oral history project to talk about their experiences of working in the building. This commitment to art, place and engagement with Sheffield’s diverse communities was a hallmark of Catalyst. By the end of 2016, 11,000 people had attended Catalyst events, seventeen schools had been actively engaged with the Festival, and the media coverage across a range of platforms has reached almost a million and a half people.

It’s perhaps always a bit unfair to pull out specific pieces of work but as a visitor on Friday evening I was powerfully struck by two, both completed as part of the ‘All Our Brains’ project, supported by Catalyst, Heeley City Farm and the Sheffield Dementia Action Alliance. Suspended in a cuboid frame was a model of a brain entirely constructed from knotted cotton thread. This only superficially describes the power of the piece: the ‘brain’ of course, was the space created by the gaps at the centre of the knots. It was at once clear but desperately fragile, and the sense of the brain as the space at the centre was poignant.

Perhaps even more striking for me was the Dementia Bookcase, constructed by Siana Glen, a Hallam occupational therapy student, not least because of the opportunity to talk to Siana about her work. Inside an aged bookcase, six shelves of books. The lowest shelves brought together the sorts of books we might expect to see on an elderly person’s bookshelves. And as your eye travelled up the bookcase so the books began to disintegrate; some were glued to their shelves; some were defaced by repeated scribblings; until at the top the books were no more than shreds of paper. Siana had drawn on the experience of her grandfather’s dementia, sourcing the books from endless hunting around second-hand bookshops and applying her art training to create the piece.  It was – and became more so the more you looked at it – a moving and engaging metaphor for the progress of dementia.

The rescue, restoration and transformation of the Post Office alongside Catalyst was the focus for another study, with a series of striking photographs by India Hobson chronicling the project. Hallam’s Roger Bateman said on Friday evening that the photographs had the character of still lifes, and he is right. They were displayed late last year on huge boards, and on Friday evening projected onto a vast screen, but they are also collected in a publication called Autopsy: the Head Post Office, Sheffield, and they have a slightly different impact in each medium, giving perspectives on disrepair, rescue and restoration.

One of my most absorbing reads last year was Peter Korn’s book, Why we make things and why it matters – a beautifully produced and engaging book about his own development as a carpenter. He talks in one chapter about the way in which craft engages ‘heart, head and hand’. That is what Catalyst projects have done, not just for their creators and producers but for so many people. This has been the University, making things, and making them at the heart of the city, engaging so many people.