Those who work closely with me know of my tendency to draw on The West Wing as a frequent source of quotations and parallels. A recent survey of the best TV drama series rated it eleventh – above The Wire but (wrongly in my view) below Mad Men. If you are not familiar with it, over the course of seven series, The West Wing traces the interlocking lives of White House staffers in an impossibly idealistic presidential administration, by turns cynically political, cloyingly sentimental and acerbically witty. In one episode, The Stormy Present, the presidential character, played by Martin Sheen, travels to the funeral of a former president in the company of other veteran politicians. As they travel, they reflect on the crises and challenges of their own careers, and how each one seemed uniquely challenging, more difficult and more threatening than any their predecessors had faced. The lesson of The Stormy Present is just that: the present is always more challenging than the past but, to quote one of the soaring rhetorical speeches of the fictional president in another episode, “every time we think we have measured our capacity to meet a challenge, we look up and we’re reminded that that capacity may well be limitless”. 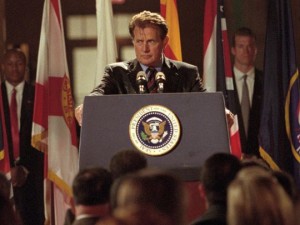 The New Year begins, assuredly, in the stormy present. 2016 may have been full of unpredictable shocks, but looking ahead to 2017 we can already predict a challenging year. By the middle of the year we will have a new Higher Education and Research Act. Currently before the House of Lords, the Act will fundamentally re-shape the regulatory and operating framework for universities, introducing new competitors and sharpening the operation of the market. By the Spring, the government have indicated that they will have activated Article 50 of the Lisbon Treaty, initiating the United Kingdom’s withdrawal from the European Union. In two weeks’ time, the United States will inaugurate Donald Trump, the least West Wing-like president imaginable. If this isn’t enough, it’s set against the continuing demographic decline in the number of eighteen year olds in the United Kingdom, posing ever tougher challenges for UK undergraduate recruitment, and an increasingly turbulent picture for overseas recruitment as visa regimes tighten and as higher education systems in other parts of the world mature. And all that is enacted against the continuing technological revolution, increasingly impacting on teaching and learning, and against changing modes of knowledge creation across the world’s universities and research institutes. Certainly, a stormy present.

This is the beginning of my second year at Sheffield Hallam – it really does seem barely a few moments since I arrived last year. My first year was energising and stimulating in equal measure, and I think we are now well-placed to make significant and rapid progress. One of my diversions over the Christmas break has been the opportunity to read responses from directorates and faculties to the refreshed university strategy, charting a long-term course for Hallam’s leadership in shaping lives, creating knowledge, leading locally and engaging globally. We begin the New Year with a substantially reshaped and enhanced University Leadership Team, which will produce wider change in our governance and accountability structures – we need to be bold about the changes we need to be more responsive, entrepeneurial and effective.

Over the next month, the University Leadership Team will work through the strategy refresh responses and draw them into a coherent package for change across the University. We will be looking for the Board of Governors to sign off the new strategy at its meeting in early February – and then the hard work begins. In big organisations, doing strategic analysis is not too difficult; developing strategic plans takes imagination and good listening but is still reasonable straightfoward. The really hard work is always to do with strategy implementation: keeping an eye on the longer-term direction whilst understanding and meeting short-term challenges in ways which do not divert attention from longer-term goals; setting, and resourcing, priorities with all the discipline and hard choices that implies; ensuring that strategic capacity exists and that communication is open; and aligning plans, resources, incentives and rewards. That’s the reality of concerted strategic development.

At the start of this second year, I’m enormously excited by the opportunities facing Sheffield Hallam, the capacity we have to meet challenges and the potential of the University to do what it needs to do – to move from being a good university to a genuinely great university for this city, this region and our students.