If you stand on the hill behind Sheffield rail station – near the memorial to the victims of the 1832 cholera epidemic – and look across the city, Sheffield Hallam University dominates the centre of the city. Without it, there would be a large hole in the city centre. Universities do this to their cities. I once got a taxi from Boston airport into Cambridge, Massachusetts. “That’s Harvard Business School,” said my taxi driver. Three blocks later “no, that’s still Harvard Business School” and four blocks after that, we were still driving past the business school. Cambridge, England, would be a dull fenland town if a group of scholars, fleeing Oxford after a legal row, hadn’t bowled up at a monastic house established by the Bishop of Ely.  And so on: universities shape the skyline and the cityscape. 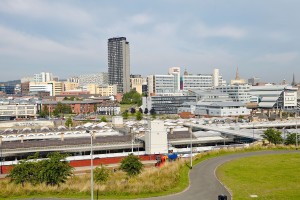 Sheffield, as viewed from the hill behind the railway station

Sheffield Hallam may be one of the largest universities in the UK, but its impact on the city and the region is immense.  Sheffield Hallam adds an annual £424m to the Sheffield City Region economy, generating £80m in extra annual tax receipts, the equivalent to £44 per person in the region, and supporting more than 9,000 local jobs in addition to the 4,500 people employed here. A decade of investment by Hallam has delivered state-of-the-art facilities, including the £27m new Heart of the Campus teaching and learning complex at Collegiate Campus, a £5m new home for the Materials and Engineering Research Institute, and a £3.5m cutting-edge teaching kitchen and hospitality facility.  Last year saw our £30m flagship Charles Street building at City Campus open, home to the Sheffield Institute of Education, and the restored former Head Post Office, providing a stunning creative space and a new cultural hub for the region.  This year, the University will complete the £10m refurbishment of the Sheaf and Eric Mensforth buildings, providing world-leading chemistry laboratories and a new atrium, which will be an impressive new entrance to the University, close to Sheffield Station.

The economic impact of the University is deeply entwined with the region.  49% of our students come from within 25 miles of Sheffield, predominantly from areas with traditionally low levels of educational attainment and skills. The University invests over £9m a year on widening access. In 2014/15, of our new, young (aged 21 or under on entry), full-time undergraduate UK students, 96% were from state schools or colleges, compared to the sector average of 90%, 41% were from low income backgrounds (National Statistics Socio-Economic Classification (NS-SEC) social classes 4-7) compared to the sector average of 33%, and 18% were from neighbourhoods with historically low numbers going on to university compared to the sector average of 11%. In just one of those areas – Wentworth and Dearne – the combined efforts of the University’s widening participation work and the work of schools and colleges has moved the higher education participation rate up from 15% in 2006 to almost 30% in 2016 – not far off the national average.  And the University draws students into the city from a hundred countries around the world – building the city economy but also making it a vibrant cultural environment.

The impact of the University does not stop there.  We run around 700 courses, and more than half of them offer integrated practice or work placement opportunities.  We work with over 3,525 businesses that help to provide 1,660 business placements for our students each year.  93% of our graduates are in employment within six months of graduation, with 67% of those in professional and managerial jobs. 600 new Hallam nurses start on the ward and 700 new Hallam teachers enter the classroom every year.

Ultimately, of course, universities are driven by ideas – ideas in the lecture, seminar and classroom, ideas in the research group, laboratory or startup. There was a fabulous blog from SHU’s Andy Alderson and Bristol’s Fabrizio Scarpa on The Conversation last Thursday, reporting that their team has recently developed a vibration-proof “metamaterial” which offers considerable potential – initially the prospect of making safer neonatal transfer vehicles and thus save the lives of some of the 16,000 babies transported from hospital to hospital each year. It is a brilliant example of the work Hallam does which makes a real impact, but there are countless others.  Through working in partnership with hundreds of regional businesses and using innovation and research to solve industrial problems (via Knowledge Transfer Partnerships), the University has generated £95m in increased profits for businesses and created 2,500 new jobs.  The new Advanced Wellbeing Research Centre (AWRC) on the Olympic Legacy Park will be the most advanced centre for physical activity in the world. It will create ‘innovations that help people move,’ tackling the key issues of physical inactivity and rising obesity.

Why write about all these things now?  Well, this is the launch of Universities UK’s University Impact campaign – raising the profile of universities locally and nationally.  Universities – and all they stand for – matter more than ever.   The commitment to creating opportunities through education, to generating usable solutions to the great challenges facing our society and to building cohesive societies based on respect for difference is needed more than ever.  It’s also the week in which the University Leadership Team will pull together the structure of the new strategy and identify our major change programmes to build the University’s impact still further, an impact gained by shaping lives, creating knowledge, leading locally and engaging globally. Making a difference is great; using that to make a greater difference is even better.