The bicycle transformed life in the nineteenth century. The idea that early bicycles were inefficient bone-shakers is for the birds: by the later nineteenth century, efficient bicycles with pneumatic tyres and ball bearings were common. One J.C. Skeffington toured southern England in 1858 for three weeks and, without avoiding the hills, averaged more than 26 miles a day. Hundred-mile bike rides at average speeds of eight miles an hour seem to have been almost routine. The first Tour de France, in 1903 – or one hundred and eleven years before the Tour discovered Sheffield Hallam – covered 1500 miles in six 24-hour stages, and was completed by 26 riders, exciting crowds and stimulating local entrepreneurship along the route (much as now). The winner, Maurice Garin, who had begun working life as a chimney sweep, was feted as a national hero, christened the ‘Little Chimney Sweep’ by the French media. The revolutionary nature of the bicycle lay in this: it was simultaneously a vehicle for elite athletes and the general population; it was a vehicle for leisure and competition; it was potentially available for all – before 1914 there was about one bicycle for every ten people in the UK and France; and it united physical effort and elegant technology.

Elite sport and population wellbeing are key research strengths for Sheffield Hallam University. The Centre for Sports Engineering Research (CSER), directed by Dr David James, has been developing technological innovations to support the performance of Team GB athletes at Olympic competitions since 2004.  In the last Olympic cycle (2012-2016), CSER delivered research projects to develop and implement technological innovations for ten different sports. These innovations directly supported Team GB athletes to win 42 medals at the Rio 2016 Olympic Games.  Amongst these developments, CSER developed the CrankCam which is used to collect and analyse cycling biomechanics data, a bespoke mobile app for monitoring gymnastics training and the NEMO data management system which is used to quantify race performance in swimming.  The range and impact of the work is remarkable. It’s an important reminder of the ways in which precise analytics, expertise underpinned by inventive technological development and close partnership with users can make impressive strides; it’s almost certain that CSER’s data means that the analysts and coaches know more about an athlete’s performance than the athlete themselves. 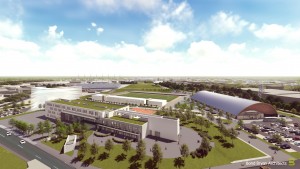 CSER’s work on sports engineering would be impressive enough on its own but, back to the lesson of the bicycle in the later nineteenth century, there is a significant challenge involved in taking those lessons – precise measurement, technological inventiveness, partnerships with users – from elite sport and working out what they can tell us about population health. At the time of what some people have called an epidemic in public health, the challenge is to get more people moving more often, in more ways. Sheffield Hallam’s Advanced Wellbeing Research Centre (AWRC), led by Professor Steve Haake, does just that. It is on the way to becoming the most advanced research and development centre for physical activity in the world, with a centre-piece new location on the Olympic Legacy Park. Working closely with Sheffield Teaching Hospitals NHS Foundation Trust, Sheffield City Council and a range of commercial partners, the AWRC will bring together expertise from academia, industry, and the medical profession from across the region and internationally, delivering innovations that help people move. The AWRC will generate benefits for the entire population, through increasing levels of physical activity for people with sedentary lifestyles, helping those who are already active to exercise more effectively, as well as improving the performance of elite and professional athletes. The AWRC will use Sheffield as a ‘living laboratory’ to encourage and enable people to be more active and adopt healthier lifestyles. It will meet the public health challenges caused by physical inactivity, resulting in improved quality of life and a reduction in healthcare costs.

I’ve written this blog about CSER and the AWRC for a number of reasons. It’s important to showcase innovations and developments across the University, and always a real pleasure to highlight the importance of what is done here.  But also because the ways in which CSER and the AWRC work go to the heart of what the University is about. This includes the use of the precise, focused expertise which only a university can bring to bear, targeted on real world challenges, thinking imaginatively about not just technology but the relationship between technology and the way it can be deployed, and doing all this in close collaboration with users, partners and clients. This is the way universities need to work, and it’s being done, here, at Sheffield Hallam.