On Friday morning, 11th November, the University will be holding a two-minute silence at 11 a.m. to mark Remembrance Day. I shall be leading a gathering in the entrance foyer of the Owen Building at City Campus, and Professor Karen Bryan will lead a parallel event in Heart of the Campus at Collegiate. I’m told that this is the first time, at least for a number of years, that we have formally marked 11th November. I hope that as many colleagues as possible will be able, subject to agreement from line managers, to join us.

My grandfather was born in 1876. He enlisted in the army as a young man, and served in India, being discharged as a sergeant after twelve years’ service in 1906. On October 5 1914, married and with a young child, he volunteered to re-enlist; he was already too old to have been conscripted when compulsory military service for the First World War was introduced. He served for four years on the Western Front.  He was wounded, and after the war his injury meant that he was able to work only as a timekeeper in a factory – undemanding and poorly remunerated employment. He died forty years later, a few months before I was born.

As a child, I knew him, therefore, only through two First World War medals which had been passed down and a handful of grainy black and white photographs, in which he always appeared wearing a heavy suit, tie and hat. It’s in the past few years that I have come to realize that there are any number of questions about his experiences to which I will never know the answers; questions that if he had been alive when I was a child I would have been too thoughtless to ask and, I think, he would have been too reticent to answer. 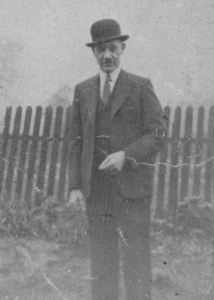 Sheffield played an important part in the First World War. At the outset, as in so many other towns and cities, young men volunteered in large numbers. More than 52,000 went from Sheffield to fight – equating to more than half of the men within Sheffield who were of the age to volunteer or be conscripted. Most of them had never left South Yorkshire before. More than 6,000 were killed, and many more were maimed and scarred for life, some dying years later from the effects of their injuries or from gas poisoning. They served in the first mechanised war, a war where techniques of killing on a mass industrial scale were employed for the first time.

And their city played a major role in making the war on that scale possible. Sheffield’s role in the manufacture of armaments and equipment was vital. The city’s steel industry was expanded and intensified as large-scale ‘national factories’ supplemented an economy characterised by small steel manufacturers. They changed the city forever. And the war was transformative in other ways too: as the young men of Sheffield enlisted or were conscripted, women were recruited to work in factory jobs which had previously been exclusively undertaken by men. The Women of Steel statue outside City Hall commemorates their contribution. Earlier this year, Weston Park museum hosted an exhibition – Echoes of the Great War – which used Peter Cattrell’s haunting photographs to explore the legacy of the war for Sheffield. Alongside the centenary of the First World War, there is a public lecture series run by academics in our Humanities Research Centre.

The guns fell silent at the end of the Great War at eleven o’clock on the eleventh day of the eleventh month of 1918. At the time, it was described as “the war to end all wars” because it was so destructive that the world’s politicians seemed determined to prevent such slaughter from ever happening again. That hope was, of course, dashed. Twenty years later, Europe, and then the world, went to war again, and the Second World War grew out of the flawed peace settlement at the end of the First. A century later, many of the conflicts which dominate the news on a daily basis can be traced back to attempts to reshape global affairs at the end of the First World War.

The two minutes of silence at 11 a.m. on Friday provide an opportunity to reflect on all these things and on others: on our family histories which are scarred by war and its aftermath; on the ways in which our cities and nations have been shaped by war; on the impacts of war on people and societies. What began soon after the 1918 Armistice as a national commemoration has come to frame something more universal: a reflection on war and conflict from the Somme to Aleppo.

I am sure that everyone who joins us on Friday will be thinking about something slightly different. That doesn’t matter: remembrance, like this blog, can be personal, institutional, civic, national, or global. When I was a teenager, looking at the pictures of my grandfather, it all seemed so remote. As I have aged, so it seems to have become more important that people assemble and remember what the poet Wilfred Owen, himself killed in France just a week before the cessation of hostilities, called “the pity of war”.

One thought on “On remembering and Remembrance”