Sheffield Hallam University is at the heart of its city and its region; I’ve written before that this shapes our purpose and mission in powerful ways. But it is also an international university. It connects the world to Sheffield and Sheffield to the world, both through the students it draws to Sheffield and through the partnerships it has developed across the world.

These blogs are normally written at home in Sheffield on a Sunday morning, but this one is different. It’s written not at home in Sheffield with the Peak District in the distance, but in a hotel room in Hong Kong. I’m in Hong Kong to engage our alumni, to work with partners including the British Council and to preside at graduation ceremonies for students who have completed Sheffield Hallam degrees through our, now, decade-old relationships with SCOPE and SHAPE. On Monday I shall set off for Shanghai to work with our students at the Sino-British College, before returning to Yorkshire on Tuesday evening.

This visit to Hong Kong coincided with the almost simultaneous arrival of Typhoon Haima – a ferocious tropical typhoon generating winds of 150 kilometres per hour. It was Hong Kong’s third typhoon in not much more than a month, at a time of year when typhoons do not typically occur: as we all know, our climate is changing, and changing quickly. On Thursday, the South China Morning Post website carried pictures of early flash flooding, turning streets into fast flowing rivers, stranding buses and lorries. On Friday, under steel grey skies the wind whipped up, bending trees almost to right angles as rain skittered down on normally crowded, but now deserted, streets. Hong Kong was in lock-down – a city that rarely sleeps closed down its public transport system and shops against Typhoon Haima. You normally struggle to see the sub-tropical island concealed beneath the frenetic landscape of glass-and-steel sky-scrapers, but extreme weather has the habit of stripping anywhere back to its elemental origins. A couple of traditional junks bobbed on their moorings in the swelling waters of Victoria Harbour on Friday, and because the grey cloud had swallowed the urban backdrop, you could have been in an older Hong Kong. I went out for a wind-swept and sodden walk late on Friday afternoon. It’s always interesting to think about how markets work:  virtually all the shops in Tsim Sha Tsui were closed, shuttered and sand-bagged, but there were still guys out offering me fake watches. 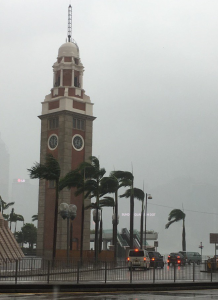 The University has a range of academic connections in Hong Kong, and too many to list here. The visit had several purposes: to reactivate our alumni network, to support recruitment activity, to work with local partners around the re-accreditation of our programmes, and – very importantly – to lead four graduation ceremonies for students graduating through our partnerships with SHAPE (the School for Higher and Professional Education) and SCOPE (the School of Continuing and Professional Education at City University Hong Kong). It’s a real privilege to be able to gather alumni together in the striking setting of the Hong Kong Maritime Museum, occupying a fabulous pier jutting into the harbour – following a highly successful London event for our real estate alumni just a couple of weeks ago. But the highlights were our graduation ceremonies, which took place after the typhoon had moved on and Hong Kong was experiencing the opaque light of a hot, humid day. The graduation ceremonies, for something like five hundred students in total, are a reminder of some obvious but easily forgotten things: that this is a university with global relevance, reach and influence, that there are students, several thousand miles away from Sheffield who have nonetheless chosen this university as the vehicle for their personal and professional development and that those students see Sheffield Hallam, and the world, through global lenses.

Almost all the most important issues we face are global in scope: the challenges of climate change, of responding to and shaping technology, of healthcare in ageing societies, of meeting both individual aspirations and collective needs. That’s why I have appointed Professor Roger Eccleston as Pro-Vice-Chancellor for Global Engagement, to energise further our thinking and provision as a globally connected university. The Sheffield Hallam graduations in Hong Kong are a powerful reminder that making good, long-term and sustainable connections across the world is one of the ways in which universities like ourselves can, and will, provide solutions.