Driving home from an evening out on Saturday, the radio was on, and we caught the end of a programme on Radio 4’s Listening Project.  If you don’t know the Listening Project it does pretty much what it says on the tin:  it eavesdrops on conversations between people about something important in their lives, and the entire archive is on the BBC website.  The clip we heard was a Chilean mother and her son who had fled the Pinochet regime in the 1970s.  They had settled in industrial Scotland, and whilst the mother retained her Spanish accent, her son’s Spanish was heavily overlaid by Scottish inflection.  They talked about their reception in what was then a largely monocultural Scottish industrial town. When they arrived there were Chilean flags out and the miners, some of whose fathers had gone off to fight fascism in the Spanish Civil War in the 1930s, made them welcome.

It was a momentarily uplifting end to a week of news which had been consistently grim for open internationalism.  In the Mediterranean a boat carrying refugees had been turned away from Italy and Malta before, after much sailing around, finding its way to Spain. EU governments in Hungary and Poland were amongst those making it clear that they did not see the need for any continent-wide response to the north African refugee crisis. The world looked aghast at the United States, where migrant children were being separated from their families, against a background of inflammatory rhetoric from their populist president.  In one account, children were barred from cuddling each other in the large holding cages in which they were being detained.  The inscription on the Statue of Liberty in New York harbour might read “give me your tired, your poor/Your huddled masses yearning to breathe free/The wretched refuse of your teeming shore”, but the federal government told a different story.  And if the American and Italian events caught the eye of the news, perhaps the most sobering statistic was that last year there were more refugees in the world than ever before: sixty-eight and a half million people displaced by political, economic and climate crises – more than the entire population of the United Kingdom. 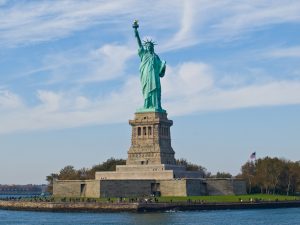 The Statue of Liberty

Injunctions to welcome strangers go well back into the Old Testament – “the alien who resides with you shall be to you as the citizen among you; you shall love the alien as yourself” (Leviticus 19:34) –  but in practice throughout history, those fleeing war, persecution and poverty have found the world more unwelcoming than professed commitments to charity and openness suggest. Our collective memory, which inclines us to celebrate acts of kindness and welcome, lets us down.  The salutary lesson in all this is perhaps the fate of the liner, the St. Louis.  In 1939, the St. Louis set off on a voyage from Germany with 900 Jewish refugees on board.  Thanks to immigration policies which, perhaps like Trump’s now, reflected domestic political realities, rather than humanitarian concerns, the ship was denied entry first to Cuba, then the United States and then Canada. Denied refuge in the new world, the St. Louis returned across the Atlantic.   The refugees were finally accepted in a number of European countries, including Belgium, the Netherlands, the UK, and France, but most of these turned out to be unsafe havens and several hundred of them died in concentration camps during the Second World War.

And now we live in challenging times.  Economic distress has had a long-term effect in depressing prosperity. Technological change is destabilising for many. Changing cultural norms are as awkward and difficult for some people as they are refreshing for others. Populist political rhetoric inflames fears, doubts and apprehensions.  I’ve written before about the place of universities in all this.  We are hugely privileged places where ideas can be explored, where change is welcomed, where diversity is an untrammelled positive. In communities not far away from this, and every other university, that is often not true: change has undermined local economies and communities, the benefits of openness and diversity are unclear, and life is tough.  In his 2017 book The Road to Somewhere, David Goodhart outlines a deep divide between the ‘anywheres’ and the ‘somewheres’: anywheres are people at ease with globalisation, with cultural fluidity; somewheres are those for whom place, ‘locale’ is of overwhelming importance.  Universities are full of anywheres.

Last week’s news was a reminder of just how tough some of these pressures are, and that terrifying figure of sixty-eight million refugees is a reminder that the forces creating these pressures are not going to be alleviated soon.  It’s tempting for universities to turn inward onto their own priorities – tempting, but wrong.   At the end of this week, the UPP Civic University Commission arrives in Sheffield to take evidence as part of its inquiry into the civic role and engagement of universities – their role as ‘place-makers’.  It draws together a diverse range of commissioners from higher education, government, education, law and business, and it is chaired by Lord Kerslake, who is, of course, also the chair of Hallam’s Board of Governors. I’ll be giving evidence alongside others, exploring the ways in which universities can reach out beyond their staff and their students, their teaching and their research, to shape their communities and, beyond that, their world.

One thought on “Home and away”