I’m relying on the internet here, which as we all know is far from being the most trustworthy of information sources.  A ‘promise of barmen’, a ‘bench of bishops’, a ‘rookery of clerks’, an ‘observance of hermits’, an ‘alley of clowns’: I can understand those collective nouns and they have a reassuringly eccentric feel.  It turns out that a ‘draught of butlers’ is not, as I had believed, from P.G. Wodehouse (but you feel it should be), whilst the attractive ‘confederacy of dunces’ goes no further back than John Kennedy Toole’s cultish novel of the same title, written in the 1960s but not published until the 1980s.

Others from the lists I consulted look to be less traditional and rather tricksy:  a ‘trip of hippies’, a ‘conjunction of grammarians’, a ‘clutch of mechanics’ all seem a little bit too clever by half – though I did raise an eyebrow at ‘a clutch’ being the collective noun for testicles  – I’m not sure that they need a collective noun, but then I didn’t do A-level Biology.  But what about a collective noun for academics?  The best collective noun I am offered by the internet is a ‘faculty of academics’, which is too predictable and institutional, and whilst a ‘pomposity of professors’ is perhaps both rude and all-too-often accurate, a ‘drift of lecturers’ is too stereotypical, and I hope outdated. At least for me, a ‘quiz of teachers’ doesn’t really capture very much.

It’s not a collective noun, but there is a new entity in the University this month: the Academic Assembly.  The intention of Academic Assembly is to extend participation in horizon scanning and debate on strategic implementation and policy development to a wider group of academic staff across the University.   A participation of academics?   Meeting regularly, it will offer early thoughts on the development of policies – akin to a ‘Green Paper’ stage, enabling academic staff to feed into thinking before ideas are firmed up.  A deliberation of academics?  It will also enable more intractable ideas where there are, understandably, a range of different perspectives to be discussed in order to throw light on the range of views and on possible ways forward.  A debate of academics?  Academic Assembly is intended to supplement formal forums for decision-making across the University. A forum of academics? 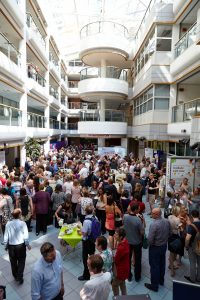 It’s not a collective noun, but there is a new entity in the University this month: the Academic Assembly.

The first meeting of Academic Assembly takes place a week on Wednesday; although it is pitched at academics, we also encourage those working in academic support to attend.  The agenda provides a taste of what we’d like Academic Assembly to be: open, deliberative and at least a bit challenging. With that in mind we will be considering a progress report on the Transforming Lives strategy and a presentation on the Creating Knowledge Implementation Plan.   Each Academic Assembly meeting will also include a formal debate on a lively – and non-straightforward – academic issue. The topic this time will be a discussion on the institutional approach to capping marks for late submission. A disagreement of academics? The full agenda will be issued to those registered to attend ahead of the meeting. An attendance of academics? The meeting will take a “town hall” format where contributions from the room are encouraged. You can register for the first meeting, which will take place Wednesday 25 April 2018 (14.00-16.30) in room 6620, Adsetts, City Campus. An invitation of academics?

‘Opinion [he meant debate] amongst men [he meant people] of goodwill is but knowledge in the making’ wrote John Milton in his 1644 great essay for a free press, Areopagitica.   In an increasingly intemperate age of social media and ‘fake news’ we are not short of ‘opinion’, but all too rarely is it conducted in a spirit of goodwill.   Academic Assembly will be an exception. An engagement of academics.