Perhaps all photographs are – or were, when there were fewer of them – poignant.  Photographs taken just before the First World War are especially touching: people captured, in grainy monochrome going about their daily lives, enjoying themselves, on the way to somewhere, all of them with not a clue about what was to come.  There’s a particularly well-known one, usually titled Three Farmers on their Way to a Dance, which catches three German young men, in the height of sharp-suited early twentieth century fashion, clearly walking somewhere.  We don’t know their identities, nor what happened to them, but it’s impossible to look at the picture and not speculate about their fate in the conflict which followed. The American novelist Richard Powers used the title of the photograph as the name of a novel, and wove a narrative about attempts to unearth their story, and the historian Charles Emmerson adapted the idea in a fascinating book called simply 1913 – exploring global cities just before their world was shattered. 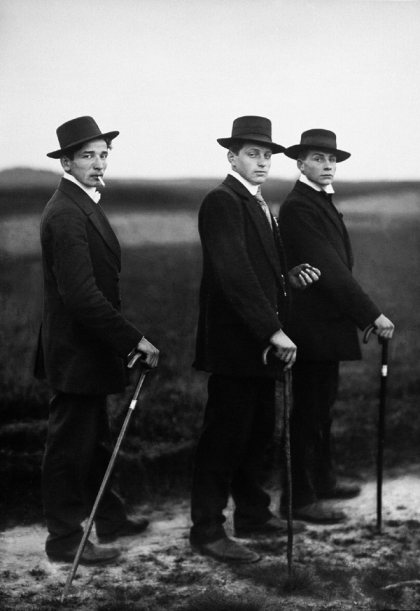 The photo of the three young farmers (credit: August Sander)

If all this is particularly striking when the great privilege of hindsight allows us to know that what happened next was in some way cataclysmic, the fact is that the poignancy of these photographs captures something universal.  We make our plans, we have our ambitions and our aims, but we never know what is around the corner: what will come next, whether in our personal, family or professional lives, or in social and political life.  I’ve made the point in presentations recently that not a single university had ‘leaving the European Union’ on its risk register in the first half of 2016.  The test for any of us is probably not predicting the future, which – as anyone who has ever placed a bet or read a horoscope knows – is really a mug’s game, but on how we react to events: as someone once said, it’s about knowing what to do when you don’t know what to do.

On 28 February, the Office for Students (OfS) was formally launched in London.  In many ways, there is a familiarity about it.  HEFCE staff will be transferred over to the Office for Students. The Chief Executive, Nicola Dandridge, is a well-known face in the sector, having previously run UniversitiesUK, the representative body for all universities. Michael Barber, the Chair, has been a fixture in education and public policy for two decades.  But the OfS marks a significant shift in the regulation and management of the nation’s universities. The Higher Education Funding Council for England (HEFCE) was a funding council, responsible for ensuring the universities were going concerns, able to intervene to head-off unforeseen problems: a sometimes stern, but always patient, distant relative.  OfS is quite different.  It is a regulator, with a primary responsibility to ensure that the HE sector operates in the best interests of students.  This is a fundamental shift in the sector, and it is in many ways unclear what will happen next, not least given the noisy press clamour about universities.  OfS has to make sure that the market functions, and its concern with institutions is simply about whether they are working effectively in the interests of students. Its birth has been somewhat fraught, with public concern over one of the early Board appointments, but it is a powerful new entity in the landscape.

Just before the OfS launch – and perhaps something of a curveball for the new body – government finally did announce its review of student finance.  I’ve written before about the deep challenges of bringing about change in the funding regime, squaring the issues of costs for students against the need to ensure that universities are funded for the job they need to do.  The review – an internal government review with an external advisory panel chaired by Philip Augar, an author and hedge-fund manager – has been handed wide terms of reference and, certainly from government, high expectations. But put together the prospects of a new regulatory regime and a reset of the funding basis for higher education and we’re back to those difficult questions about what happens next.

As this blog is published, I’ll be on a train to chair the 2018 Teaching Excellence and Student Outcomes Framework (TEF) assessment process; the best part of a week in a hotel with TEF panellists and assessors working through the submissions to the current TEF assessment, and beginning to firm up institutional judgements for a range of universities, further education colleges and, in larger number this year, alternative providers. By genuine coincidence, as we begin work, government will publish the technical consultation on the transition to a subject-level TEF, with two alternative models being piloted.  One is a ‘top-down’ model which looks at subjects where there is particularly strong divergences from their institutional data,  and one is a ‘bottom-up’ model working from individual subjects, across thirty-five subject codes, to an institutional judgement.   There are a host of complex datasets underpinning the technical consultation, including the familiar NSS material, but also the less-familiar LEO data on earnings and employment after graduation.

Relatively soon after all this, the membership of assessment panels for the 2021 Research Excellence Framework (REF) will be announced.  The 2021 REF – rather as every Research Assessment Exercise and REF has been – is not a re-run of previous REFs, but includes significant changes in practices around metrics, and around the assessment of research impact.  And it will report following a historic divorce between teaching and research – hitherto both overseen by HEFCE, but research now migrating to the new UK Research and Innovation (UKRI) body – and as the UK leaves the EU, which has been such a powerful driver of research funding.

Regulation, finance, new teaching assessment, a new research framework:  at speed, the higher education landscape is being remade.  Each one of these is significant, but interacting, and against an unfathomable political and policy background, they take us back to those poignant photographs: what happens next?  And of course, the same answer – we just don’t know.  We have to keep our institutional purpose and goals in mind and, really, be ready for whatever comes next. It was Harold Macmillan, Prime Minister in the early 1960s and himself wounded three times in the First World War, who, when asked what kept him awake at night worrying, is supposed to have said ‘Events, dear boy, events’.