The new academic year begins.  Over the weekend, students fresh and returning have been making their way to Sheffield, full of anticipation for the year ahead.  This – after all – is what the University is all about.  I looked back, as I wrote this blog, at what I wrote a year ago and – this is a bit shameless – there’s a paragraph which bears repeating.  This is what I said then and, so, again:

Over the next few weeks, we will welcome something over eight thousand new students to the University –  something like seven thousand of them new undergraduate students, embarking on what will be a life-shaping and, we aim, life-transforming experience. The sheer logistics of the operation required to recruit, sustain communication with, enrol, register and then teach our new students is enormous, and depends on a vast coordination across the University.  But starting anything new is always at least a bit threatening, and we should, all of us, remember that there will be a large population of excited, apprehensive, expectant, worried, and perhaps not a little lonely, newcomers around.  We welcome new staff too, throughout the University, and each of them will find the way we do things here slightly different from the things they are used to.  All of the newcomers – students, staff – will find themselves depending on us in some way or another. 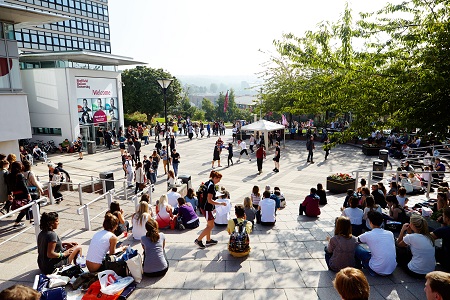 Over the next few weeks, we will welcome something over eight thousand new students to the University (photo: James Shilton)

The summer has had its own rhythm.  At the beginning of August, the University heard its 2017 National Student Survey results.  After two years in which our overall satisfaction score had fallen, in 2017 we pushed the overall score up by one percentage point.  Given that the overall satisfaction rate across the sector declined by a percentage point, that modest improvement was enough to put us in the top dozen improvers and in the top fifty universities for overall satisfaction.   In a highly competitive, tightly bunched sector that makes a difference – but, as anyone will quickly realise, it’s not enough.  If we’ve shown that we can turn scores around, we have to build on that and make rapid progress, particularly in departments and courses which are reporting lower scores.

Hard on the heels of NSS came Confirmation and Clearing.   We all know that the number of eighteen year olds is continuing to decline and that we went into Clearing – along with almost all our peers – with more work to do than in previous years.   Once again, the Clearing operation was superbly managed, drawing on expertise and enthusiasm across the University and with very good feedback from potential students and their families.  The overall out-turn was a striking success, meeting, and in some cases, exceeding targets across the University; and, certainly so far as we think, meeting targets without lowering tariffs across the University. And, now, we transition from recruitment activities to enrolment.  We all know – don’t we – that first impressions are enormously powerful, so it is important that we welcome all our students and get their studies off to the best possible start.

During 2016-2017, I was delighted to lead the publication of Transforming Lives and to work with the University’s leadership team to reshape our governance and project management to deliver the strategy.  The University now needs to move into confident delivery mode, making significant progress on the strategy pillars – Shaping Futures, Creating Knowledge, Leading Locally and Engaging Globally, and Building a Great University.  Each Pillar Board is developing programmes of work which shift the dial on the University’s performance and influence.  Last week, one of the major programmes of work under LLEG, South Yorkshire Futures, was launched by the government’s minister for education and childcare, Robert Goodwill.  South Yorkshire Futures repositions the University to co-ordinate improvements in education attainment, aspiration and progression across the region.  It makes a significant shift in our engagement with the region, which is so important to us.

There are fundamental shifts in the policy context for the University. Some of these are obvious – the development of post-graduate loans, which has been a welcome boost to our PGT recruitment; the unfolding of Brexit; the dynamics of the undergraduate market in an age of demographic decline.  But there’s something else, and another feature of the summer, which is a shift in the public debate about universities.  It’s not been the best of summers for universities, which appear to be too often on the back foot in public debate about access, about influence and engagement, about costs and efficiency, about the value for money of a degree.  A good deal of these debates are light on evidence, but in an increasingly febrile public mood, as Brexit destabilises government’s thinking, universities have been too often in the wrong place.  I’ll write more about this in the next blog, but one of our tasks is to project the fabulous things we do as a university locally, regionally, nationally and globally.

I always enjoy the beginning of the academic year:  new beginnings are always moments of enthusiasm and expectation.  Let’s, together, make the very best of this one.