There’s a scene in Annie Hall where the Woody Allen character recalls his elementary school classroom. The film transports him back to the classroom as his adult self, surrounded by his classmates as the children he remembers. He wonders what happened to them. In turn, the young pupils stand up and voice what has happened to them since school – playing with stereotypes, some destinations sound apparently predictable and some provocatively unpredictable. It’s a throwaway scene in what’s really a comic movie, but it poses a question about children’s trajectories and outcomes.

There are few audiences more demanding than young children – as the now widely-watched Professor Robert Kelly knows only too well. They sat (mostly) with great patience through the presentation of awards, which was a remarkable achievement given that many were as young as six, seven or eight. They were – almost all of them – in a completely new environment, in buildings and teaching rooms on a scale quite different to those they are used to. Sheffield Hallam’s engagement with the Children’s University is well established, and it is an important part of our wider mission to extend horizons and raise aspirations. A much better speaker than me captured this by inviting the children to look around the lecture theatre for a doctor, a gas engineer, a scientist – his point was that these young children could and perhaps would be those things – the youngsters couldn’t see them, but he encouraged them to imagine. 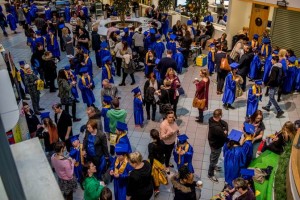 Some of our Children’s University guests.

On Thursday, the Department of Media Arts and Communication hosted a BBC Newsday, welcoming students from three Sheffield schools to the MAC news room. The BBC Newsday invites school pupils to be journalists for a day, putting together story packages, researching the content, scripting the news item and presenting it in either text, audio or visual media. This was the first time the University had engaged substantially with Newsday, and it was good fun to be able to see the youngsters pull together news stories and feature items.

Both the Children’s University and the Newsday event drew youngsters into the University – the CU event also drawing in parents and carers. For most of them, it was their first time in this, or any other, university. Because we work here, we take so much about the way the University works for granted. But that’s a mistake. Universities can be forbidding places for those who are not familiar with them.

A major new piece of work is getting underway to further enhance the University’s widening participation mission. The National Collaborative Outreach Project (NCOP) is a large scale HEFCE-funded project which is focused on accelerating participation in higher education in low participation wards. Sheffield Hallam is leading the project in south Yorkshire, working in partnership with the University of Sheffield in one of the biggest NCOP projects nationally. The over-arching lesson of efforts to extend participation in higher education is that there are few short cuts: universities need to work collaboratively, with each other, with colleagues and with schools, and to do so through multiple routes. Last week’s events were visible symbols of our engagement.