By all accounts, the Prime Minister will trigger the formal notification of the UK’s intention to leave the European Union on Wednesday this week. It will open a tortuous series of negotiations and, barring unforeseen eventualities, means that the UK will leave the EU in the Spring of 2019. There is some legal disagreement about whether the formal notification can be subsequently revoked.

During the referendum campaign last year, I was clear about my view that the UK should remain a member of the European Union. I received some communications that I was abusing my position and that not everyone agreed with me. Needless to say, I don’t think I was at fault – I think it is important for institutional leaders to intervene in policy debates when the interests of the university are at stake. Along with every other Vice-Chancellor in the UK, I was – and am – strongly in favour of the UK remaining in the European Union. One of my principal responsibilities is to our students. Brexit destroys their rights to live, work, study, travel and, indeed, fall in love, across the European Union. By any measure this is a severe loss of their rights as European citizens. Another of my responsibilities is to the long term intellectual development of the University. Exit from the European Union means leaving the largest common research space in the world, in which academics have been free to collaborate within a common legal framework without the tiresome need for multiple bi-lateral agreements. The referendum result may have marginally been against membership of the EU, but the interests of the university and its students have not changed. 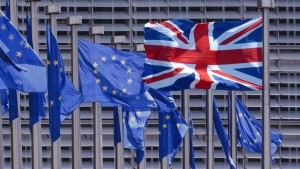 However, the government intends to proceed with negotiations for departing the EU. As those negotiations proceed there are three principal concerns that I have as Vice-Chancellor of one of the UK’s largest universities.

The first relates to research. Ideally, the government would negotiate continued access for UK universities to EU research programmes and the easy international collaborations they afford – non-EU countries including Norway have this. However, it now seems unlikely that they will seek to do so, because EU research programmes are governed by EU law and the European Court of Justice, which the UK government seems determined to leave. The UK is a net beneficiary of EU research: we get out more from the budget than we put in, so the next policy ask would be for the government to maintain research investment at least at the levels of EU research spending. Here, current signs are good. The government has recognised that a strong knowledge economy is essential to a post-EU UK, but they need to buttress that with investment which generates international collaboration, even if the real effect of that would be to see some UK spending supporting academic collaborators elsewhere in the world.

The second relates to students. Brexit will mean that EU nationals will be able to access UK universities only as international students, and that UK nationals will be treated reciprocally. There is a view that this might produce an increase in the number of EU nationals studying in the UK, since current financial arrangements do not incentivise UK universities to recruit in EU countries outside the UK. However, it is more likely that such students will find their way to more competitively priced continental universities teaching in English. Even so, the key issue will be to see a visa regime which is permissive for international students from wherever they come. That certainly means removing students from migration numbers, on which the Prime Minister, albeit not senior ministers, has so far been unbending. In terms of UK students, continued access to Erasmus mobility programmes is important – though, again, the signs here are not good because of the distaste government seems to have for the jurisdiction of the European Court of Justice, which governs such programmes.

The third concern relates to staff. Staff mobility across the EU has been an important aspect of freedom of movement. Some 20% of UK university staff are from other member states – the figure is a little lower here at Hallam. They add to the intellectual and cultural vibrancy of all universities including this one and they are hugely important, and welcome here. There has been – rightly – massive pressure to guarantee the residence entitlement of EU citizens already in the UK, but it is not simply a matter of residence – it is also about citizenship and rights. Universities operate in a globally competitive market for talent, and successful academics could work almost anywhere, which means that the offer in the UK, for academics and their families, has to be compelling. For a good number of academics, the attraction of free movement in a common international research space has been appealing. Many EU citizens working in UK universities are relatively early in their careers; their salaries fall below the highly skilled employment threshold in the non-EU visa system. It is absolutely essential for UK science and knowledge creation that we have a visa regime which encourages movement of staff, including junior and early career staff – the lifeblood of the future of knowledge creation and research.

These are important challenges. It would be naïve to expect them to be settled or addressed quickly. The negotiations which will be triggered this week are of mind-boggling complexity across the full range of legal, economic, social and financial issues. I still believe that by leaving the EU, the UK government is making an error of immense proportions, which will weaken the UK culturally and impoverish us economically. It is an error completely at odds with our long-term national interest: the longer this goes on, the more surprising I find it that the national interest has not re-asserted itself. As the discussions unfold, like all Vice-Chancellors, I will be lobbying hard for outcomes which are in the interests of universities, but – more – in the interests of our young people, whom we seek to educate as global citizens.