When Geoffrey Howe became Chancellor of the Exchequer after the 1979 General Election, one of the first people to contact him was his Labour predecessor, Denis Healey. Healey wanted to tell Howe that although there were huge challenges in managing the UK economy, the challenge of using the kitchen in Number 11 Downing Street was almost as intense: a couple of antique electric rings, an ancient gas cooker and a leaking dishwasher. There was never a good time to find the money to improve the Chancellor’s kitchen, and the Howes muddled through for several years. 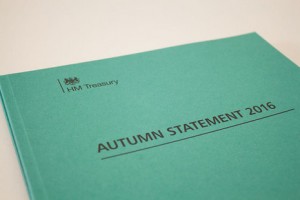 It is Denis Healey we have to thank for the annual Autumn Statement: the UK economy in the 1970s was weathering intense shocks from oil price rises, raging inflation and intractably rising unemployment, which invariably called for two big interventions a year. As time has gone on, the existence of the Autumn Statement alongside the Budget has encouraged Chancellors to keep interfering. Last week’s was the last in its present form. The current Chancellor has decided to move the budget to November and use the Spring for a work-in-progress update. But in many respects, Philip Hammond faces challenges as intense as those of the 1970s as he tries to plot a route for the UK economy outside the European Union.

The Treasury analysis alongside the Statement last week painted a bleak picture of stuttering economic growth in a low-productivity economy, an economy whose underlying weaknesses have been concealed by the relative success of the London-centric financial services sector. Regional disparities in economic trajectory are starker in the UK than anywhere else in the European Union. The influential regional geographer Philip McCann sees the UK ‘decoupling’ into three regional economies: London, Scotland, and the Midlands and Northern England. In 2013, the Economist described the regional problem as the problem of rugby union and rugby league: two sports, superficially the same but with different rules, rewards, teams, cultures, audience and geographies – and the RL/RU map seems to overlay the regional economic disparity well. The irony of the Brexit vote is that it has been EU regional spending which has by and large concealed the scale of the regional imbalances in the UK economy – the social impacts of this were traced in the recent report from Hallam’s CRESR. Those regions most dependent on EU funding were most likely to vote to leave.

The Autumn Statement was blunt about the UK’s productivity problem – productivity increases have been stalled since 2008. It proposed major investments to remove barriers to improved productivity in housing, transport, research and digital communications. The transport investment includes improvements to the A66 across the Pennines, and inter-regional communications (as opposed to London-region links) are an important priority. However, the £700m for improved fibre connectivity to increase broadband speeds is small beer compared to the several-billion euro French investment in the same innovation.

In an economy which needs to be more serious about improving productivity, research and innovation are critical, and the planned £2billion boost to public spending on research by 2020-2021 in university research acknowledges this. There will also be additional investment in research and development from a new £23billion funding pot, the National Priority Infrastructure Fund. NPIF will provide £4.7billion in additional funding for UK R&D by 2020-21, although it is only by that final year that the additional research investment will reach £2billion. Even so, this is a welcome recognition by government that universities have the capacity to drive innovation economies. It will be important for Hallam to re-position itself to be able to access this funding in order to maximize our strategic leadership regionally.

The Autumn Statement also set out the first steps in the Government’s industrial strategy, and drew extensively on the Science and Innovation Audits – Hallam supported the Sheffield and Lancashire SIA as a way of identifying innovation investment priorities in the region and we will continue to work to ensure that the city region is able to sustain inclusive, high-skill growth. However, the investment in research and development, the focus on regional innovation programmes and the move towards devolved government taken together suggest a very different landscape for the sector as a driver for successful economies and societies.

Alongside the budget, government published a Northern Powerhouse strategy. There was little new or specific in it but a welcome recognition of the work in place across both Sheffield universities to drive skills. We will need to work with our partners across the region to ensure that this work is at the core of the region’s future.

We still do not know what Brexit will look like and the challenges remain.  The regional inequalities – which partly underlie the Brexit vote – are deep and profound.   They will not be addressed in a single budget. What the Autumn Statement began to do was to sketch out a different landscape for regional development and the place of universities as research and innovation hubs. Our task will be to turn that into practical, deliverable programmes.