You know the puzzles: look in one way, and it’s a vase; in another way it’s two faces in profile. Optical illusions of all sorts make the point that what you see depends on what you are looking for. As I write this, we are halfway through the fortnight-long highlight of Sheffield Hallam’s year which is graduation. By Friday 25 November, something like 6000 students will have walked across the stage in Sheffield’s imposing City Hall to receive their degrees.

I’ve spent a good portion of that time sitting on the stage, and watching the students walk past – sometimes a blur of gown, sometimes a precipitous totter on high heels (one of my colleagues spotted one of the pairs of shoes and said afterwards ‘Did you see – a pair of…..’ and named a much sought-after shoe designer). In other ceremonies I’ve stood centre stage and congratulated students as they stride across, to the applause of all and sometimes to the whoops of delight from families and friends. 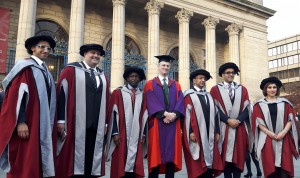 PhD graduands from our Materials and Engineering Research Institute with Doug Cleaver, Director of our Doctoral School

It looks different from the well of the hall. From there, the graduand walks across the stage against a formal backdrop of university staff in full academic dress. There’s an element of theatre about it – something Gilbert and Sullivan-esque about the gowns, doffing and speechifying. From the stalls and circle, graduation is a show. It needs to be done as well as any West End production and the behind-the-scenes Hallam staff make sure it is. In Robert Winston, the University has a Chancellor who, as well as being a distinguished academic and public intellectual, is a seasoned pro – able to read, and play, the audience with aplomb.

And for some it looks very different. In some of the first week’s ceremonies we made posthumous awards to the families of students who had died before they could complete their studies. For these families, this was part of the process of grieving, and the moments I and my senior colleagues spent with those families were, for them, precious, and a reminder of the fragility of all we take for granted.

Graduation ceremonies matter in different ways to different people. Above all, of course, they are about celebration. I said in my closing speech that it was a party ‘without the balloons and fruit jelly, but with the funny hats’. And it is a party marking something worth celebrating. The University is presenting its graduates to the world, and it is a joy to do so. Every graduand is a story, of course. During last week, an email was forwarded to me from a parent of a graduand who had encountered challenging mental health issues during the course.   The email said that the “help and support she has been given since then has been fantastic and is the reason that she was able to collect her degree”.

There isn’t a huge amount of time to talk to graduates who pass across the stage, but there are some questions which one can ask, about current employment, about the course. And it is clear that the University has added not just value, but also values, to its students. They talk with glowing expressions about their tutors, and about the jobs they are currently doing which are stretching them both intellectually and personally: the social work graduates working in child protection in Rotherham, the engineering graduates on project management with Rolls Royce. Some still have a distance to go before their personal confidence shines out – though I was taken aback by the Business School graduand who, having pitched her current business idea to Robert Winston in a brief conversation, turned and did so as briskly to me.

Many of our ceremonies are also opportunities to celebrate other excellence. The Inspirational Teaching, Research Supervisor and Student Support Awards we celebrate in ceremonies are a reminder that great learning invariably depends on great teaching. The enthusiasm of graduands when we make these awards is remarkable.

And in many ceremonies we are able to confer honorary degrees. Our honorary graduates are important to the University; partly as role models; partly as a reminder that learning does not stop at the end of a course or a degree; partly as a way of making connections with those who share the University’s values or have some connection with the University and city. We are honouring achievements, and more than that, the living out of values: Clive Stafford Smith, the humanitarian lawyer who has campaigned so effectively against the death penalty; the human rights and penal reform campaigner Vivien Stern; the OECD educationist Beatriz Pont, who has led system reform internationally for more effective and inclusive education systems; the veteran film-maker and articulate advocate for social justice, Ken Loach. Values matter. On the day this blog is published, we will award an honorary degree to the medical scientist, innovator, artist and poet, John Martin, whose distinguished career in cardiovascular medicine was pursued after his early studies in philosophy.   His magnificent poem, The Second Polish Corps, draws together his medical expertise, philosophy and profound humanitarianism. Its ringing conclusion reminds us of “the infinite value/ Of all human beings”, which is a worthy thought for a graduation blog post.