There’s an episode in series one of The West Wing (it’s episode 18, ‘Six Meetings Before Lunch’, a day I can understand), in which Sam Seaborn, the junior speechwriter, is talking about education policy and defence policy. He says “Schools should be palaces. They should be incredibly expensive for government and absolutely free of charge to its citizens, just like national defense”.

On Friday last week, SHU was able formally to open a genuine ‘palace of learning’: the new Charles Street building for the Sheffield Institute of Education. 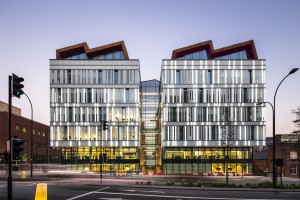 The building was declared formally open by Doreen Lawrence, Baroness Lawrence OBE, who spoke movingly of her own experience of education as a pupil, parent and as a teaching assistant in south-east London. She was joined by Sir Anthony Seldon, now Vice-Chancellor at the University of Buckingham, Sheffield Central MP Paul Blomfield and Hallam’s own Professor Nick Hodge, for a debate on what an inclusive education system might look like. The following day, Saturday, the building was lively again, with an education conference for practitioners which drew in key national figures, including Dame Alison Peacock. The illustration below was constructed at that conference: 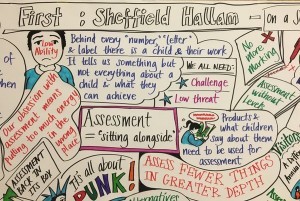 The new Charles Street building is gorgeous: one of the finest homes for an institute of education anywhere in the world. Sitting across, and preserving, the historic street plan, with exceptional thought having been devoted to the ways in which formal and informal learning happens, to opportunities for students and academics to work in small groups and to integrating technology into learning. It is a great resource for the University and joins other, recent stunning physical environments for learning including the Heart of the Campus building at Collegiate and the Sheffield Institute of Arts building at the old Head Post Office. Not far behind are the re-workings of the Sheaf, Eric Mensforth and Harmer buildings.

One of the things which I noticed when I came to Hallam for interview, just under a year ago now, was the thought which is being given to learning environments and the ways in which young people engage with their studies. We’ll soon be welcoming Generation Z students to the University for the first time: young people who were born after the development of the internet, for whom Wi-Fi connectivity is something to be taken for granted, for whom email is pretty old-fashioned by comparison to FaceTime and WhatsApp.

But new buildings which support flexible approaches to learning and teaching are only a part of the story. Any technology, and any building, is only as good as the way you use it. The other highlight of the end of last week was the opportunity to sign off letters to winners of the University’s Inspirational Teaching, Outstanding Student Support and Inspirational Research Supervisor awards for this year. A total of 4707 nominations were received from students for 1426 individual staff and teams. After two scrutiny processes, including both student representation and external review, twenty-six University Inspirational Teaching Awards, four Inspirational Research Supervisor Awards and two awards for Outstanding Student Support have been made.

And beyond this, the Charles Street building is, just as much as the SIA and Heart of the Campus buildings are, a challenge for us: not just to use the buildings to shape student learning, but to enable engagement with these buildings beyond the University, to make sure that these palaces of learning reach outward as well as inward.