It’s a new term, and a new season: the headline is itself a quotation from Browning’s poem, Home Thoughts, from Abroad, which begins ‘oh, to be in England, now that April’s there’. The clocks have gone forward, bringing lighter evenings and a sense of Spring arriving. It’s the beginning of – either – my second term at Hallam or my first Spring in Sheffield, and there is, for me, a sense of change getting underway. That was personal as much as professional over Easter: my third daughter married her American fiancé in New York, which meant that my Easter was spent in the Big Apple, around a family celebration which was a new beginning for her. 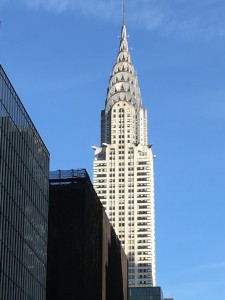 Around the celebration – and getting to know Anna’s fiancé’s extended family, a large number of whom had descended on the city for the wedding – we took the opportunity to explore New York. Nicola Rawlins, who leads SHU’s work on student recruitment and enrolment, had tipped me off to visit the Tenement Museum- and we did, on a bitingly cold New York day, the wind whipping mercilessly along straight streets.

The Tenement Museum was established in the late 1980s, in what was at that time an unrestored tenement house, lived in by successive waves of newcomers and refugees to the New World: Irish arrivals in the 1840s, 1850s and 1860s, and, later, Jewish and Italian arrivals. You choose one wave of migration and are then taken around a part of the tenement in role, looking at the physical surroundings as they might have been and at the documentary and photographic records which the outstanding team at the Tenement Museum have unearthed, doggedly tracing the history of families who were looking for the American Dream. If you want an image of change, there might be none better – and, in a different way, it’s more or less what my daughter has embarked on. All new beginnings, of course, are bitter-sweet as they involve endings also.

In a New York bookstore, I picked up a book I’d been intending to read for some time – Robert D. Putnam’s Our Kids, which contrasts the experience of young people growing up with him in a mid-west town at the end of the 1950s with the experiences of young people growing up in the more divided, globalized and threatened world of the early twenty-first century. Although (it’s a long flight back, so the book is almost read) Putnam is not rosy-eyed about the 1950s, with deeply embedded gender roles and persistent racism, he is also sharp about what he calls the American Dream in crisis. In the 1950s, any number of informal ties across families bound relatively rich and poor together, and the less well-off were able to progress through high school to college and rewarding jobs. In the 2010s, the gaps are bigger, and the challenges of crossing them much greater.

He picks up on another book, one I’ve used a lot, Claudia Goldin and Lawrence F. Katz’s The Race between Education and Technology: until the 1970s, opportunity was increasingly opened up by education in the United States and education raced ahead of technology, which made the American population the most technologically literate and best-educated in the world; since the 1980s, technology has raced ahead of education, driving increasing numbers out of the workforce and privileging the minority who have access to the best opportunities. It is, for me, a powerful reminder of why education matters so much, and why universities like Sheffield Hallam matter so much: our best chance of equalizing the race between education and technology, and giving opportunity to (in Putnam’s phrase) “our kids”.

During my first term I set out an agenda for the University – a university concerned with developing practical solutions to real world problems, the UK’s leading applied University. In the second term it probably gets harder – using that agenda to review the University strategy and developing our own practical ways forward. It’s about finding practical ways to create opportunities for staff and students which would not, without our own determined and coherent effort, exist. That’s the job to be started now that jet lag has slipped away.