In the year 1088, the Commune of Bologna ran into one of its periodic rows with the Catholic Church. It opted (never a cheap solution) to invite a group of leading lawyers to Bologna to provide commentaries on the ancient Codices of Roman Law for the commune (consultancy). Their work provided the basis for the establishment of a faculty of law in Bologna, and for the foundation of the University of Bologna – the first university to be established in Europe. Within a few decades, a faculty of medicine had been established.

From the very beginning of the idea of the European university, universities have been deeply entwined with their economies: engaged in workforce production and development, responding to the changing demands of local employers. For hundreds of years they have done this for a sometimes bewildering variety of professions – medicine, the law, the church, education, architecture, and so on. At its root though, the idea of a university has always been deeply engaged with the economy and with the relationship between theory and practice.

Our University is the present-day manifestation of the Sheffield School of Design – established in 1843 as the first institution of higher education in Sheffield to explore the relationships between design, art and industrial production. So, it’s a natural fit for us to be one of the first higher education providers to develop higher and degree apprenticeships – providing a new way to address key skills gaps and drive our economy forward.

With the Prime Minister himself personally pledging to create three million apprentices by 2020, it’s clear that higher and degree apprenticeships are a priority in Whitehall. But the value of these qualifications goes much further than simply a political pledge: they have to make business sense for the rapidly changing economy of the twenty-first century. In a competitive and evolving market, there is an increasing demand for higher-level skills. Our experience shows that, through working with a range of businesses and combining both vocational training and academic learning, highly effective programmes can be created to fill skills gaps with a clear line of sight to work.

The potential benefits are clear. Employers gain access to relevant, responsive, highly-skilled employees, whilst increasing staff diversity and improving retention. Programmes are attractive to individuals too. They provide the potential to integrate technical, theoretical and practical training components in both university and workplace settings. Individuals receive a salary, qualify with a degree or other higher level qualification, with a guaranteed job at the end of the programme. Fees are covered jointly by the Government and employer. 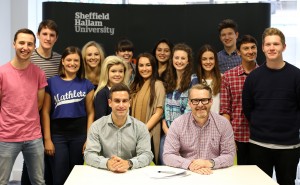 Building on our extensive expertise in working with businesses and professional bodies, we successfully bid for funding for over 240 higher apprenticeship places from the Skills Funding Agency – the highest allocation for any university – in 2015. Now, we work with employers such as Nestlé and JCB on the Chartered Manager Degree Apprenticeship and Higher Apprenticeship in Advanced Engineering. Yet this is only the beginning. We have exciting plans to offer programmes across even more sectors, in partnership with household names like Kier, Network Rail and JCB.

As well as cementing our position at the heart of our city-region, developing these qualifications with employers helps to drive growth through the creation of jobs, delivering a skilled workforce key to the ongoing success of the regional economy. It is a natural evolution for universities – as Bologna was in the eleventh century and the Sheffield School of Design in the nineteenth – determined to be at the core of the development of their regions.

As National Apprenticeship Week begins, I hope you will share my pride in the positive impact our apprenticeships have on individuals, businesses and the wider economy.