As the decorations were being put away for another year, one of my daughters sent me this link, with a note saying ‘you can use this for your next blog’. Since we are just coming out of the season for giving and receiving, I’m happy to take up her suggestion. But the BBC story on the challenges facing universities in 2018 makes for a depressing read to kick off the new year. With student fees frozen, university income is also frozen, against rising costs. The government has begun a review of student finance; the advertising watchdog has criticised universities for the claims some have made in their desire to recruit students; senior pay and perks have been in the news, and the regulation of the entire university sector is being overhauled with the arrival – from New Year’s Day – of the Office for Students, accompanied by some controversial appointments to its board.

2017 does seem to have been something of an ‘annus horribilis’ for universities, who found themselves too often on the wrong side of unhelpful news stories.   There’s one argument that this is an accompaniment of a more marketised environment in which universities are now operating.  Students, who once appeared ready to accept almost anything they were offered, have become more assertive – more ‘consumerist’ – in their attitude to their education.   The University of East Anglia lost a case brought against it by a student when it changed the pattern of option choices available on a course in ways which were at odds with the prospectus.  The Universities of Reading and Teesside were rebuked for claims about their positions in league tables.  The fall in undergraduate applications in 2017 – about 4% — could be seen as universities losing a battle for public opinion. Although, in fact, the decline is almost entirely due to the shrinking number of eighteen year olds: there’s good evidence that most students are confident about the benefits of going to university and about the choices that they make. The catalogue of difficult news stories has gone on: the coverage of senior pay has played badly for universities; the review of university funding, which follows Labour’s election pledge to scrap tuition fees; and ongoing debates around free speech and “no-platforming”.

It would be a real pity if we allowed the BBC website story to set the tone for the new year. There’s something profoundly depressing about the current tendency to look at our great institutions – universities, the BBC, the NHS, free museums – and see only the challenges rather than the huge opportunities they offer.  It seems that the national predilection to ‘mustn’t grumble’ has been replaced by breast-beating self-criticism. At Hallam we should begin this new year with confidence about our future: so far we have weathered a difficult shift in demographics – the number of eighteen year olds has been falling since 2012 – with strength. Our league table position is improving. We are progressing the implementation of an ambitious strategy, putting in place robust strategies for enhancing employability, teaching quality, research development and the digital and physical estate. Late in 2017, our plans for a transformational Health Innovation Park in north east Sheffield took a major step forward when the government’s Life Sciences Sector Deal asked for full business cases for two research and development centres on the site. On the last working day before Christmas, we secured Local Enterprise Partnership funding for a skills capital bid which will help us to provide accommodation fit for our developing degree apprenticeship offer. We are consulting on the ‘Hallam Deal’ which will overhaul our offer as an employer, and beginning implementation work on a professional services operating model which will make our operations fit for changing economic circumstances. 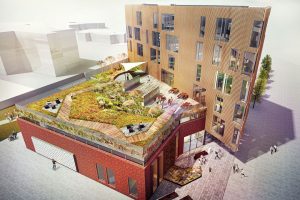 Our Advanced Wellbeing Research Centre, which will be part of the Health Innovation Park (artist’s impression)