Graduation is over for another year:  we have just completed two weeks of graduation ceremonies with all the aplomb that goes with them.  The gowns, like Christmas decorations after Twelfth Night, are put away for another year.  The graduation teams are able to take a breather – although a fair number were in evidence at Saturday’s hugely successful Open Day.  There’s something solidly predictable about graduation ceremonies – as I said in an address to one of the ceremonies, the caps and gowns hark back to the world of the medieval university.

But the world beyond the graduation hall is changing. New technologies rip through old economies. The prospect of life outside the European Union will alter how we trade, move goods and people around and make our way in the world. For a long time these questions about the future have been neglected by national governments – left to the market, to globalisation, to Brussels. Now we need active change.

To provide it, the government is launching its industrial strategy White Paper today. It was heavily trailed during last week’s Budget. In a welcome move, Theresa May has already outlined how the government plans to increase public and private R&D investment by up to £80bn over the next 10 years. The prime minister also announced £1.7bn to improve transport links within city regions. This comes as the UK is in serious need of new thinking to address fundamental long-term economic challenges: poor productivity, unbalanced regional growth and a weak track record in translating knowledge creation into inclusive wealth creation. 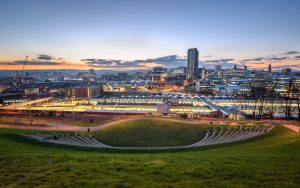 The industrial strategy needs to take a comprehensive, regional approach.

The impact of the financial collapse in 2008 and the recent decision to leave the EU have only exacerbated these deep-seated national problems. A long-term industrial strategy for the UK that includes proper investment in R&D and connectivity is overdue.  Sheffield Hallam’s own Centre for Regional Economic and Social Research has produced outstanding, and influential, research documenting the regional challenges facing the economy.

For the industrial strategy to make the most difference to people’s lives, it needs to take a comprehensive, regional approach. Simply investing in potentially successful industrial sectors – such as digital, advanced manufacturing and health technologies – will embed inequalities and fail to deliver inclusive growth.

We need this approach because performance of the overall UK economy is held back by stark variations in productivity. London and the south-east perform well above the national average, on a par with the most successful parts of Europe, while productivity everywhere else lags well behind. Sheffield and other former industrial powerhouses are among the least productive in the UK.

This is partly down to a long-term failure to address industrial decline, which many areas outside the south-east faced in the 1970s and 1980s. Tax revenues from a supercharged financial sector in the City of London have fuelled public spending. Governments were able to ignore regional inequality – until Brexit.

We need something now that goes beyond those old-fashioned, post-war regional strategies. It should explore what really drives growth in cities and regions – including universities. It should reflect the fact that the success of our knowledge economy depends on closing the gaps between innovation and implementation.

The evidence we have suggests that Sheffield Hallam contributes half a billion pounds to our regional economy, working with more than 2,000 employers every year through research, innovation and graduate recruitment. We are investing £14m in building the Advanced Wellbeing Research Centre to deliver health innovation. It brings together academics, industry and the medical profession to create the most advanced research and development centre for physical activity in the world – and attracts jobs and investment. The centre will also generate health benefits for the entire population by helping people exercise more effectively.

This is not exceptional: it’s what engaged universities do – though perhaps few are as energetically engaged as this one. With more targeted government support through the industrial strategy, we could achieve even more to help redress the productivity imbalance within our region. We set out some of these ideas in our response to the Green Paper on which today’s strategy draws – and we published it as Universities and the New Growth Economy: Sheffield Hallam and the Industrial Strategy.

The changing world calls for imaginative responses that drive innovation, using research into real world problems to stimulate new developments that have a real impact. We know universities can drive prosperity, building successful economies based around teaching and research. The next step is to build on their potential to foster inclusive growth.