Evelyn Waugh told the story in a letter home to his wife in May 1942. A British commando unit was billeted for training on the Earl of Glasgow’s estate. The Earl wanted rid of an old tree stump and the commandoes offered to blow it up for him. He was keen on the idea but worried about damage to a nearby plantation of young trees, of which he was very fond.  The officer said there was no danger: they could detonate the stump so that it fell on a sixpence.  But the combination of self-confident swagger and an alcoholic haze after lunch with the Earl was disastrous for the commandoes, who miscalculated by a factor of ten the amount of explosive needed. The stump, instead of falling quietly sideways, rose fifty feet into the air, taking with it half an acre of soil and the whole of the young plantation. Lord Glasgow trudged in appalled silence back to his mansion, where he found that the explosion had shattered every pane of glass. He retreated in tears to the lavatory. When he pulled the chain, the entire ceiling, loosened by the explosion, fell on his head.

The referendum has had a similar impact on UK government policy as that ill-fated gardening activity.  Across every policy domain there is devastation, and dazed politicians cower rather like Lord Glasgow in his toilet. Universities are caught in all of this. A sector which had been increasingly global in outlook and confident about its long-term prospects is working out where it fits in the reconfigured landscape.

Labour’s unexpected successes in the general election have been attributed to the mobilisation of the student vote in response to its proposal to abolish tuition fees. Some Conservative commentators have speculated that no future election should take place in term time. Damian Green, Theresa May’s most senior minister, suggested a re-think on fees, though other members of the government have since put up a robust defence of the current system. When a senior politician says that the time is right for a re-think, you can be pretty sure that a good deal of talking, and perhaps even some hard thinking, has already taken place.

Student fees pose political problems for both parties, and the popular sense of what caused the 2017 election upset will exacerbate those. Labour’s policy at the general election was breezily simple but had any number of unanticipated practical consequences: for example, the better-off, who are more likely to attend university, and the most likely to benefit from it economically, would gain most while the number of university places to be funded would be a matter of political decision, with near certainty that the better off would be more likely to fill the limited number of places.  For the Conservatives, it is difficult to address the contradiction between arguing that debt is such a bad thing that reducing the national debt should be the Government’s primary economic goal, whilst insisting that it is nothing to worry about for graduates.

The current state of student finance is a consequence of decisions in four inter-related areas. Between 2005 and 2011, University teaching was funded by a student fee of £3000 and a teaching grant of about £6000, the latter paid to universities by HEFCE.  Because prospective students generally have no money, they took out a government loan to pay the fee.  In 2011, the Coalition Government abolished public funding for most university teaching. Universities, facing the prospect of a 60% cut in teaching resource, back-filled public funding by increasing fees to £9000 – roughly the amount they had received before 2011.  Universities have always struggled to communicate that whilst fees for students tripled in 2011, their own revenue did not increase.  One of the policy surprises was that the fee increase had no overall impact on higher education enrolments, except for part-time participation which – not surprisingly – collapsed.  The second element of the overall funding regime relates to maintenance costs for living.  The scope of maintenance grants had been progressively restricted over twenty years but, in 2015 the Government finally abolished maintenance grants for students from the poorest families and then in 2016, removed bursaries for student nurses, replacing them by loans. Virtually the entire cost of higher education is now met by student loans, with some residual public funding for high-cost subjects.  Loan arrangements underpin the third feature: the repayment regime.  When first introduced, student loans were repaid at well below market interest rates, but Treasury acquisitiveness and determination to prepare the loan book for sale put paid to that and the interest rate has progressively risen, including retrospectively for earlier graduates, so that at 6.1%, it now looks expensive.  The shift from direct public funding to a loan-based system means that government has no reason to control overall student numbers – the fourth element of the financial landscape for higher education.  Student number controls, having been loosened in 2012, were abolished in 2015. In consequence, enrolment numbers in individual universities have been very volatile – more so given the overall decline in the number of eighteen-year-olds, which means that for the last seven, and the next four years, universities are competing in a shrinking market. 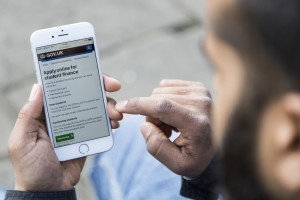 Virtually the entire cost of higher education is now met by student loans.

The demography of the general election vote almost certainly means change.  Student finance has moved into the ‘something must be done’ category for Government, but policy solutions look forbiddingly difficult.  Universities, including this one, are now feeling the pinch of student fees which have not increased since 2012 despite rising inflation.  Universities would like to increase fees for that reason alone: because UK universities generally have very low endowments, fees are their overwhelming income source.  For Government, abolishing fees, or supplementing fee increases by restoring an element of grant funding, probably cannot be done without re-introducing student number controls, because if the Government is going to fund teaching again it needs to set overall numbers to fix a budget.  But reintroducing number controls would freeze the university system between the winners and losers of the last two years – and at a time when some of those winners are projecting continued growth in student numbers to meet their borrowing obligations. And the Government is in the process of replacing its funding council – HEFCE – with the Office for Students, which is intended primarily as a market regulator on the policy assumption of greater university marketisation.  Even so, abolishing fees would do nothing to address maintenance costs which are a bigger issue for students from poorer backgrounds.  Reintroducing maintenance grants would take some pressure off students, but would also require some limit on student numbers, again, in order to enable budgets to be controlled. Reducing the interest payments on existing or future loans would be the most equitable development but it has a long-term impact on public funds – all those loans are sitting on the public accounts with assumptions about income against them – and is much more difficult to explain than simply abolishing fees. Worst of all, perhaps, the language of ‘loans’, ‘debt’, and ‘default’ makes it difficult to have a policy discussion which is not at root emotive: we all have strong views about indebtedness.

Over the past decade, universities, including this one, have essentially been moved from the directly funded public sector into something like the private sector, dependent on fee income for their long-term financial sustainability.  The shift means that unlike the rest of the public sector, universities have been spared the sharpest impacts of austerity.  Politicians across the spectrum have now realised that accumulated decisions have embedded inter-generational inequalities which look politically unsustainable and they need to find a workable solution – as ever in politics, the quicker the better.  If they want to unpick elements of student finance, they are going to find it very difficult, as their current contradictory positions suggest. These are questions for the long-term: financing Universities for the future and getting the balance right between individual and societal benefits of higher education.   It’s an issue which needs serious bi-partisan thinking. Once, governments would have reached for a Royal Commission. In 1995, facing similar, if more tractable problems, John Major’s Government established the Dearing Review, and civil servants now could do a lot worse than dust down the 1997 Dearing Report.  Without serious thought, the danger is that, like those commandoes on Lord Glasgow’s estate, politicians will misjudge what is needed.

One thought on “Who pays?: why student finance is an explosive issue”