We are programmed to move.  To survive in a harsh environment full of natural and human obstacles and enemies, early humans not only had to run, but also walk, balance, jump, crawl, climb, lift, carry, throw and catch things. Our ancestors routinely moved more than we do now: more people worked physically harder in their daily lives for most of history. In the relatively recent past, people were consistently more active. In the later nineteenth century, long walks and even hundred-mile bike-rides at average speeds of 8-10 mph seem to have been quite routine. I had a great aunt who walked for an hour and a half each morning – about five miles – to work for eight hours in a factory and then, at the end of the day, walked another hour and a half home.  I have hazy recollections of her, but remember, not surprisingly, a lean and wiry woman.

In the last century, the decline of routine physical activity at work and at home has been dramatic.  Technical innovations have made life better for us in countless ways – but they have also made us lazier.  Labour-saving devices at home and mechanisation at work are equally to blame.  In the past thirty years, the trend has accelerated – digital technologies have seen to that. I’m sitting typing this, using a pretty limited range of muscle groups. The result is a public health emergency as levels of physical fitness and physical activity collapse.   And I’m as guilty as anyone else – there’s always a pressing reason to postpone the visit to the gym, always just too much (sedentary) work to be done.

Move More Month is one solution to this familiar problem of modern life.  Now one week in, Move More Month encourages the people of Sheffield to get active and to record their physical activity throughout June to see how many combined minutes the city can record. It is supported by a number of city-wide organisations, including Sheffield Hallam, and is part of the wider Move More campaign. 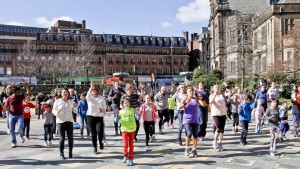 Move More in the Peace Gardens.

Move More is Sheffield’s physical activity strategy, and it has an ambitious aim: to transform Sheffield into the most active city in the UK by 2020. The Move More project is one of the programmes of work that is being led by the National Centre for Sport and Exercise Medicine in Sheffield (NCSEM, an Olympic Legacy Programme from London 2012), which is a partnership of 12 cross-sector organisations including the NHS, City Council, both Universities, the voluntary and private sector and leisure providers. Professor Robert Copeland in the Centre for Sport and Exercise Science here at SHU is the Director of NCSEM and the programme plays a key role in the development of the health and wellbeing of the City, as well as the plans for our Advanced Wellbeing Research Centre.

For 2017, workplaces across Sheffield are being invited to participate in Move More Month, by getting into teams and seeing how many minutes they can clock up during June. This year the workplace challenge is being supported by Yorkshire Cancer Research and will see organisations across the city being pitted against each other to see which has the most physically active staff.  Movement can be logged via activity devices (e.g. fitbits, strava) or using the Move More Sheffield app (available on Google Play and Apple Store) which has been developed by Sheffield Hallam, together with the University of Sheffield as part of NCSEM.  The app will automatically track activity and clock up Move More Minutes – I’ve just downloaded it.

Participants can track their individual and team progress on the Move More website, where users can achieve goals, view a timeline of activities and join other Move More competitions like the Steel City Derby. There are also hundreds of activities to get involved in during June, from rock climbing to walking football, zumba to parkletics – something for everyone.

Last year 5,500 people downloaded the Move More Sheffield app and more than 7,000 people got involved through various challenges including the workplace challenge.  Overall, the people of Sheffield managed to clock up an impressive 6.5 million active minutes but this year, organisers are hoping to hit the 10 million mark.

During March, alongside the official Varsity games, Move More challenged our two universities to see who could clock up the most minutes. Although we may have lost Varsity, we came out on top for the Move More Varsity challenge with Sheffield Hallam scoring 134,517 active minutes ahead of University of Sheffield’s 80,182.

Of course, Move More will not solve the enormous problems we face of making the population move more, more often.  But one of the lessons of public health reforms around the world is that small steps, sustained over time, matter.  You can make a difference.  Move more.