At noon, on 16 September 1920, an angry Italian anarchist named Mario Buda stopped a horse-drawn wagon near lunchtime crowds on Wall Street in New York, just across the street from the headquarters of the J P Morgan bank. Inside the wagon were a hundred pounds of dynamite and five hundred pounds of heavy cast-iron sash weights. The wagon exploded on a timed detonator, sending the weights tearing through the air. The horse and wagon were blasted into small fragments. There were thirty-eight fatalities, most of whom died within moments of the blast – most were young people who worked as messengers, stenographers, clerks, and brokers. There were 143 seriously injured and hundreds more people less seriously injured.

As the first terrorist attack in modern society, Buda’s wagon established a ghastly set of precedents: in ordinary, day-to-day life, where large numbers of people gather, using something which simply disappears into the crowd to cause the maximum suffering, disruption and psychological damage. Mario Buda has spawned many imitators. There is a direct line from Buda to the appalling suicide attack on the Manchester Arena on Monday. Terrorism is intended, simply, to terrorise, launching its weapons in everyday settings – a crowded lunchtime in the city, a passenger airplane on a scheduled route, a commuter underground train, a pop concert on a Spring evening. It takes the ordinary, the routine, the normal and it makes it a place of horror and terror. It is intended to sow fear, uncertainty, distrust. The young, who tend to congregate in crowded urban spaces, are disproportionate victims. The sense of futility and waste is compounded at the potential unrealised, the futures erased, the opportunities wrecked.

On Monday evening, a good number of staff from across the University – accompanied by students – had travelled to London for the University’s reception at the House of Lords. Hosted by our Chancellor, the Lord Winston, we met more than two hundred Hallam alumni, friends and donors on a terrace overlooking the Thames. It was a glorious evening – bright spring sun, and it was a sheer delight to draw together the University’s past – its alumni, former vice-chancellors and staff – present, and future – students from across the University, and to watch them talk. As night fell, many of us climbed into a coach for the long drive back to Sheffield, so some of us began to pick up the news from Manchester on phones on the motorway. Slowly, the grim details emerged, and framed the contrast between an event which had celebrated community and shared endeavour and one designed to drive wedges into our society.

All terrorist attacks threaten more than life. We think – inevitably – that there but for chance we, or our children, our friends, our students, might have been; that plane, that concert. And this, of course, is what the terrorist wants us to think. If terrorist attacks strike at life and property, they are more potently aimed at something else – at the way we all think and choose to live. In the past week, in response to the attack at the Manchester Arena, we have seen protestations of defiance, of solidarity and community. And these do matter: these symbolic acts – whether in front of Manchester Town Hall on Tuesday evening or in the mass national moment of silent remembrance this morning, which we, also, marked in Hallam Square – matter. They are a way not simply of calling to mind the victims of terror, but of making the point that we are a community. 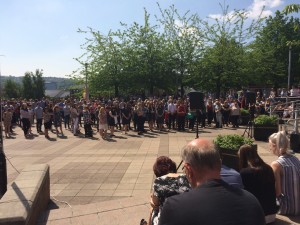 Our University community observing a minute’s silence to remember the victims of the Manchester attack.

Universities play an important role in society’s defences against attacks. They work with large numbers of young people. Through their teaching and their wider student activities they build communities, which cut across the divides of faith, class, creed, race and background. Through their teaching and research they subject ideas to critical scrutiny and debate. In a world which seems increasingly marked by division and distrust, they are important institutions. I’ve quoted before, and no doubt will do again, the great American social anthropologist Clifford Geertz, who put it like this: “The next necessary thing… is to enlarge the possibility of intelligible discourse between people quite different from one another in interest, outlook, wealth, and power, and yet contained in a world where tumbled as they are into endless connection, it is increasingly difficult to get out of each other’s way”.