Sheffield Hallam University film service began at the Arts campus located on Psalter Lane.  Two theatres were installed with 35mm projectors and manned by a small AV team.  Two of which were experienced projectionists; Melvin and Gilbert.  Melvin had worked in the projection booth at the Ritz Cinema in the early 1930s, a time where arc lamps were used and films was run though the projectors by hand.  Gilbert has a similar background.  The service was created to support the film studies and production courses but also a number of events were held there, including the first DocFest back in 1994. 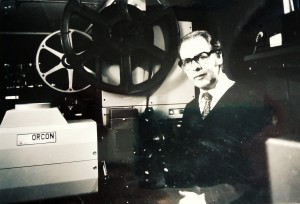 Former projectionist, Gilbert, beside one of our trusty Westrex 7000 35mm projector. 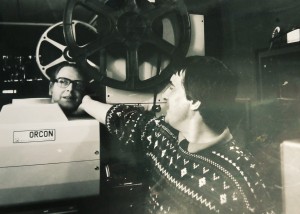 A tender moment between former projectionists Melvin and Gilbert.

In 2008, the Pslater Lane campus closed and the film courses moved to the city campus.  For a short period the film studies screenings were held in the Sheffield library theatre whilst the new facility at City Campus was located and installed.

There was some difficulty finding an appropriate space for a cinema but eventually an unused ‘void’ was identified.  After some debate, it was agreed to officially call the venue ‘The Void’.

Since then it has functioned as a venue not only for teaching but also for many special key events including DocFest, test screenings and preview screenings of feature films, with director Q&A afterwards.  Key academics have also encouraged community groups to use the space as a meeting points for associated screenings and discussions.