What is the degree awarding gap?

Here we provide an overview of the nature and context of the Degree Awarding Gap at Sheffield Hallam University.

What is the Degree Awarding Gap?

The Degree Awarding Gap, also known as the Degree Attainment Gap, refers to the difference in the proportion of one group receiving a first/2:1 compared with another group.

Research shows many factors can explain the difference in the final degree results for all students, including gender, socio-economic background and previous qualifications. However, when these factors are controlled, a gap based on the ethnicity still remains. The following image shows how Hallam compares to the national picture, click on the image to enlarge: 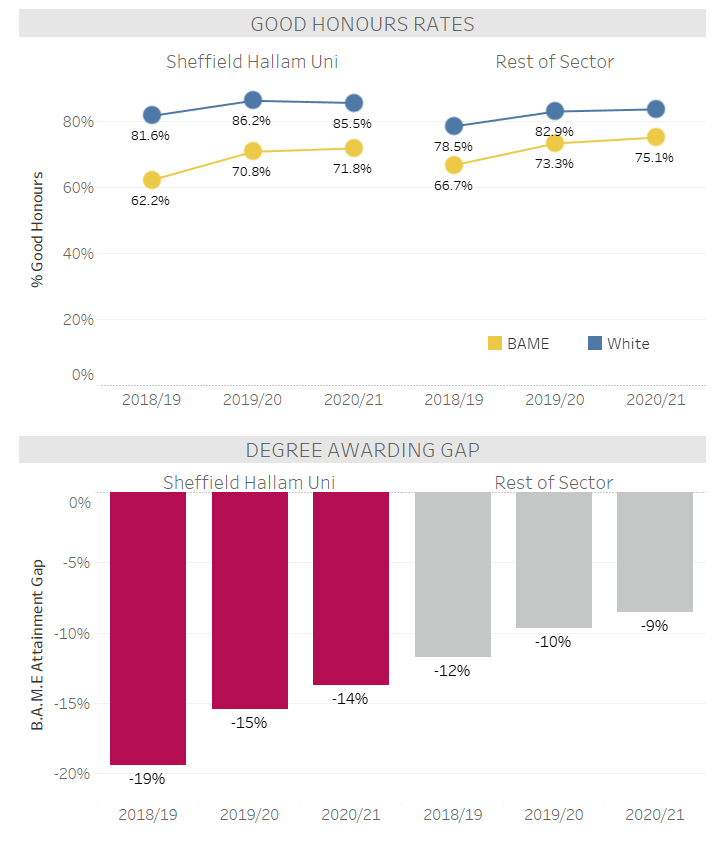 The attainment gap at Hallam is above the national average at 14 percentage points (2020/2021). For data at department and course level, access the BME Degree Awarding Gap Data dashboard hosted on The Source.

Why do we need to address the gap?

Addressing the degree awarding gap is a matter of social justice and fairness. In addition, if BME students are being disadvantaged by their university it is in contravention of the legal obligations for universities as set out in the Equality Act 2010 and the Race Relations (Amendment) Act 2000.

Perhaps more importantly there is a labour market premium attached to having a 1st or 2:1 as it can prohibit students from accessing certain jobs or careers. BME students already face significant discrimination in relation to access to and success in the workplace. In addition having a 1st or 2:1 is often a prerequisite to getting on to a post-graduate degree.

Why does the gap exist?

A number of research studies have been undertaken controlling for a wide range of other factors that might influence student outcomes. These have each concluded that even though the gap was reduced, ethnicity remains a significant factor.

As the Office for Students notes, ‘The differences in degree outcomes between ethnic groups persist even when controlling for other factors which may affect attainment  such as the student’s age, sex, course and qualifications on entry. Since the differences in outcomes cannot be explained by these common factors, this suggests that the cause of the under performance of BME students may be associated with other factors such as institutional structures and curriculum’.

In other words BME students face an ethnic penalty in higher education. You can read more about the attainment gap on The Ethnicity Attainment Gap: literature review – Miriam Miller University of Sheffield – April 2016. The cause of the gap is complex but can include:

Of course the degree awarding gap only measures final outcomes for students. However there are also differences in relation to access, retention and attainment at modular level.

You can also read the Causes of Differences in Student Outcomes, a report by Report to HEFCE by King’s College London, ARC Network and The University of Manchester by Anna Mountford-Zimdars, Duna Sabri, Joanne Moore, John Sanders, Steven Jones, and Louise Higham – July 2015.

The Hallam Approach features initiatives that our colleagues across our Colleges/Departments have undertaken to reduce the Degree Awarding Gap.