Tell us about your contribution that has been recognised through the professorship. 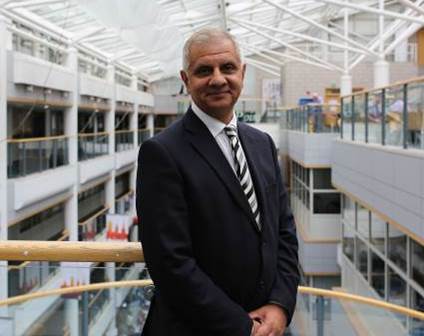 My application for a Chair was based on an outstanding contribution in External and Professional Engagement (E&PE) at Sheffield Hallam and in my previous career as a British Diplomat with The British Council working overseas and within the UK.

I recorded a number of achievements I was particularly proud of, including:

What does it mean personally to you to be a Professor at Sheffield Hallam?

The most important aspect is that it enables me to further mentor our students and our colleagues. It also provides useful credibility when seeking to establish relationships for influence for the University,

Tell us a bit about your career story so far.

I am a Barrister and former British Diplomat, with extensive experience of working for The British Council and other international organisations, including the UN and the Foreign and Commonwealth Office.

I am currently the Director of HKC where I have led a major change of our provision over the last 10 years focusing on developing a “rights based” agenda; a diversified and de-colonised curricula- and the delivery of applied pro-bono support to vulnerable groups within society through the implementation of applied student-led learning. Additionally, I have sought to establish HKC as a global centre for expertise in human rights and social justice.

For many years I worked with Government and non-governmental agencies all over the world; and the further and higher education sectors in a variety of different cultural settings. I have sought to bring that experience into my role at Hallam in seeking to build cross cultural competencies into our pedagogy and organisational culture.

If you could go back in time and give yourself some career advice, what would it be?

What’s next? Tell us about how you want to further develop your contribution.