I love books.  I always have two or three books on the go.  Always a novel, which tends to get read in bed.  I’ve just finished Melissa Harrison’s All Among the Barley, which opens as a pastoral idyll of England in the 1930s but darkens and deepens, with fascism more than in the background and a twist on the last few pages which changes your perception of the whole novel.  I’ve just started to (re-)read George Eliot’s The Mill on the Floss:  I grew up in Nuneaton, where Marian Evans, who wrote under the name George Eliot, was born. As a teenager, I thought that her novels were forbidding and inaccessible, so discovering them as an adult has been rewarding.   Perhaps, like some of the children’s books I read with our daughters, they are wasted on the young:  there are scenes in those which still reduce me to tears and helpless laughter.

I love books.  I’ll always have a non-fiction book on the go too, though not for under-the-duvet reading. The non-fiction books normally get taken on long train journeys, for turning to when I’m tired on the return leg.  I’ve just finished Richard Sennett’s book Building and Dwelling, which is subtitled – and about – ‘ethics for the city’. It’s about the relationship between the shape of cities, the way people live and how we deal with others in the city – with lots of fascinating asides and factoids tucked away. And I’ve just started Robert Caro’s Working.  Caro is an American journalist, who has devoted his working life to the biographies of two – frankly – unlikeable individuals: Robert Moses, who built and shaped modern New York for forty years until the end of the 1960s, and President Lyndon B. Johnson, who became President of the USA after the assassination of President Kennedy.  Caro’s now five-volume biography of Johnson is nearing completion, and in Working he explains how he goes about producing the books, still written out in longhand after months and years of detailed research.  They are not, really, about the individuals at all but about what really fascinates him: power and how it is exercised – which makes them universal.  Caro describes wanting to understand the impact of Moses on New York. For ‘One Mile’, a justly famous chapter of The Power Broker, he tracked down the individuals made homeless, and often destitute, by Moses’ determination to drive an expressway through one mile of urban neighbourhoods. He describes, also, dragging buckets from wells himself to understand something of the dreadful poverty Lyndon B. Johnson grew up in, without electricity or running water.

I love books.  And there’ll always be a book or two on the go for work.  Along with colleagues, I’m working on a pamphlet on the future shape of UK higher education, so I’ve re-read David Labaree’s book on the American university system called, descriptively, A Perfect Mess, and Michael Crow’s ambitiously assertive Designing The New American University.

I love books.  As Anthony Powell’s A Dance to the Music of Time novel has it, Books Do Furnish a Room, but they do much more than that.  Reading matters. It always has mattered: Alberto Manguel’s beguilingly subjective A History of Reading digs out the different ways people have read in different societies.  Reading, we know, enhances cognition at any age, and there’s also evidence that it builds empathetic understanding and wellbeing. It helps us understand ourselves and others better – even (or perhaps especially) those dense nineteenth century Russian novels exploring the depths of the soul. It matters socially too, in all sorts of societies – witness the huge popularity of book groups now, but also the reminder from Manguel’s history that reading was once a group activity. Hallam’s university leadership team has its own book group: once a month or so, we get together after work to discuss a book we’ve all read, unrelated to work. I’m sure it helps us work better together.

Our library at Sheffield Hallam is outstanding – according to National Student Survey evidence, it provides one of the best library services in the university sector.  It’s led by a great team who are currently planning for the Hallam Big Read.  This year the library team are organising an opportunity to welcome all this Autumn’s new students into the University by giving them a free copy of a novel. The hope is that many of the new 12,000 undergraduate and postgraduate students coming into the University for the first time in September 2019 will read the book and all have something in common that they can talk about, as they navigate their way through the early days of student life. It’s a programme that has worked well in other universities and there’s evidence that students value it. 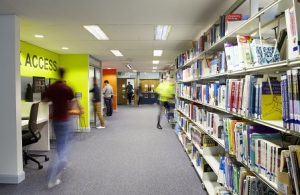 The National Student Survey tells us that our library service at Hallam is among the best in the sector.

The book chosen for this Autumn is Kit de Waal’s My Name is Leon. Kit de Waal came late to being a published novelist.  She worked in family and criminal law for many years, writing training manuals on fostering and adoption; she also grew up with a mother who fostered children. My Name is Leon is narrated by a child who is fostered.  I’m looking forward to reading it – it’s next on the novel pile, and I’ve agreed to write an introduction for the Hallam project this Autumn.  I hope you’ll join in the Hallam Big Read too.

Reading, of course, is central to university life. ‘Reading’ is the term we used to describe studying a subject at university – it’s still rather quaintly used in the introductions to students on University Challenge.  I know of one Vice-Chancellor who asks every candidate for a job at interview ‘what are you reading at the moment?”, and whilst that’s a perhaps forbidding challenge in an interview,  it’s good starter for conversations when I’m talking to people around the University. It almost always starts a conversation, and I often end it with ideas for things I should read.  As we head towards June, what will you be reading this summer?