We went to the cinema twice over the summer. The first time, my wife and a couple of my daughters took me to see Mamma Mia! Here We Go Again, the new film featuring the music of Abba. If you’ve seen it, I can reassure you that we won’t be re-designing our graduation ceremonies. If you haven’t seen it, ask someone who has. The film is two hours of escapist silliness, and none the worse for that. 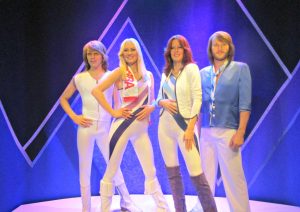 Abba, whose music inspired the soundtrack for Mamma Mia! Here We Go Again.

The second film we saw was The Guardians (Les Gardiennes), a new French film set on a farm in rural France at the end of the First World War. The men have been conscripted to fight, and so the running of the farm rests on the women, and the film explores what that means in an unhurried and wholly absorbing way. No plot spoilers to come, but the story unfolds over the two-and-a-half hours of the film, drawing you in and becoming completely compelling. The cinematography is superb and the film is sumptuously shot. When it ends, with a quite unexpected final scene, it leaves a host of questions unanswered and hanging. But one of the over-riding points the film makes is just how traditional – and now, therefore, remote – the everyday lives of the women seemed. Ploughing, threshing, butter-making, charcoal-producing – all done by hand. During the film, modernity begins to intrude – not just the war, but the arrival of a tractor which transforms the harvest. It’s a reminder that the modern world – the twentieth century world – arrived as the First World War ended – and was largely a result of the war.

As the First World War ended one hundred years ago, the first ever congregation of UK university vice-chancellors took place. The formation of the then Committee of Vice-Chancellors and College Principals, which became Universities UK in the 1990s, marked an important stage in the maturation of the university sector. Public funding – through the University Grants Committee – had just been introduced. This year, then, sees the one hundredth anniversary of Universities UK. And it takes place here at Sheffield Hallam University. A century ago Sheffield was also at the centre of higher education policy: the MP for Sheffield Hallam, H.A.L. Fisher, was the author of the 1918 Education Act, a milestone in education reform which began to expand tertiary education in England.

Over Tuesday and Wednesday this week we will be welcoming almost all the nation’s university leaders to Sheffield Hallam, with the conference largely centred on our stunning Hertha Ayrton STEM Centre. The agenda reflects the major pre-occupations of the sector: under the presidency of Dame Janet Beer, Vice-Chancellor at Liverpool University, it will be addressed by Philip Augur, who is leading the review of post-18 student funding, as well as by the minister for universities, Sam Gyimah MP; by Sir Michael Barber, the chair of the still-new regulator, the Office for Students; and by Sir John Kingman from UK Research and Innovation (UKRI). A session led by Rachel Wolf will reflect on the continuing work of the Civic University Commission, chaired by Sheffield Hallam’s board chair, Lord Kerslake, which is looking at the civic and public role of the university. The conference will look at international developments in funding, regulation and participation, with contributions from the leaders of the American and Australian associations of universities. It will look at student mental health and wellbeing, at student retention and continuation, at employment and the changing graduate labour market.

I’m obviously delighted that we are able to hold this Universities UK conference, a hundred years after the first formal meeting, at Sheffield Hallam, and that as a result the focus of the sector will be on this university for two days at the very beginning of the academic year. It’s an opportunity for us to showcase some of what we do: the investment in science and technology which the Hertha Ayrton centre represents, the importance of the University to the city and the region, and the engagement of the University with all the big current questions in the sector. I also know, because it is what I do whenever I go to a Universities UK conference in another university, or indeed visit any other university, that every other vice-chancellor will be compiling a little mental checklist of things which impress about this university. I’ve been proud of the joint work of our facilities, conferencing and communications teams over the summer to prepare for the conference.

The higher education world of the second decade of the twenty-first century is transformed from that of the second decade of the twentieth century. The university sector is more diverse. It is bigger. Universities are more complex organisations. They are more important to more people than they were in 1918. But the modern university world was essentially born in 1918, just as the agricultural world depicted in The Guardians was transformed by the arrival of modernity. It was then that debates about funding, about participation and about the relationships between universities, society and the economy took their recognisably contemporary form. I am delighted that in 2018, Sheffield Hallam University provides the forum for the beginning of the next hundred years of development.