You might know the source of this little joke, which is not, I’m afraid, original.   It’s from a graduation – or commencement, as they call it in the United States – address given by the author David Foster Wallace in 2005.  Thanks to the wonders of technology, you can find it on YouTube; it’s been described as the best commencement address ever given. But, again thanks to the wonders of technology, there are plenty online to see and I think others are better:  Ann Patchett’s has been published, in a well-worth-re-reading book, under the title What Now?; it’s exactly as good as you’d expect from the intelligent and assured author of Bel Canto, and State of Wonder. Aaron Sorkin’s crams in any number of lines from his own The West Wing scripts, which makes it by turns banal and soaringly inspirational.  As with so many things, the Americans do graduation (commencement) differently:  they may, in a perhaps stereotypically American way take it all a bit too pompously, but they understand that it is important. It’s important for the university, as it is one of the great markers of the sequence of the academic year; important for the graduands, for whom this is a rite of passage and a moment to say au revoir to friends and tutors;  and perhaps most important of all for families, swelling with pride and – I speak from experience – wondering how the years flew by.

Monday marks the start of Hallam’s 2017 graduation fortnight. Over the next two weeks, 7,435 graduates will be attending one of our twenty ceremonies.  There will be an audience of 26,675 families and friends:  unlike some universities, we do not limit family tickets to one or two per graduand, which makes this a beautifully community celebration, and just as it should be. 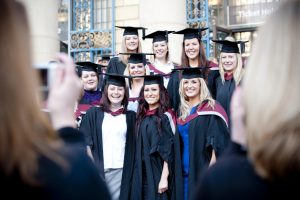 7,435 graduates will be attending one of our 20 ceremonies over the fortnight

It’s important that we do graduation well.  There’ll be eighty Hallam staff working at each ceremony, and, as you might guess, there’s a huge logistic challenge in making the ceremonies work – from effective ticketing arrangements, through the dressing of the City Hall stage down to – these details really do matter – checking the lay of each graduand’s gown before they come up to and across the stage. The graduation ceremony is a stage show, and like all great shows, it requires attention to precise details and the big picture.  For everyone in the audience, the performance ceremony they are seeing is the only important one: it has to go well.  We may be graduating large numbers of students, but for each of those, only one really matters. Anyone wanting to view the livestream of ceremonies can visit this page.

Although graduation is the culmination of study, we hope that it will not be a farewell for our graduates.  Our Development & Alumni Relations team will be laying the foundations for a continuing relationship with our alumni, including the Graduate Support Programme managed through DEEP for 2016/2017 graduates offering wider careers support, postgraduate study options and self-employment support.  Our alumni network is now over 200,000 strong, and we are delighted to retain contact with our former students: their stories are important to us.

As with the previous two years, there are free instant photos for our staff and graduates who post their graduation and prize-giving pictures to Twitter and Instagram with #WeAreHallam. This has been hugely successful in the past and uses SquareShare, the award-winning business of Hallam alumnus Tom Stayte; last year we printed over 5,500 photos over the fortnight.   One of the highlights I’m looking forward to is the Class of 2017 graduation film which will be shown before each ceremony and shared across social media.   Last year’s film was just stunning – a huge success with everyone who saw it, and regarded as being of outstanding quality by some very seasoned media professionals.  This year’s film is directed and produced by current students Joe Georgiou, Ed Brooks, James Howe and Eddie Weller, who have just started their third year BA Film and Media Production course; you can watch it for yourself on this page.

The point of the fish story is that the most obvious, important realities are often the ones that are hardest to see and talk about.  It’s easy to take graduation for granted – after all, teaching and research across the University will not stop for the next two weeks – but we shouldn’t ever take the success and hard work it recognises for granted. It’s important that we celebrate as a university, with our students and with their friends and families.