There’s a probably interminable debate about what universities are for, which provides a backdrop to working in them.  The historian Felipe Fernandez-Armesto covered virtually all the bases in a piece he wrote in 2011: “there are only two worthwhile objectives for everything we do, in the university and out of it: enhancing life and preparing for death”, although, so far as I know, no-one has ever tried to design a university leadership structure on these two principles.   In fact, of course, universities are about lots of things simultaneously – the clue is in the first three syllables. They have proved remarkably successful over time at fulfilling a range of different, often competing functions.  But they’ve always prepared young people for the world of work in all its forms and variety.  I’ve said before that when I came for interview at Sheffield Hallam, one of the things which attracted me immediately was the centrality of the careers and employability centre at the core of City Campus.

Over the last year, a huge amount has been done to extend the work the university is doing to ensure that our students, whatever their subject, are as well-prepared as possible to move from their studies to rewarding and worthwhile careers.  It’s work which has been given added focus nationally through the release of the LEO dataset.  Civil servants, many economists and policy makers are extremely excited about the Longitudinal Education Outcomes data, which links HMRC and DfE data to map progression into employment and earnings by individuals.  The first release of data caused a variety of comment on earnings and employment outcomes for different subjects and different institutions, and for the continuing impact of social background on long-term outcomes.  But the core lesson is clear: progression to employment matters for individuals, and universities which are serious about their obligations to their students, as we are, need to take it seriously. LEO has now been incorporated into the Teaching Excellence Framework as a supplementary metric. 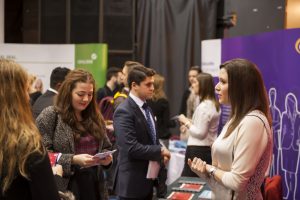 We know that the graduate labour market is changing fast, with sharp differences regionally and by sector.  The Association of Graduate Recruiters publishes an annual survey of both larger graduate recruiters and smaller employers.    The average graduate starting salary for 2015/16 Hallam graduates in professional and managerial employment in Sheffield City Region was £22,021, and £22,080 nationally. Starting salaries are much higher in sectors where there are significant skills shortages, e.g. IT & Telecommunications, with the AGR reported a median starting salary of £29,000 per annum. Institutional comparisons are difficult to make because the subject mix in institutions has a large impact on graduate starting salaries; the first LEO data release suggested that Sheffield Hallam did extremely well on employment rate but rather less well for the percentage of graduates above median earnings. There’s some evidence that Hallam graduates who had completed an extended placement earned just over £3000 more than those who did not – which suggests that, setting aside subject mix and regional labour market issues, experience whilst a student has a positive impact on outcomes.

There is an ambitious employability plan which has been developed through the Shaping Futures Board, with an emphasis on ‘Better Prepared Students’, ‘More and Better Jobs’ and ‘Innovative and Applied Curriculum’.  Last week, along with colleagues from across the University, I spent time at the Sheffield Chamber of Commerce’s first ‘Connect Sheffield’ conference, drawing together SMEs from across the region on building better links with the University. The Hallam Careers Fair draws together some of this work, seeking to take forward our work on ‘Better Prepared Students’ and ‘More and Better Jobs’.  There are 140 employers coming to The Hallam Careers Fair next Thursday the 26th October to recruit Sheffield Hallam students from all degree disciplines for placements, summer internships and graduate roles. That includes companies such as Jet2, Boots UK, BBraun, Asda, IBM, DHL, Dixons, Fujitsu, GE, HMRC, South Yorkshire Police, JCB, Engie, Dunelm, Fragomen, 3Squared and a wide array of SMEs from across the region. The 2017, new Hallam Careers Fair is zoned across the university from Cantor and the Careers and Employability Centre to the new Hertha Ayrton Centre.  The zones are there to guide students to their interest areas but the Fair is also encouraging students to open their minds to a wide range of employers who are here to meet and recruit them: do please encourage students not only to participate in the Fair but to look widely across the companies who are here.

University is not simply about preparation for work – of course.  But if we are serious about setting our students up to succeed, then institutional action on employability matters, and it may matter all the more for students who enter higher education without the advantages of family, networks or prior experience which some have.  Giving students the tools and experiences to succeed is a matter of social justice. This year’s Careers Fair is one simply strand in the plan.

This week is also Sheffield Design Week – a festival of design, art, technology, architecture and performances taking in exhibitions, talks, workshops, open studios and lectures.  It is a collaborative platform supported by the Sheffield Institute of Arts (SIA) playing host to an array of local, regional, national and international design, architectural and creative names. The festival kicks off today with a pop-up design studio led by SIA’s MA Design course outside Sheffield station, looking at designing the future of the city; do try to get along