You don’t have to be a football fan to remember it. In the 1990 World Cup semi-final England played West Germany. The game was even after extra time and went to a penalty shoot-out. The Germans dispatched all of their penalties but Chris Waddle blazed the final spot-kick over the bar to seal England’s fate. It turns out that there are pretty good statistics on this, and I owe them to Tom Russell in the University’s Strategic Planning and Intelligence team. 81.2 per cent of those taking penalties that would win the shoot-out for their country score while the figure for those needing to score to stay in the competition drops to just a 14.2 per cent success rate — the average success rate being 68.9 per cent. The gap is staggering. The lesson seems to be that footballers – and probably others — respond positively to situations in which people know what they can do will make a positive difference.

Universities have some obvious levers to make a positive difference, and teaching is one of the most powerful. Successful teaching contributes fabulously to universities’ ability to shape  students’ futures – engaging them in powerful learning, putting them on trajectories to academic and professional success. At the moment, the National Student Survey, despite its many flaws and challenges, is one of the few tools available benchmark teaching performance against peers. It is, of course, a measure of satisfaction rather than of quality, but tucked away in its twenty-two questions, and the almost 5000 responses which the 2016 survey attracted at Hallam, are some powerful messages about teaching in the university.

The first, which I have pointed out before – and am delighted to point out again – is that across the university, in every faculty, there is simply superb provision. The university scored 100% satisfaction in five NSS course codes and more than 90% satisfaction in thirteen course codes. Across a three-year degree programme, these are remarkable results. Satisfaction data with government services around the world shows that it is extremely difficult to top 90%. Across the university, we know what success looks like and how to achieve it. 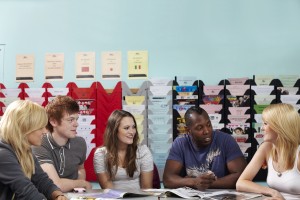 But, again as I’ve written before, the university as a whole slipped back by one percentage point between 2015 and 2016, and some of our courses saw sharp falls in student satisfaction. We now know a good deal more about why thanks to detailed analysis of the results by Neil McKay, Dean of Students and his team in STEER. That tells us some powerful messages which we need to address, notably about assessment and feedback. But, not least as we head towards the 2017 survey, there are also some strong messages which teaching teams can use to supplement their action plans for improvement. Students do not like the abuse of PowerPoint presentations. They object to feedback which is not timely, or which does not give them sufficiently specific guidance on how to improve. They do not like absence of response to email queries. Actually, of course, I’ve written each of these wrongly – consistent with the message from the football penalty data — I should say that students respond positively to engaged and engaging teaching, to timely feedback, to specific guidance on how to do better, to effective responses to queries.

Over the last three years, a huge amount of work in faculties and departments has gone into responding to the NSS and enhancing student experience. It’s important now that absolutely everyone is engaged in this if we are to root out inconsistencies and swings in scores. I know just how hard this work is.  Improvement is tough.  But it is of paramount importance and I am committed to supporting staff across the university who are generating improvement and enhancing the quality of teaching.

The university has in place everything we need to make a significant and sustained difference: an outstanding dataset; a clear institutional approach to action planning, exemplars, across the university, of what sustained high performance looks like; from 1 November, new leadership for student experience in the person of Professor Christina Hughes, Pro Vice-Chancellor for Student Experience, working with superb PVC deans. Effective use of data, setting clear targets, developing precise action plans and ensuring that strong leadership delivers them – all these things help to focus on the things which matter most. But so does learning the lessons from what students say contributes to great teaching, and that is something to which we can all make a successful difference.

One thought on “Improving teaching: what’s to learn from getting the ball into the net”