Winston Churchill called it his ‘black dog’. Stephen Fry has spoken openly about his suicide attempts in 1995 and 2012. J.K. Rowling has written about how her experiences of depression shaped her descriptions of the soul-sucking Dementors introduced in the third Harry Potter book. These accounts – increasingly familiar to us – are simply well-known examples of something much more widespread. The estimate is that one in six of us will encounter mental health challenges in any one year. And the report published by the Higher Education Policy Institute a few weeks ago suggested that students are less happy and more anxious than the general population, including other young people, with a significant minority suffering from serious mental disorders. Sir Anthony Seldon, Vice-Chancellor at the private University of Buckingham, has recently written starkly of “a crisis, which is growing each year, in student mental health in our universities”. Today – 10 October – is World Mental Health Day.

One of the challenges of understanding, and actively addressing, the issues of mental health and wellbeing in universities is something I wrote about a few weeks ago: the start of a new term, and new year, feels a moment full of opportunity and possibility. How, we wonder – if only sub-consciously – can the figures reported by the NUS, the ‘epidemic’ of mental health challenges, be squared with the story we want to tell of opportunity and potential? But shift the lens and there is another way of framing this. It is stressful to live away from home without access to past support networks, while learning in new ways, taking on large costs and facing what seems like an uncertain future. Last year, report the NUS, as many as four in five students experienced mental health issues, with a third having suicidal thoughts. At Sheffield Hallam there has been a marked rise in the number of applicants disclosing mental health as a disability; in the number of students presenting to support services with anxiety or depression; and in the number of students citing stress as a factor in the difficulties they are facing in trying to study effectively. Students will not be able to learn effectively if they are struggling with mental health issues. There are also obvious institutional benefits of proactively addressing the issue: put crudely, it simply absorbs more staff resource to respond to problems than it does to anticipate them, whilst improvements in retention and progression make sense for everyone. And whilst it’s important that we should prioritise student wellbeing, our staff will not be as effective as they could be if we are not, also, a healthy workplace.

At Sheffield Hallam, there is considerable work underway. The University and the Students’ Union each made a commitment to tackling mental health stigma on World Mental Health Day in October 2014 by signing ‘Time to Change’ pledges. The plaques for this are displayed in main reception areas around the campus. Now, the Healthy Hallam (#healthyhallam) idea was introduced by the Students’ Union Welfare and Community Officer in 2015/16 to promote a week of SU-led activities focused on health and wellbeing. Such was the success of that week that it was agreed that we develop the programme more broadly across the University, and it is now jointly led by Claire Gandy, Head of Student Support Services and Davey Silver, SU Welfare and Community Officer. The programme is based around the ‘five ways to wellbeing’: Connect, Be Active, Keep Learning, Take Notice and Give. This approach has benefits for individuals’ psychological and physical health and is widely promoted by mental health organisations such as Mind; at its core is a recognition that mental illness is not simply something which happens to others, but that mental wellbeing is a priority for everyone. Members of the University and Students’ Union Officers are each championing one of the five ways with the aim of engaging as many students as possible; there is more information at https://blogs.shu.ac.uk/healthyhallam/. Our staff wellbeing site offers support to colleagues for looking after all aspects of their wellbeing, and that of their teams. 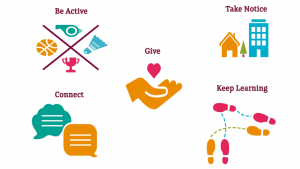 The five ways to wellbeing

Beyond the Healthy Hallam work, Sheffield Hallam is part of the UK National Healthy Universities Network. The definition of a Healthy University used by the network is that “a Healthy University aspires to create a learning environment and organisational culture that enhances the health, wellbeing and sustainability of its community and enables people to achieve their full potential”. The University has developed a strategy to develop a whole university approach to health and wellbeing which covers everyone in the University community. This work is being led by the Healthy University Steering Group, a cross-University group with representatives drawn from the University and the Students’ Union, and chaired by Mark Swales, Director of Estates and Facilities. But everyone has a part to play in this work, from knowing about the ‘five ways to wellbeing’ (on the Healthy Hallam blog), through to encouraging students to engage, or providing active links to the programme through routine engagements with students and colleagues. As we all know from other areas of our lives, small changes in behaviour matter a lot.

No university which claims to have developed a wholly comprehensive approach should be believed: the challenges within universities are as much a consequence of the world in which we operate as of our approaches. But we can make a difference – for our students, our colleagues and ourselves. At the simplest, we can acknowledge the challenges, and listen hard to those around us.

One thought on “Minds matter”