The French Emperor Napoleon, or it may have been Frederick the Great of Prussia, famously commented that “an army marches on its stomach”. A Clearing operation is sustained by bacon and sausage sandwiches. By 7am last Thursday, thirty minutes after the Hallam Clearing and Adjustment lines had opened, the food outlet in the Owen Building was supplying our staff and student teams with their breakfast. Healthier fruit was waiting for them in the suites of rooms, all of which were buzzing with activity. By 9am, our front line teams had answered over 1400 telephone calls, working to a tight script, taking down a rapid personal history from enquirers, logging it onto a common database and passing those who met our baseline entry criteria onto admissions teams. The superbly-managed operation, which saw over 200 staff and students on site from soon after 6am, was the result of months of careful planning, drawing together our recruitment, admissions, planning, marketing, media, digital services, catering and academic teams. Even given the early hour, there was a fantastic team spirit, which made it a real pleasure to be there. 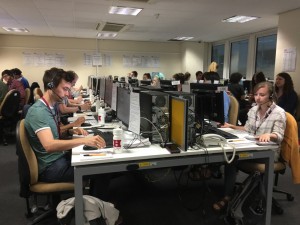 One of the Clearing call rooms at Hallam.

By lunchtime, Hallam had taken almost 3000 calls, and the bacon and sausage sandwiches had been replaced by chocolate biscuits. Alongside the telephone operation were activities on Facebook, Twitter, Snapchat and Instagram: twenty-first century A-level students interact with the world through social media. Every student who talked to us had a set of examination grades, but behind that, a story. The job of our teams was to work out whether Hallam can help them write the next chapter in their story successfully. I listened to a Biosciences tutor explaining patiently to an upset student why she didn’t meet our criteria for direct entry but could come via a foundation year: student interests at the heart of it and done with real sensitivity and skill. And that was, essentially, repeated hundreds of times.

By the end of the day, our student and staff teams had answered a phenomenal 4282 telephone calls – 5% more than in 2015. Something over 850 offers had been made to students, all of whom had real strength and potential but whose A-level results had – for better or worse – not quite been what they were expecting. A further 1000 calls had been taken by the Confirmation and Accommodation teams. It’s easy to think about all this in terms of numbers: numbers of phone calls, average response time (about 10 seconds, with a maximum wait time for any caller of two minutes!), grades, recruitment numbers. Throughout the week, the University’s Recruitment Board, which I chaired, met every day and sometimes more than once a day, looking at data and trends and making decisions about next steps including the impacts of patterns across the University on timetabling and staffing. Our marketing and communications teams fed back information from the University’s outstanding social media presence and from competitor activity. It was a huge collaborative venture.

Across the country, the numbers are remarkable. In all, something like 40,000 students – or 10% of all new undergraduates – now come into higher education through Clearing or Adjustment. The figure at Hallam looks to be very slightly higher than that at about 12%; at some other regional universities it is 25%. Hallam operates in an increasingly competitive higher education market in which all universities need to work ever harder to secure their student numbers. But at root it’s not about numbers: it is about changing the lives of young people- talking to them and understanding if, where and how we at Hallam can help them achieve their ambitions by giving them opportunities on which they can thrive. That makes it all worth getting out of bed (very) early for.

Everyone’s attention focuses on results day. But Clearing and Adjustment is not a one-day event. It is part of a long and complex admissions and recruitment process. Our phone lines opened again at 7am on Friday morning, though the numbers were much lower – just 15 people on the line at 7.15am, and about 800 over the day. Even so, moving beyond the offer of a place demands further work to ensure that students are in possession of all that they need to accept the place and then to enrol. By Friday morning, a major task involved sorting and filing the piles and piles of yellow forms which had tracked the thousands of conversations.

The Recruitment Board met later on Friday morning. Many courses were now closed and data from the University and UCAS, plugged into a predictive model of great sophistication, allowed us to make judgements about the outcomes of Clearing, which we reviewed again on Friday afternoon. Even so, Clearing has not ended. The process continued through the weekend, including an important Open Day, and on towards enrolment. But the major operation of results day was complete. Early on Friday evening, I was in scruffy clothes lugging some garden rubbish into bins. An admissions tutor from Natural and Built Environment walked past, on his way to the local pub, and we swapped experiences of the two days: there are some times when the bacon sandwiches just won’t do.