John Gottman researches marital relationships. After analysing a normal conversation between a husband and wife for an hour, Gottman can predict whether that couple will still be married in 15 years with 95% accuracy. If he analyses them for 15 minutes, his accuracy is around 90%. But if he analyses them for only three minutes, he can still predict with high accuracy who will get divorced and who will stay together. Malcolm Gladwell quotes Gottman in his best-selling popular psychology book, Blink. Gladwell celebrates moments of intuition, and their power to enable us – as he puts it – to ‘think without thinking’. I’ve been here now for two terms – just over half of the year. I’m still routinely asked by people what I make of the University. I like to believe that my first impressions hold true: a university with striking success, huge potential and outstanding people, a university which is in good shape but has huge potential. Those first impressions are, of course, very powerful.

But Gladwell has his critics, notably Daniel Kahneman, whose book Thinking Fast and Slow is one of my favourite books. Kahneman, a Nobel prizewinner, offers a different account, which celebrates rationality over intuition. He comments that Gladwell “created in the public arenas the impression that intuition is magical…That belief is false.” Kahneman talks about the way the brain operates using two different systems. System 1 is fast, instinctive, automatic, frequent, emotional and subconscious. Its power to shape perceptions gets us out of any number of sticky situations, but it can be misleading, fooled by emotional reactions and shaping thing starkly. System 2 is different. It is slow, logical, calculating and conscious and it takes a huge effort to unpack situations in ways which understand interconnections. If you haven’t already chosen your summer reading, Kahneman is a good pick.

Over the past six months, I’ve been trying to move towards a Kahneman-approved approach to shaping the way the University needs to develop, and that’s been set out in several blogs – thinking aloud in public. Over the summer, working together with the small team who are shaping the new strategy document with me, we will be producing a document which will be the basis for consultation in the Autumn.

Other people important to the University will be working in different ways over the summer. The recruitment and admissions team will be gearing up for confirmation and clearing: that process, around the publication of A-level results on 18 August, which is so important to this and every other university. The process has become more complicated over recent years as ‘confirmation’ becomes as important as ‘clearing’: students using their secured A-level grades to reconsider their options. As the university system gets used to operating in a system where numbers are not controlled nationally, so the dynamics of this part of the admissions process change. I’m incredibly impressed by our recruitment team who have been meeting me every fortnight to explore the University’s position. During confirmation and clearing we will be meeting every day. 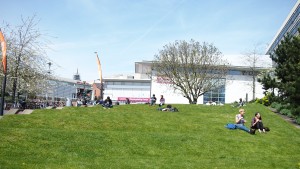 The registry and facilities teams will be mapping out plans for welcoming more than 7000 new students to the University in the Autumn: a massive logistical and planning process in which any number of things have to go right at the same time so that new students – whether they hail from a few miles away or several time zones distant – feel as welcome and valued immediately as I was six months ago. Their impressions will veer towards Kahneman’s system 1.

Max Litchfield, a Hallam student who won the British 400m individual medley in Glasgow in April, will have a busy, and memorable summer, representing Team GB at the Rio Olympics. We will be cheering Max on!

And there are other people whose decisions and activities will impact on the University. I’m running out of adjectives to describe the political landscape. However, one of the changes which happened last week was the ministerial responsibility for universities moved from the Department of Business, Innovation and Skills to the Department for Education. Universities were within the Education Department until about a decade ago, when a separate ministry was established (it’s more complicated than that, but an entire blog would be needed to explain it). This might sound like a piece of Whitehall chair-moving, but it has some significance. Although responsibilities for universities moved to DFE, the science and research budgets remained in the [new] BEIS department. This separation of teaching and research budgets – hitherto both have been administered through HEFCE – will have big implications for universities, with potentially different accountability streams. It’s a detail in what has been a momentous few weeks, but one to which we will need to respond.

For now, though, this is the final blog of the academic year. I’ll write a note following confirmation and clearing, but the weekly blogs will resume in September. Whatever your summer plans, I hope you have the summer you would want to have – restful or challenging, lazy or energetic, system 1 or system 2.