The English author and critic Simon Gray had a pretty caustic view of his university experiences.  “I wrote all my papers”, he claimed, “with a fraudulent fluency that could only have taken in those who were bound by their own educations to honour a fluent fraud”.  Others, of course, have a nobler view of what universities do for individuals and society.  One of the most influential strands in the endless debate about what universities are for is that associated with the great Anglo-Catholic thinker John Henry Newman, in The Idea of a University.  Writing at a time when university education was the preserve of a tiny, and male, elite,  Newman’s view was that “a university training is the great ordinary means to a great but ordinary end; it aims at raising the intellectual tone of society”.  If, he somewhat reluctantly conceded “a practical end must be assigned to a University course”, then “it is that of training good members of society… It is the education which gives a man a clear, conscious view of their own opinions and judgements, a truth in developing them, an eloquence in expressing them, and a force in urging them”.

A good deal of attention last week was attracted by a paper published through the Institute for Fiscal Studies (IFS) which took a very different view. “How English domiciled graduate earnings vary with gender, institution attended, subject and socioeconomic background”, by my own former colleagues Anna Vignoles and Lorraine Dearden, together with Neil Shephard and Jack Britton, is a serious piece of analysis.  For the first time, the authors are able to use HMRC data on earnings and Student Loans Company administrative data to explore the ways in which family background, institution attended and subject studied impact on earnings.  Their summary, and overwhelming finding, is that “students from higher income families have median earnings which are around 25% more than those from lower income families”. There are marked variations by subject, so that “Medicine, Economics, Law, Mathematics and Business deliver substantial premiums over typical graduates, while disappointingly, Creative Arts delivers earnings which are roughly typical of non-graduates”, and there are considerable variation in earnings across different institutions.  It turns out that there is, of course, massive interaction between the subject mix and the institution attended, which – certainly on my own reading of what is a technically impressive paper – the authors have not quite bottomed out.  So the LSE (one of just seventeen universities named in the paper) appears to do extremely well for its graduates, but is flattered by the fact that it does not offer any programmes in creative arts.  Moreover, although the paper offers a clear account of the associations between subject, institution, family background and earnings, it is not strictly longitudinal:  whilst it demonstrates that those with creative arts degrees have relatively low earnings, it does not, for those individuals, demonstrate what their earnings might have been without the degree. 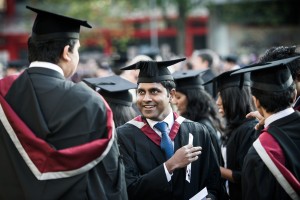 Other news items last week threw the report into sharp relief. Bob Dudley, the global CEO of BP was awarded a salary of £14m.  Since you might be wondering, Dudley graduated in chemical engineering from the University of Illinois, but went on to two Masters degrees, one from the wonderfully-named Thunderbird School of Global Management at Arizona State University and one from the Southern Methodist University in Dallas.  A weakness of the IFS paper is that it doesn’t explore the impact of Masters degrees – increasingly a differentiator in a competitive graduate labour market.   Earnings returns from MBAs skew the data on returns from Masters-level study, but they also make some of the first degree data less reliable than it would otherwise be. Elsewhere, a French couple opened a dusty loft and appear to have found a long-lost Caravaggio, valued (though this is not much use to Caravaggio) at €120m.  How many of us have wondered about our lofts as a result?  Caravaggio, of course, died on the run and almost penniless in 1610, a fate which suggests he might not have even made it onto the HMRC database.  The artist dying penniless is a familiar enough fate – Rembrandt, Vermeer, Toulouse-Lautrec, Modigliani, van Gogh for starters – but it does not seem to put them off. Or perhaps it does: who knows what the BP CEO might have produced if he had not found his way to the  Thunderbird School of Global Management.

Press coverage of the IFS report largely picked up on the continuing connections between earnings and parental income, which is a feature not just of England but of almost every other advanced society.  In that context, their conclusion that “once we control for institution attended and subject chosen, this premium falls to around 10%” suggests something rather more positive: that attending university and graduating with a degree is a positive force for reducing what the Nobel prize-winning economist James Meade lambasted a generation ago as “the inheritance of inequalities”.  Neil Shephard, a distinguished statistician who now works at Harvard, is associated with the view that there is a case for looking at loan repayment rates on an institution-level basis, but it seems to me that the considerable impact of family background demonstrated in this paper weakens rather than strengthens that case.

There is a huge amount of policy-relevant work here.  Universities have great responsibilities – to individuals, to employers and to society: I’ve already written, in a previous blog, that universities are one of society’s major tools for creating opportunity by extending the possibilities of higher education.  But my conclusion from the IFS report is that this, on its own, is not enough:  universities can also, and do, entrench inherited inequality.  All that means that the task of widening participation in higher education – at which Sheffield Hallam excels through its student recruitment and outreach activities– is only part of the picture.  Earnings trajectories are not everything, as all those penniless geniuses remind us; but, in an age in which students eventually bear the costs of their higher education through loan repayments, we have an obligation to educate, in the Newman sense, and to provide the skills and support which will lead to rewarding employment.