Off the Shelf 2019: Sheffield Hallam Events

Zadie Smith and Robert MacFarlane Kick Off, Off the Shelf

We’re excited to open Off the Shelf with an evening with bestselling, multi-award-winning author Zadie Smith, in association with Penguin Live. Join Zadie on 3 October 7:30pm at City Hall for a live podcast recording of Literary Friction to discuss her first-ever short story collection, Grand Union. 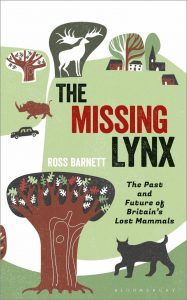 Join palaeontologist Ross Barnett at The Dorothy Fleming Lecture Theatre, on Saturday 5 October as he discusses his new book, The Missing Lynx: The Past and Future of Britain’s Lost Mammals. Britain’s lynx have been missing for more than 1,000 years. Only 15,000 years ago Britain was home to lions, lynx, bears, wolves, bison but as the climate changed and human populations expanded most of the British megafauna disappeared. Will we ever be able to bring these mammals back? And if it’s possible, should we? Join Ross as he uses new fossil discoveries, biomolecular evidence and more to paint a fascinating picture of these lost species.

Award-winning journalist, Tim Smedley joins us to tell the full story of air pollution on Sun, 6 October, at The Foundry, University of Sheffield Students’ Union. Amidst terrifying statistics, Tim uncovers the hope that remains for the planet with inspiring stories of how cities like Mexico City have reduced pollution. He meets people trying to make lasting change and outlines how everyone can improve the situation.

Film Studies at SHU are curating a series of three films as part of Off the Shelf this year to mark three key strands of the festival, ‘Working Class Voices’ curated by University of Sheffield, ‘Environment’ curated by Sheffield Hallam University, and international strand celebrating the Norwegian Year of Reading.

The free screenings take place in the Void Cinema on Sunday afternoons at 4:30pm throughout the three weeks of the festival.

Shelagh Delaney’s A Taste of Honey is an important film of its time and one that remains surprisingly relevant to contemporary society. Sunday 6 October, 4:30pm.

Living in the Future’s Past (2018) is a thoughtful documentary manifesto in which Jeff Bridges reflects on the state of our planet and the influence of humankind. Sun 13 October, 4:30pm. Introduced by John Grant.

Insomnia (1997) is one the earliest examples of Nordic Noir and uses the police procedural to paint a bleak picture of human nature. Introduced by Martin Carter, Principal Lecturer in Film Studies to celebrate the Norwegian Year of Reading. Sun, 20 October, 4:30pm 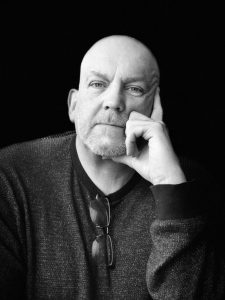 John Godber expresses the culture and concerns of the northern working class through plays that have huge popular appeal. September in the Rain, one of Godber’s personal favourites, is a gently, lyrical comedy that looks back across a lifetime of family holidays spent in Blackpool. Join us for a blistering performance of September in the Rain by our talented alumni and students (8, 9, 10 October), reflecting on his life, influences and work, in conversation with Neil Sissons who is a theatre director and his long-time collaborator.

Join Peter Fiennes author of Footnotes: A Journey Round Britain in the Company of Great Writers, In Conversation with Dr Charles Mundye 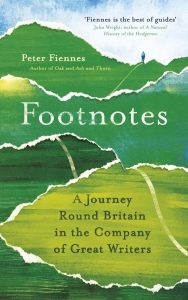 A unique exploration of Britain in the footsteps of some of our greatest writers, tracing paths recorded in their books and journals and looking for the country they once knew. Peter joins Enid Blyton on the Isle of Purbeck, Dickens on Gad’s Hill, Johnson and Boswell in Edinburgh and Skye, Beryl Bainbridge and JB Priestly across the North alongside many more. Blending travel writing, history and biography Footnotes is a fascinating quest to discover Britain anew. Thursday 10 October, the Cadman Room, Millennium Gallery

Join us for Another Journey into Wild Places as part of our Off the Shelf Environment Strand, with Dan Richards, author of Outpost. 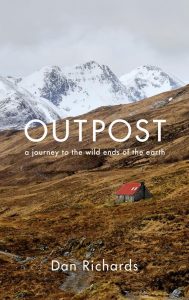 There are still wild places out there on our crowded planet. Through a series of journeys from Scotland to Svalbard, Dan Richards explores the appeal of far-flung outposts in mountains, tundra, forests, oceans and deserts. Such places have long drawn the adventurous and inspired writers, artists and musicians. Join Dan at the The Dorothy Fleming Lecture Theatre, Charles Street on Friday 11 October as he explores why we are drawn to wilderness, what can we do to protect these places, and what the future holds for outposts on the edge.

In the summer of 2019 the term ‘climate emergency’ blazed across numerous headlines across British mainstream media. In this workshop you will work with Forestry Commission Writer-In-Residence, Zakiya Mackenzie and write your own piece that centres you as the character being challenged to respond to climate change.

Back in the Day: Creative Writing Workshop with Yvonne Battle-Felton.This workshop uses the past to inspire the creation of historically influenced fiction. Through interactive-writing exercises inspired by pictures, newspaper headlines and events, you will learn how to develop character, setting, and place. Yvonne Battle-Felton is a Lecturer in Creative Writing at SHU and her debut novel Remembered was longlisted for the Women’s Prize for Fiction in 2019. Tuesday 22 October, 6pm. The Art House, 8 Backfields, Sheffield S1 4HJ 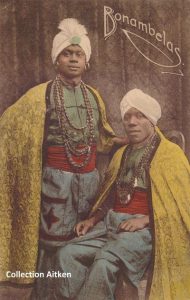 This compelling exhibition uses biographies and photographic images to make visible some of the extraordinary life stories of the black men and women and their German-born children who carved out a life worth living in Germany against increasingly difficult odds. Join Dr Robbie Aitkenf for an illustrated talk on Weds 16 October, at the Stoddart Building as he discusses the ground-breaking research behind his internationally acclaimed exhibition on the largely forgotten history of a Black Diaspora in Germany from the 1880s to 1945. This illustrated talk explores the routes and reasons that brought Black men and women to Germany pre-1914, the politics they engaged in, the lives they led during the interwar period and their fates during the Nazi period.

Join Professor Lisa Hopkins and Crosby Stevens, Honorary Research Fellow at the University of Sheffield for a beautifully illustrated talk about the use of landscape in 17th century literature and art. Take a trip into the ‘Green World’ of the Cavendish family, through the High Great Chamber at Hardwick Hall and the Elysium Closet at Bolsover Castle which transport the viewer to an interior forest. Tuesday 15 October, at The Peak Theatre, Owen Building. 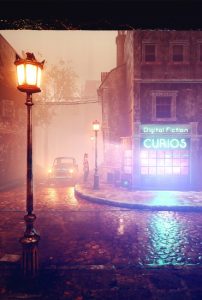 You’ll learn about the literary and technological history of digital fiction and experience the Curios for yourself in Virtual Reality. The event profiles the latest form of digital storytelling technology and explores the preservation of digital artefacts. In partnership with One-to-One Development Trust. Thursday 17 october, Hallam Hall, Owen Building.

Join Mike Berners-Lee for a practical and humorous response to environmental crisis in There is no Planet B, another one of our Environment Strand events.

Feeding the world, climate change, biodiversity, antibiotics, plastics – the list of concerns seems endless. But what is most pressing, what are the knock-on effects of our actions and, given the global nature of the challenges we face, what can any of us do? Should we become vegetarian, should we frack, does it all come down to population? Fortunately, Mike Berners-Lee has crunched the numbers and plotted a course of action that is practical and even enjoyable. Saturday 19 October, Firth Hall, Firth Court, University of Sheffield. 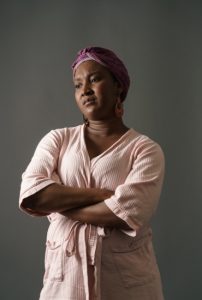 Supported by Arts Council England, Department of Humanities at Sheffield Hallam University, and Off the Shelf.

An afternoon with Jessica J. Lee, founding editor of The Willowherb Review, a literary journal dedicated to diversity in nature writing, curated as part of our Environment Strand for Off the Shelf 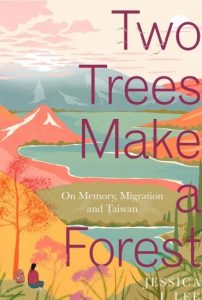 After unearthing a hidden memoir of her grandfather’s life, Jessica J Lee hunts his story, in parallel with exploring Taiwan, hoping to understand the quakes that brought her family from China, to Taiwan and Canada. Her book, Two Trees Make a Forest On Memory, Migration and Taiwan is part-nature writing, part-biography, and traces the natural and human stories that shaped an island and a family.

Another New Voice in our Environment Strand of Off the Shelf – Luke Turner’s Out of the Woods, a fierce, brave, poignant and highly original memoir about sexuality, shame and the lure of the woods. 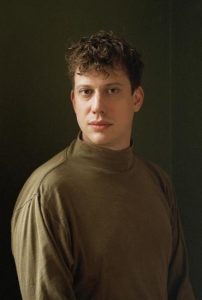 After the end of the most significant relationship of his life, the demons Luke Turner has battled since childhood are quick to return. Depression, guilt around his identity as a bisexual man and experiences of sexual abuse lead him to seek refuge and reconciliation among the trees. 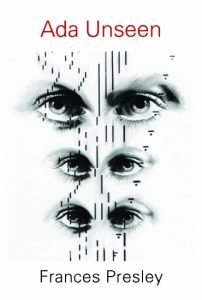 When Blue Light Falls by Carol Watts presents unique lyrical elegies speculating on a world imagined through the physics of blue light. Ada Unseen by Frances Presley explores the life and work of computer pioneer Ada Lovelace and her love of birds and music. Gathering Grounds by Harriet Tarlo emerges from fieldwork – poetry based on walking through and engaging with place. Wednesday 23 October at Quaker Meeting House, 10 St James’ Street, S1 2EW

Come if You Dare – We close our Environment Strand of Off the Shelf with Sheffield’s anarcho-nihilist, political theatre makers, Doppelgangster and our talented SHU Performance Company of 2019 for the Stage Play, Choke Me 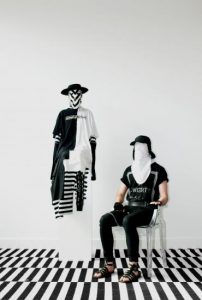 This new commission responds to the deadly effects of pollution in the Steel City. Delivering comic riffs, rapid-fire physical spectacle, an exceptional young ensemble drawn from SHU Performance students and a collection of new and appropriated texts, from raging online panic to doom-laden rituals. This pioneering work exposes smog-filled streets and blackened lungs. 23-26 October at the Performance Lab, Arundel Gate

Please click here to return to this months news bulletin