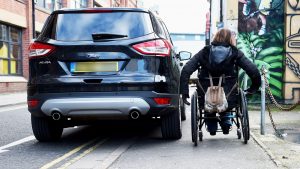 You may have seen on the news or social media lately that the government are thinking about making parking on the pavement illegal across the UK.

As a wheelchair user, I personally fully support this, at least in theory. Pavement parking, and pavement obstructions in general (bins, dog poo, roadworks etc) can be the difference between leaving the house and not leaving the house. Where I live at the moment, I know that I won’t be able to go to the local shop on a Wednesday without taking the car, because bins are left in the middle of the pavement. Increasingly it’s becoming difficult to get to the shop on any day though as people are parking on the pavement in front of their homes (despite having driveways) which blocks my path and either leaves me having to turn around and go home, or if there are two drop curbs available (one before and one after) then I have to risk traveling in the road to get around the obstruction.

I remember at a previous house where I lived for a while, I had gone for a walk with my new puppy, all was fine until on the way back there was a car blocking my path. There was no other way I could get home, so after waiting for about ten minutes to see if anyone would come out, I had no choice but to go out onto the main road to get around. Another time I was off to the pub with my then partner but that outing had to be cancelled as there was no way for me to get around the car blocking the way – the road was far too busy to risk going into it.

This issue, of course, isn’t just a problem for wheelchair users. People who use other mobility equipment such as frames or rollators are also impacted. It can also be problematic for those who use a white cane or assistance dog due to visual impairments. Parents who use pushchairs and prams, especially those that take more than one child also have to risk their child’s health and wellbeing just to get from A to B.

The COVID experience of the last few months has highlighted just how valuable being able to get out and about, even just for a walk around the block, is to people and yet thousands of people are unable to do so safely because of pavement parking.

On the other hand, I also recognise that in some streets there doesn’t seem to be any choice but to park on the pavement and I also recognise that some disabled people may have parking available further away but it would be too far for them to comfortably and safely access and these issues need to be addressed in any new legislation.

If you have any thoughts or feelings about the issue of pavement parking you can fill out the government consultation on the issue which closes on 22nd November 2020.