September 1st, 2014 | Posted by Jennifer Kennedy in IT improvements | IT preparations for teaching 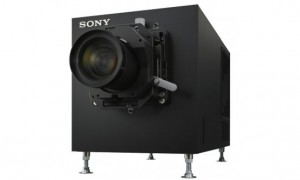 Sheffield Hallam University is now the proud possessor of a brand new 4k digital projector to augment its existing set-up. This represents a major advance to digital for the University in its history of film projection – providing a system that rivals any UK multiplex cinema. The existing set-up comprises two 35mm film projectors and a new high definition DLP (Digital Light Processing) projector, complete with surround sound.

So what’s so great about a 4k digital projector?

Well, most commercial cinemas have converted from 35mm to 2k digital projection in the last few years, not many have 4k. If a cinema boasts 3D it will probably have a 4K projector.

DCI films arrive on portable hard disk drives which are plugged into a slot on the front of the digital cinema server. The server then copies the film to its internal hard drives and can store around 10 films at a time. The films can be decrypted using keys that are sent from the distributors via email. Adverts and trailers can also be added to the Cinema server via USB sticks, or downloads from the internet and playlists can be created for each screening.

In technical terms, the DCI 4K standard has twice the horizontal and vertical resolution of 2K, with four times as many pixels overall. The main advantage of recording video at the 4K standard is that fine detail is resolved well. This contrasts with 2K resolutions in which fine detail in, for example hair is displayed poorly. If the final video quality is reduced to 2K from a 4K recording, more detail is apparent than would have been achieved from a 2K recording. Increased fineness and contrast is then possible with output to DVD and Blu-ray. Some cinematographers choose to record at 4K when using the Super 35 film format to offset any resolution loss which may occur during video processing.

So there we are; it looks better, sharper, good contrast ratio-more like film.

So how is this new piece of kit going to benefit the University?

It’s the Film Studies courses who are the primary beneficiaries of this new projector because we can now show feature films digitally which were previously available on 35mm but have been gradually withdrawn from circulation by the distributors. This is the situation that motivated Film Studies’ request for the new projector in the first place.

Also students on the ACES courses involving film production are using new MacPro computers capable of editing 4k footage at a reasonable speed. This new projector will provide an opportunity for those students to preview their work in a real life environment.

The Void is a resource that has the potential out of term to be a screening facility for film makers, games developers , directors of adverts and screen related filming. For example : http://www.sohoscreeningrooms.co.uk/

There will still be plenty of traditional 35mm film screenings along with Blu-ray and DVD screenings but now we are equipped to deal with all formats. There are not many other universities with the resources Sheffield Hallam has in The Void for teaching and learning support.