As a delegate, the world is your oyster. This year was surreal for me, as the experience is so different from volunteering. Other delegates treat you so differently (almost as colleagues), and it can be really interesting to hear other people’s projects. A lot of the people you will talk to can end up being from the BBC, Netflix or Channel 4. 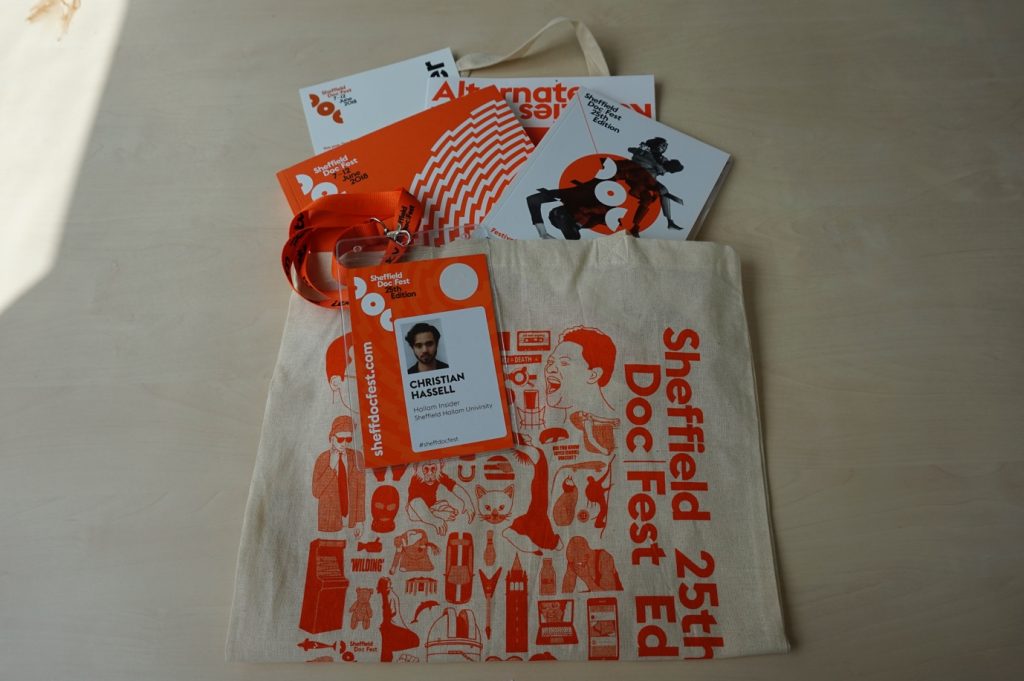 Everything in a delegate bag (excluding the dreaded promotional leaflets)

Doc/Fest is what you make it. I personally don’t have a film to sell to distributors, but I still attended all of the talks and the infamous ‘Meat Market’ which was bizarre. (The ‘Meat Market’ is effectively a large collection of sales agents & distributors willing to endorse or even purchase your film. It’s on a first come first served basis with hundreds of people in one room, so imagine how hectic it is!)

To really get the most out of Doc/fest, here are my tips I have gathered along the way.

Make sure it’s a great representation of who you are (if you are a cinematographer, you might show a beautiful image of you in a cinematic shot on the front, for example). Keep the font simple, using two colours max- and ensure you include a link to your website. 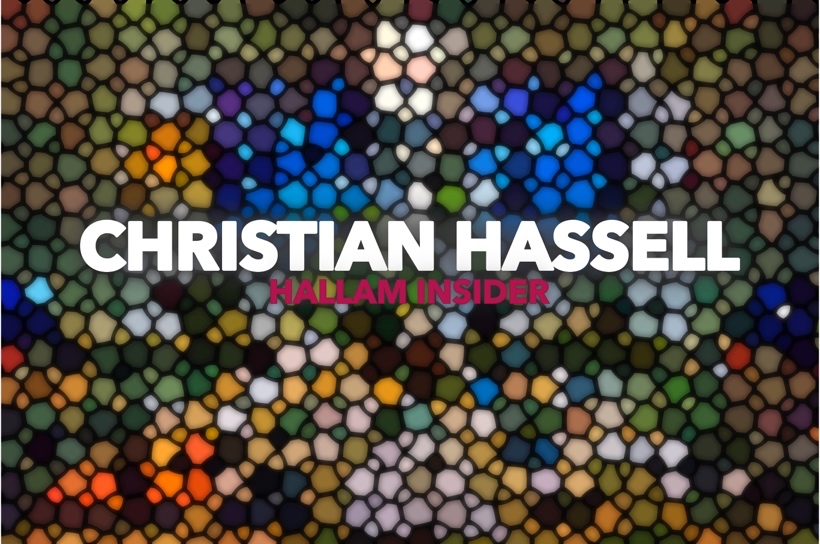 A 1-minute example of how to do a business card. A lot of the really creative filmmakers had creative and visually pleasing business cards, so keep that in mind.

Awful business card made by yours truly

You’re better spending an extra 30 minutes every morning making lunch, rather than spending at least £3 every day on food. 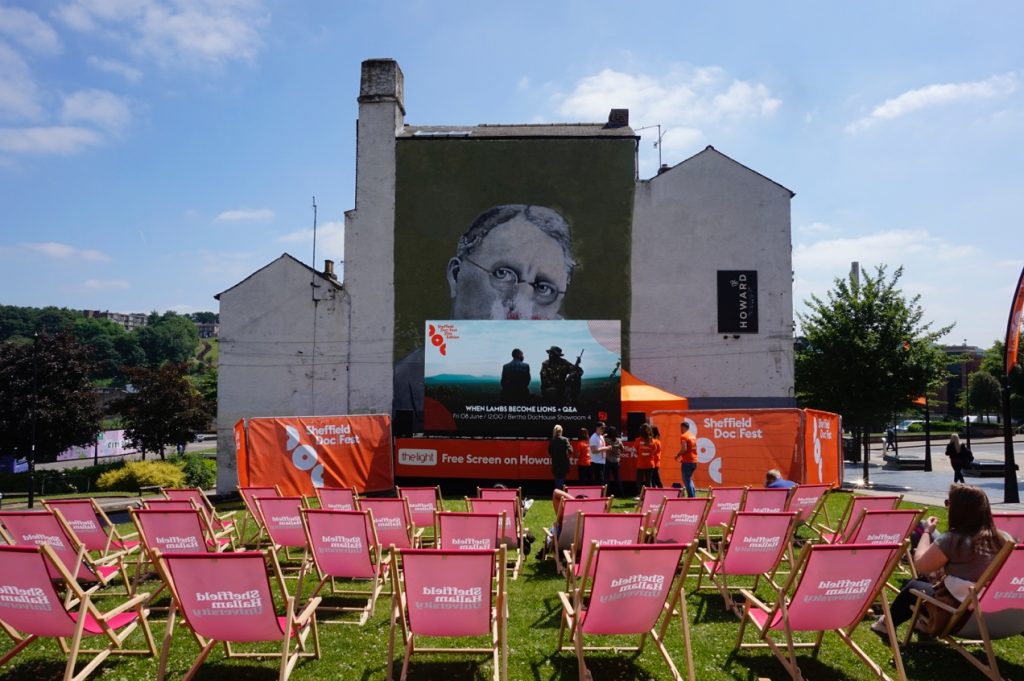 Who can argue with a free film, lunch and the beautiful sun?

3. Schedule and ask for recommendations. 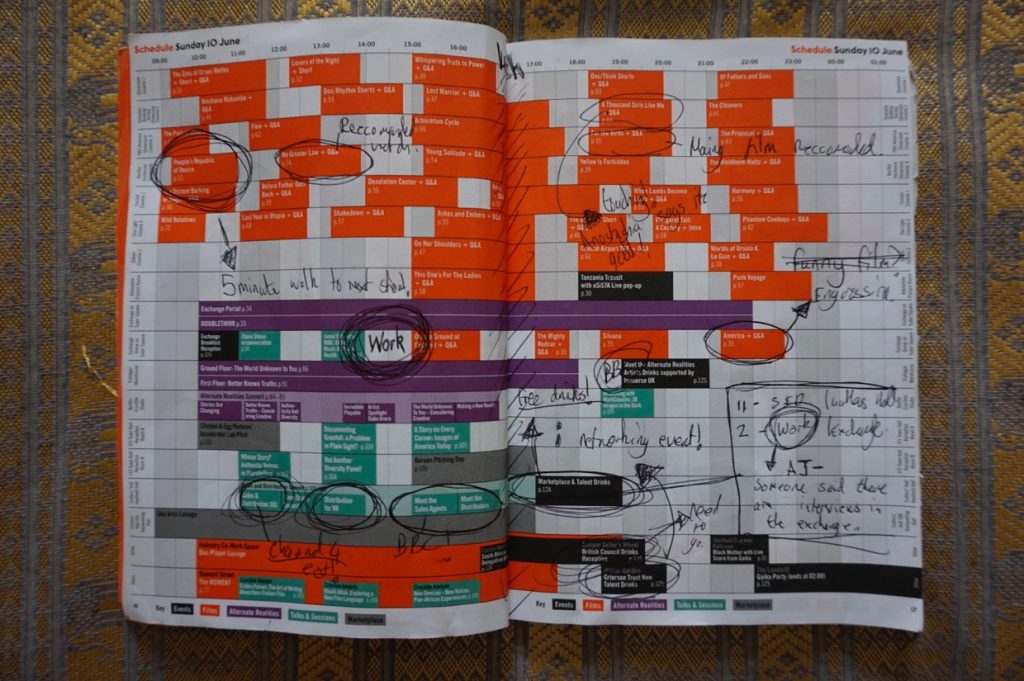 Ask for recommendations and plan your day around the focus of going to see as much as you can! Don’t forget travelling times, and also a long lunch break, as these were times where I got to meet people again.

I wrote down questions in a notebook before and during panels or films so I had something to say when I spoke to film makers (more often than not, people were amazed to see me just wanting to learn more without wanting anything). At the end of the day people love to talk and help, so make sure you ask for advice that you can’t just find online.

I met a lovely person from the Creative Skills Network who said she would refer me some work in Manchester. As she gets loads of emails, she said it could take a few weeks to reply (more often than not, these emails go missing or worse, unread). I playfully joked that I would put a silly subject header like ‘CHEESECAKE SHEFFIELD DOC/FEST’, so she knows it’s me. It got a few laughs and really helps you stand out in the moment and later down the line. Patent pending on that idea.

On the subject of emails, I met someone at Doc/Fest who planned to just email everyone in the directory, pretending to have met them. I really can’t state enough to not do this! You can fabricate a lovely story detailing how you met, and what an empowering speech the person in question made on the Q&A. But this will either show you are incompetent- because they think you’ve have emailed the wrong person- or you are playing them as being stupid. Even if you meet loads of people at Doc/Fest, you will remember who you’ve met. Be truthful. 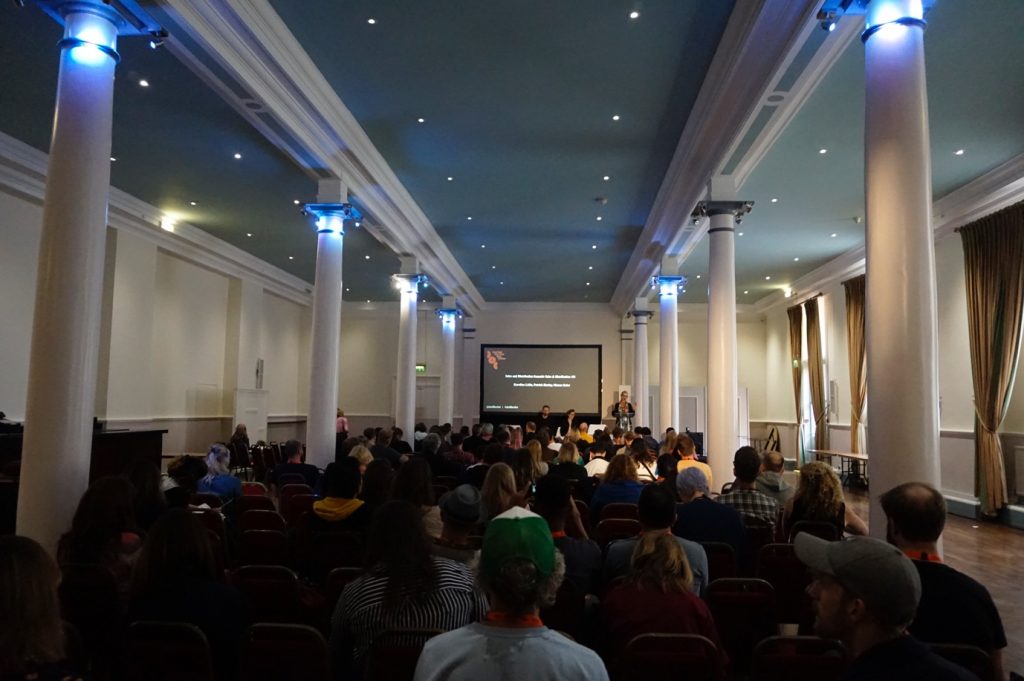 The introduction to distributors and sales agents- the acclaimed Meat Market. Which is a ‘every man and woman for themselves’ apparently!

7. Be charismatic! Get out of your comfort zone.

Be friendly and open. I would bump into people later and they would let me in the que, or recommend other events that weren’t listed to the public. I even got referred some jobs from someone I’d helped around the city. I would recommend not buying people drinks though, with how busy people usually are. If they offer to go for lunch, it’s a great opportunity to showcase yourself- but remember people are there to enjoy Doc/Fest and have a break from working, so don’t keep the topic so strong and serious. Don’t forget to exchange business cards!

I took notes of every film and talk I went to. Although I’ll keep some of them secret, there is an example below. During panels, I would write character profiles on every person to gauge how to interact with them. I would also write what they specialise in and what they offer- so in the future, if I have a film I can easily refer to their specific strengths (extra points in interviews, meetings and emails, as they become extra personal). 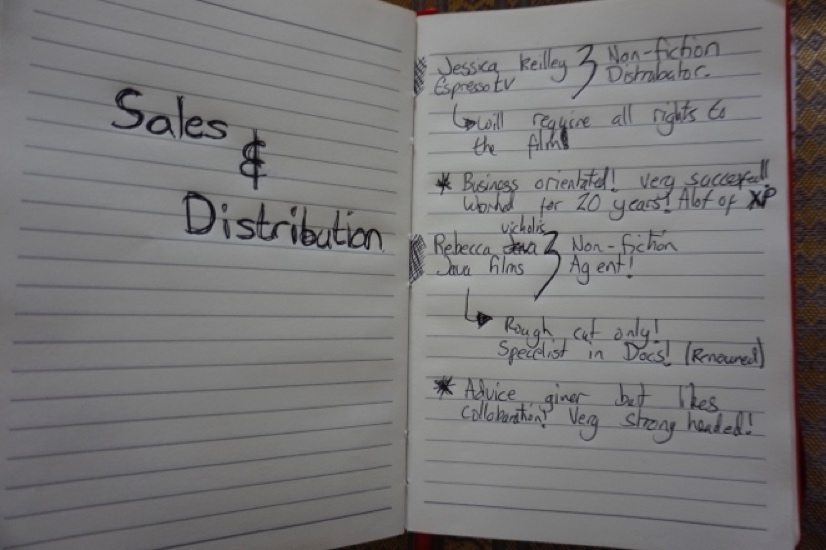 Write character profiles to help later in conversation. As you will most likely be rushed during the conversation, it’s better to plan it out first!

I took part in a virtual realities study analysing marketing data. Apparently based on my own google searches and music preference, I am 43 years old. Another amazing piece was called ‘The Moment’, a narrative based film- made and edited from reading your brain waves.

Don’t want to pay for a showing? Doc/Fest actually have a handful of free viewings at selected places. Make sure to ask around.

Doc/Fest is always full of amazing Q&As, touching documentaries, and countless networking opportunities- so make sure you get involved next year in any way you can!