We invite proposals for 20-minute papers and 80-minute panels for the fourth annual Fear 2000 conference at Sheffield Hallam University – Fear 2000: Contemporary Horror Worldwide. Hosted by staff and postgraduate students in the Department of Humanities, the conference will investigate international horror in the twenty-first century.

Fear 2000 is dedicated to revealing the significance of contemporary horror media, and has long fostered an international approach to the genre. Our first conference in 2016 featured a keynote by Chi-Yun Shin on the South Korean Epitaph (2007) and a screening of British-Irish co-production The Hallow (2015), and across our three previous events we have given a platform to research on horror produced in Australia, Austria, the Balkans, Belgium, Canada, Cuba, France, Germany, Greece, Hungary, Italy, Japan, Jordan, New Zealand, Pakistan, Poland, Serbia, Spain, Switzerland, Turkey, the United Kingdom and the United States.

This has, of course, provided only a snapshot of worldwide horror production since the turn of the century, which has been aided by the rapid expansion of the festival circuit, the rise of dedicated home-video distributors and the development of both streaming services and video-on-demand platforms. These new distribution and exhibition networks have allowed horror cinema produced all over the world to reach a wider audience, as evidenced by the recent success of films such as Raw (2016), Under the Shadow (2016), We Are the Flesh (2016), Cargo (2017), Revenge (2017), Thelma (2017), Anna and the Apocalypse (2018), One Cut of the Dead (2018) and Pyewacket (2018).

We seek papers that will investigate contemporary horror worldwide using a range of approaches that will aid in shaping perceptions of the genre’s global significance in the new millennium; we are interested in papers and panels that explore horror in both specific national and broader transnational contexts. We are delighted to announce that our keynote speakers for this year will be Iain Robert Smith (King’s College London), who will be presenting on Bollywood and transnational horror cinema, and Lindsay Hallam (University of East London), who will discuss the contemporary boom in Australian horror narratives.

The conference will take place on 1-2 June 2019. The deadline for proposals is 1 March 2019. For 20-minute papers, please submit a 50-100 word bio and a 300 word abstract (including your name, the title of your paper, institutional affiliation and any technological requirements) to Craig Ian Mann (c.mann@shu.ac.uk), Rose Butler (rose.butler@shu.ac.uk) and Shelley O’Brien (shelley.o’brien@shu.ac.uk).

We are also seeking proposals for 80-minute panels comprising three speakers; if you would like to propose a panel, please keep submissions to a maximum of 1000 words and include abstracts, institutional affiliation, technological requirements and contact information for all speakers and a chair (if applicable). Panels should be planned to run for no more than 80 minutes in length and should accommodate time for questions.

Please direct any informal enquiries to the organisers via the emails listed above. You can also find updates on our Facebook (http://facebook.com/fear2000/), Twitter (http://twitter.com/SHUFear2000/) and website (http://blogs.shu.ac.uk/Fear2000/). Please note that Fear 2000 has been traditionally associated with film, television and video games and priority may be given to papers and panels with a strong focus on screen media. However, we do encourage submissions from scholars with an interest in digital media and emerging narrative forms.

We are interested in receiving a broad range of abstracts related to global horror media in the twenty-first century, including (but not limited to):

National and regional horror cinemas of:

And particularly countries and regions rich in horror production but underrepresented at previous conferences: 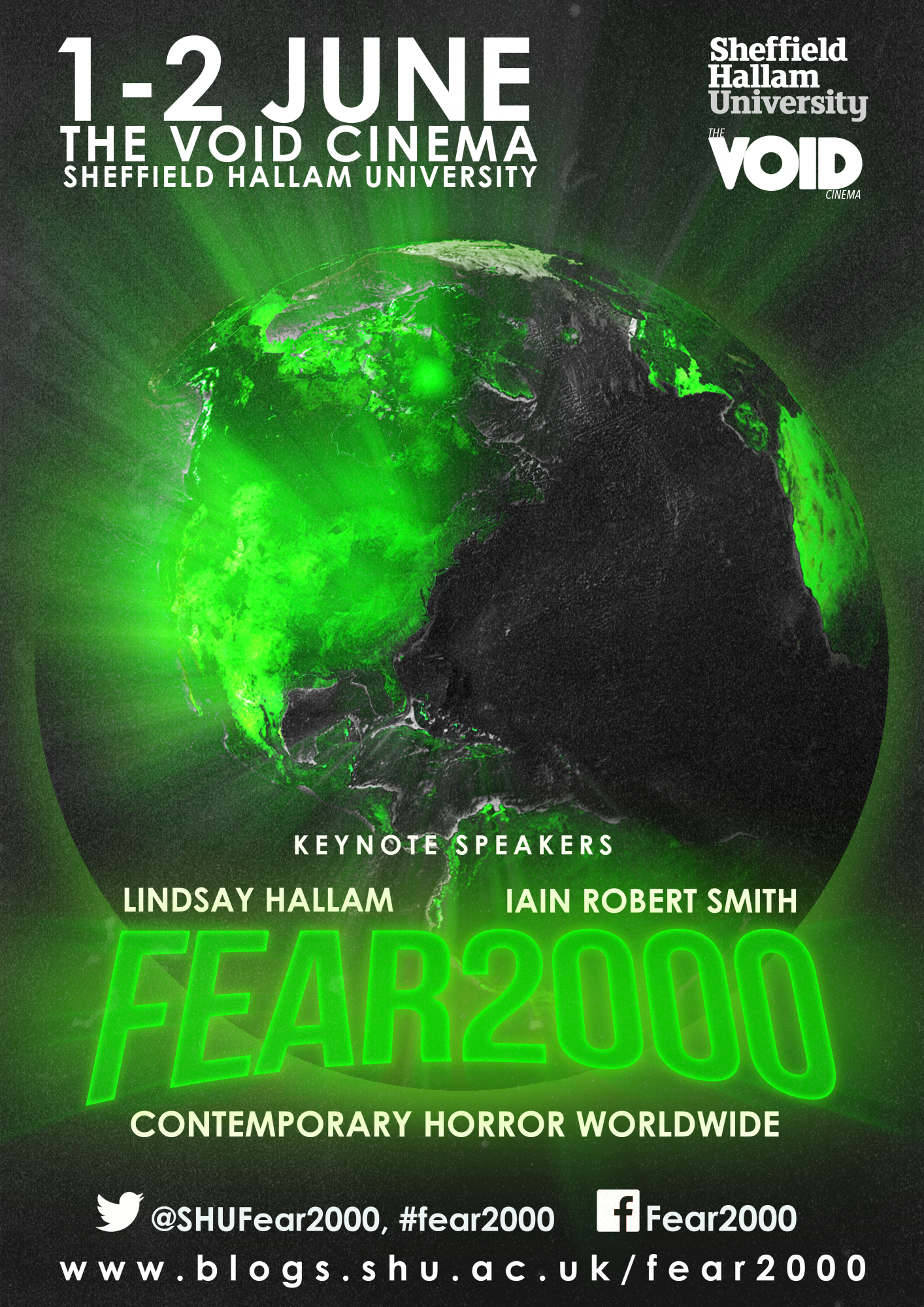