There’s an age-old saying “Self-praise is no recommendation.” Proverbs have to start somewhere so at some point, somebody must’ve been willing to shout about their success and it must’ve meant something to someone.

Last week we crowned institutional winners of The Sheffield Hallam University Student Employee of The Year Awards (SEOTY). The Awards themselves are the largest of their kind in the UK and recognise students who successfully combine part-time work with study. 81 of our students were put forward as nominees by their Manager for going above and beyond their job duties, showing leadership or having a commercial impact on a local or national business.

Sheffield once again sits at the top of the table for student employment with the city’s two Universities finishing 2nd and 3rd in the overall nominations table for 2018.

What does this mean for our students? For some, I dare say most, a job fits one purpose, an income alongside study. This year, more than any other, our students are starting to reflect on the skills they are taking from employment. We’ve heard about the competitive job market, being work ready as a graduate, being tech-savvy and digitally orientated. What is refreshing is the way that all our winners reflected on their achievements in their victory speech, with confidence and humility. Soft skills will take you far.

The labour market is increasingly consumer driven. The 2018 employer is open to those with portfolio careers and it’s accepted that stand out workers will likely have exposure to different sectors, jobs and skill sets. Yorkshire’s rich list was released by The Times Newspaper last week and emphasised the trend that fortune is increasingly self-made. The rise to wealth of those setting up their own business or believing in an idea is stark. Proof, if ever it was needed, that graduates will go far with belief and resilience, two distinguishing factors amongst those who work part-time and those who work part-time with distinction.

It is possible to have an impact working as little as 8 to 10 hours per week. Looking at this year’s SEOTY nominations, our students are proving to be a driving force behind some of the bigger issues facing the Higher Education Sector. Our Commercial Impact Award winner won her award for bringing an estimated £1 million of new business to a company specialising in mental health and wellbeing. The winner of the Above and Beyond Award is a true ambassador, promoting the value of getting into further education amongst school children through sports coaching in the community. The ability of our students to apply themselves through part-time work and champion their own experience of higher education is admirable.

Work experience is as much a part of an education as learning a system or reading a textbook. It allows students to build relationships on a professional level and the confidence gained from seeing the reward in working is markable. Our students have to work, it’s no longer a desirable.

On campus, our student casual payroll paid 402 individual students last month. Between them, these students worked over 4000 hours in paid part-time work, working for teams on campus at Sheffield Hallam University. The demand for work is on the increase and through initiatives like SEOTY, the importance of a successful working partnership between students and employers is becoming ever more prominent.

The 2017 national SEOTY winner is a Sheffield Hallam student. At the time, 1st year Law student Nabeela stood out as a clear winner for her work with young people as part of The National Citizen Service (NCS) programme. Students are leading by example and working as advocates for the importance of getting out there and doing something meaningful. They may not identify it at the outset but they are resilient in a time where it’s easy to become insular in an uncertain political and financial labour market. Nabeela featured via video at our awards evening and summed up exactly what a SEOTY Award can do for the confidence of a student, “When I went to interviews I was able to say, I’m student employee of the year, hire me!”. A stand out example that work experience at any level of study is valuable both to the individual and a business. 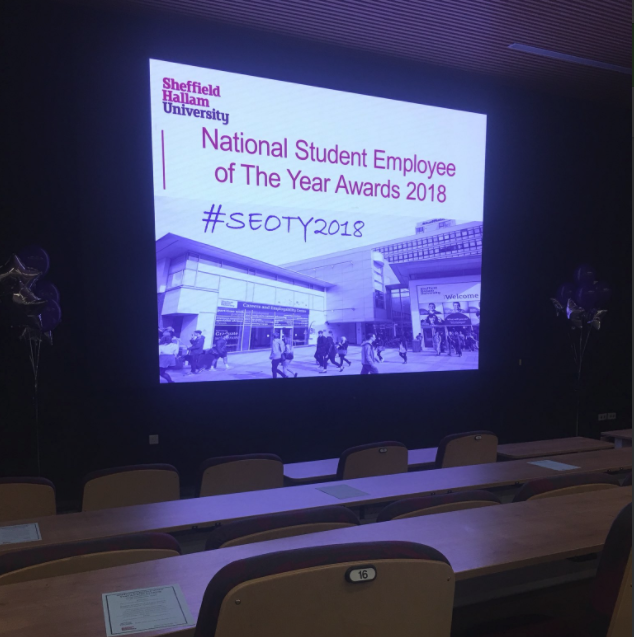 The SEOTY Awards are now at a regional stage where winners from institutional awards will compete across the country to be named as National Student Employee of The Year 2018.

Winners will be announced at The National Association of Student Employment Services (NASES) Conference in July. For more information, head to www.nases.org.

If you’re a student, look at the hundreds of part-time on campus and off campus job roles advertised on UniHub. You could be the next SEOTY Awards winner!

If you’re an employer, you can benefit from flexible, casual workers and advertise for FREE today.